Recently we reported that Jaggi Vasudev, popularly known as Sadhguru is going on a 30,0000 km ride. In an attempt to raise awareness on the global issue of soil depletion, the spiritual leader has started his motorcycle tour from the UK to India. The 64-year old spiritual guru started riding on a BMW K1600 GT motorcycle, which witnessed a flag-off at the Parliament Square in London.

The rider will go on for about 100 days and is a part of the Save Soil awareness campaign initiated by the Isha foundation. It intends to draw attention to the rising concerns towards the degradation of soil. The route of this motorcycle tour will go through various prominent European cities like Amsterdam, Berlin and Prague and the Middle East. Apart from the motorcycle tour, Sadhguru will also attend a series of events scheduled in the cities coming along in the route.

Sadhguru intends to conclude this ride in time for Summer Solstice at the Cauvery Calling Project in Tamil Nadu on June 21st. The highlight of this event is the plantation of 2.42 billion trees within the farmlands surrounding the Cauvery River Basin, which is one of the key events in his campaign for revitalizing the soil. 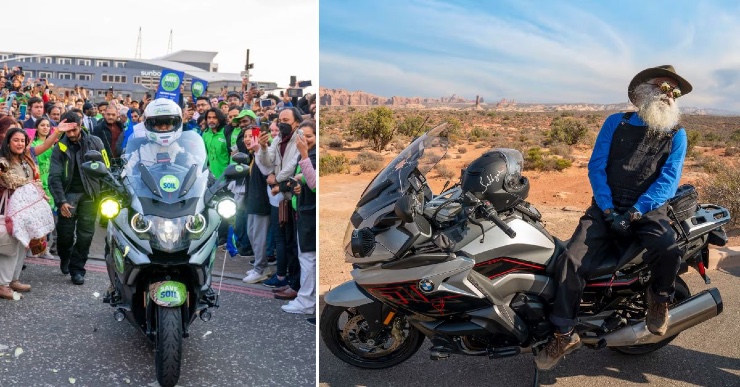 Sadhguru is also aiming for a homecoming in New Delhi as the finish point to commemorate the 75th anniversary of independence in India. With this ride, he hopes that any positive policy for soil preservation is introduced by the global responsible leaders and organizations, which he conveyed in his interview with journalists at the Indian High Commission in the UK.

It is not the first time that Sadhguru’s love for motorcycles is out in open. The spiritual leader, whose full name is Jagadish Vasudev, is an avid motorcyclist.

Jaggi Vasudev or Sadhguru used the BMW K 1600 GT when he was visiting the USA. It seems like he is going to use the same motorcycle for his onward journey to India. While BMW sells a lot of different models in India, the K 1600 GT never made it to the Indian market.

This is one of the most luxurious and heaviest motorcycles that he has been spotted riding in recent times.  The BMW K 1600 GT weighs a massive 350 kg but since the weight distribution is towards the front, it is extremely stable on the straight highways, which makes it a perfect choice for cross country rides. The BMW K 1600 GT was never officially launched in India. However, its more loaded sibling, the K 1600 GTL came with a price tag of Rs 30 lakh, on-road.

What is Save Soil Movement?

The 30,000 km long motorcycle tour headed by Sadhguru is a promotional part of the Save Soil Movement, an integral part of the Conscious Planet Initiative led by the spiritual leader. The campaign aims at bringing people’s attention to the depletion of soil and unfortunate desertification of many places, which have resulted in severe cases of drought and degradation of cultivable soil. Backed by World Food Programme and United Nations Convention to Combat Desertification, this campaign also calls on world leaders for prioritizing the concern of soil regeneration through long-term government policies.