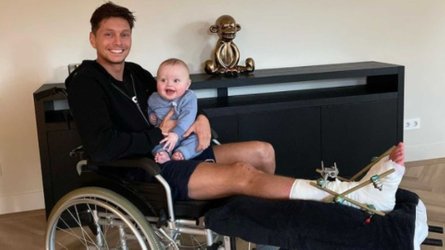 Michael van der Mark’s leg is broken, leaving him in a wheelchair for the time being. His condition will be monitored over the next few days to see when he will be able to mount up back on the saddle to compete in the World Superbike Championship (WSBK).

While his teammates, Scott Redding, Eugene Laverty, and Loris Baz, were out testing the BMW M1000RR in Misano in the previous week, van der Mark will be at home recuperating after a rather gnarly mountain bike crash. The accident left van der Mark’s lower right leg broken last Sunday while training. The BMW racer is now fine after being rushed to the hospital to receive treatment.

Van der Mark underwent surgery in order to get his leg fixed up, and he was eventually discharged about two days after his accident on Sunday—Tuesday, March 15, 2022. Doctors used an external fixator to help the fracture in his leg to heal. The fracture was complex and required an external apparatus to hold the bone in place in order for it to heal properly. Sources assumed that the fracture that van der Mark suffered was complex, which means that his tibia was likely fractured in multiple places (ouch).

However unfortunate the accident was, Michael van der Mark seems to be in high spirits holding his son, Mason, on his lap in an Instagram post. Van Der Mark is recuperating at home for the time being, and BMW Motorsport Director, Marc Bogners, stated that the organization will be monitoring van der Mark’s condition over the next few days.

The Dutchman will miss out on the rest of the BMW test days for March, and it’s very likely that van der Mark will also miss out on the April test days in MotorLand Aragon in Barcelona, Spain—unless the 2014 world champ’s leg heals lightning quick.

It looks like the fracture van der Mark suffered means that he will miss the first practice sessions of the 2022 WSBK season happening on April 8, 2022. The sessions will be conducted in Aragon, Spain. It’s unclear when van der Mark will be able to rejoin the rest of his teammates on the race track once again, and it’s also unclear whether van der Mark will be in good shape to compete. We’ll just have to sit around and wait, I guess.