Perhaps there’s still room for the true small efforts in IMSA. Gino Manley–by day the used car manager at a dealership in Jacksonville, Florida–and a group of friends made it to this year’s big weekend at Daytona, driving an Audi RS3 in the Michelin Pilot Challenge race this past January.

Gino works with AOA Racing, an Atlanta race rental outfit. “We run a few MX-5 Cup cars–ex-Skippy cars–that we rent for track days and run primarily in WRL,” he explains. Last year, the team had the opportunity to buy a used TCR Audi. They planned to run it with World Racing League.

“Once we had the car,” he continues, “we realized it was still IMSA eligible.” Funded co-drivers allowed the team to run the Audi last year at the Petit Le Mans and season-ending Sebring race.

“This year I really wanted to do Daytona,” Gino continues. “I’m Jacksonville-based, and it’s my home track.” But he couldn’t find any funded co-drivers, so about two weeks before the event, he pulled the plug on the effort.

Two of his friends, driving coaches Patrick Wilmot and Andrew Pinkerton, posed a question: If they raised the bare minimum to cover costs, could the three of them run at Daytona? 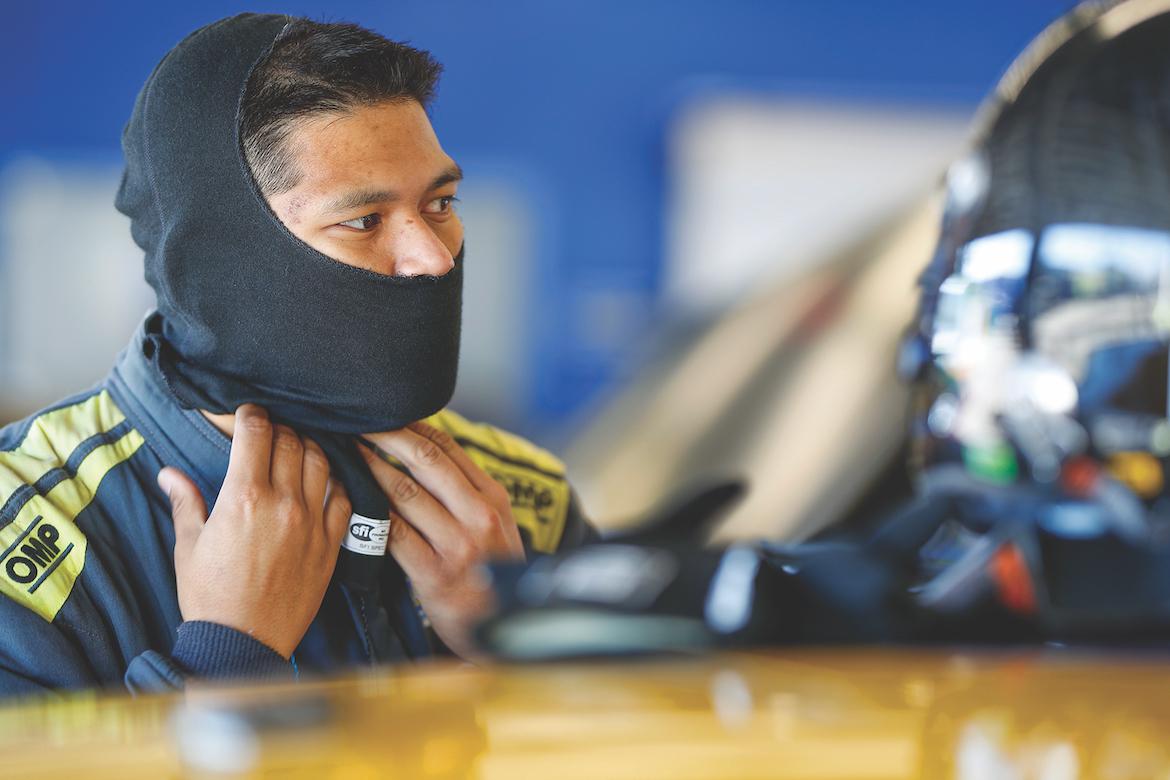 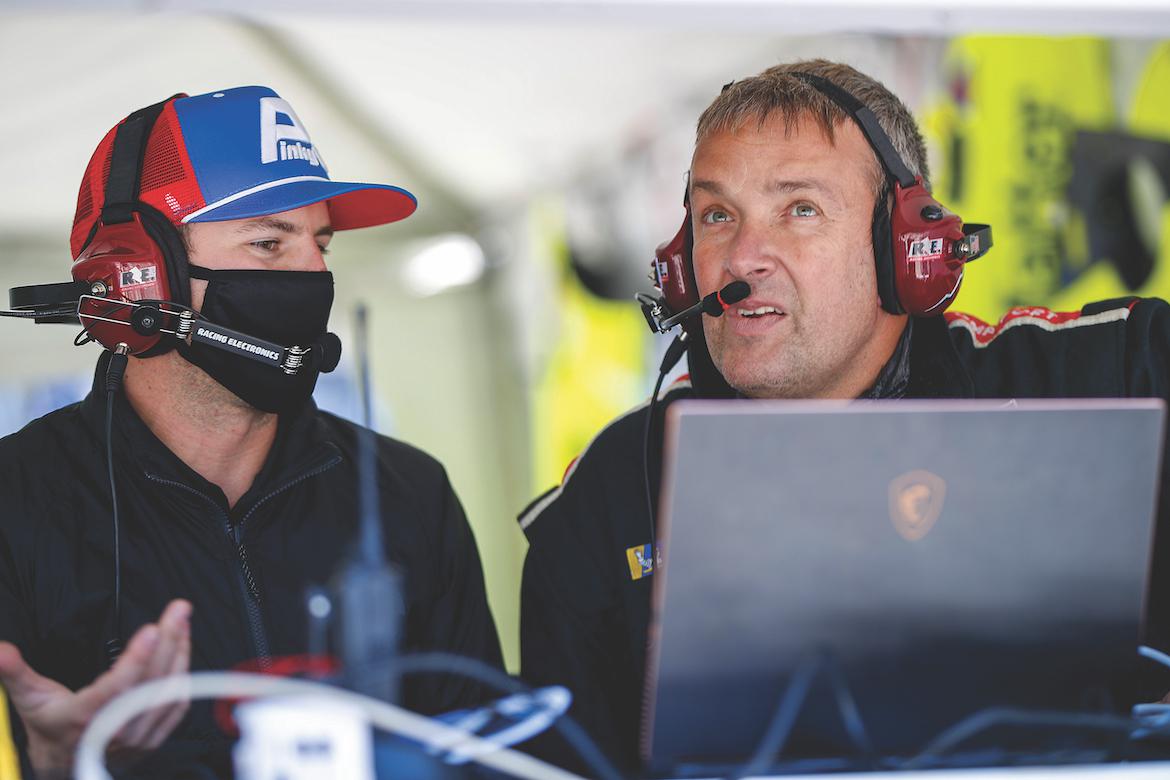 Gino Manley, in the balaclava, and his friends had an idea: Why not race their used Audi at Daytona during the big IMSA weekend? So they did. Photography Credits: Motorsport Media

“So last minute, we collected small dollars from sponsors, parents, friends and our savings,” Gino says. “We missed the entry deadline because we didn’t have enough to enter by the Friday before the race.”

John Doonan, president of IMSA, approved the late entry. “He actually came by and introduced himself and said IMSA needs more of this,” Gino notes.

“We had no spares,” he explains, “and could only afford four sets of tires. The tires we did practice on were tires we finished Sebring with last year. We don’t have a hauler; we have a 2005 GMC dually that pulls a plain enclosed trailer.

“We came down knowing we didn’t have enough crew to do it and found volunteers once we got here. By happenstance, we ran into Johnny C., owner of Nine Lives Racing, and he became our fuel guy.

“We didn’t have an engineer or strategist, so Pinkerton called the strategy. Our engineer was a democracy: We would make a setup change and put it to a vote since none of us really knew what to do.”

The team’s transponder acted up during qualifying, so they started the 4-hour contest last: 17th on grid. By the end of Gino’s stint, they were running fourth in class. “Patrick Wilmot got in and for about an hour battled for P4 and kept us in the top five,” Gino adds. “A fuel pressure issue rained on our parade, and we limped home to P7. Still a great result, but we know we had a podium.

“We did this race probably on a quarter the budget that all the other teams did. But we had a great time and are proud of what we accomplished.”

View comments on the GRM forums

Thats really cool!  I respect the guys making it happen with no budget more than the big money names.

One of my racing mentors did the 24hrs (early 80s) in a similar manner. Always cool to read stories about the minnows on the grid.

Cool story, I sometimes feel like them at the amateur level, at the end of they day they had a great time, which is good to hear.

curious, what is the entry fee that they had to raise?

I really love stories like this and would love to read a more detailed account of their weekend.

I can remember when half the field at the Daytona 24 and Sebring 12 were SCCA club racers.

Glad that you enjoyed it. Fun piece to put together. We need to do something on Gino’s latest ride: a P71 track car.

This comes up from another article, and I remember this coming out in the mag and thinking how cool it was.

As asked upstream, how much is the entry fee for this race or the Petit etc?

No spares means little (lol, yeah I know, the car is going to be quite costly) money, just feeding and sheltering a crew and the tires and gas, yes? Would be really neat to know how cheap someone could do an IMSA race for these days.

And good on IMSA for allowing a late entry like this! 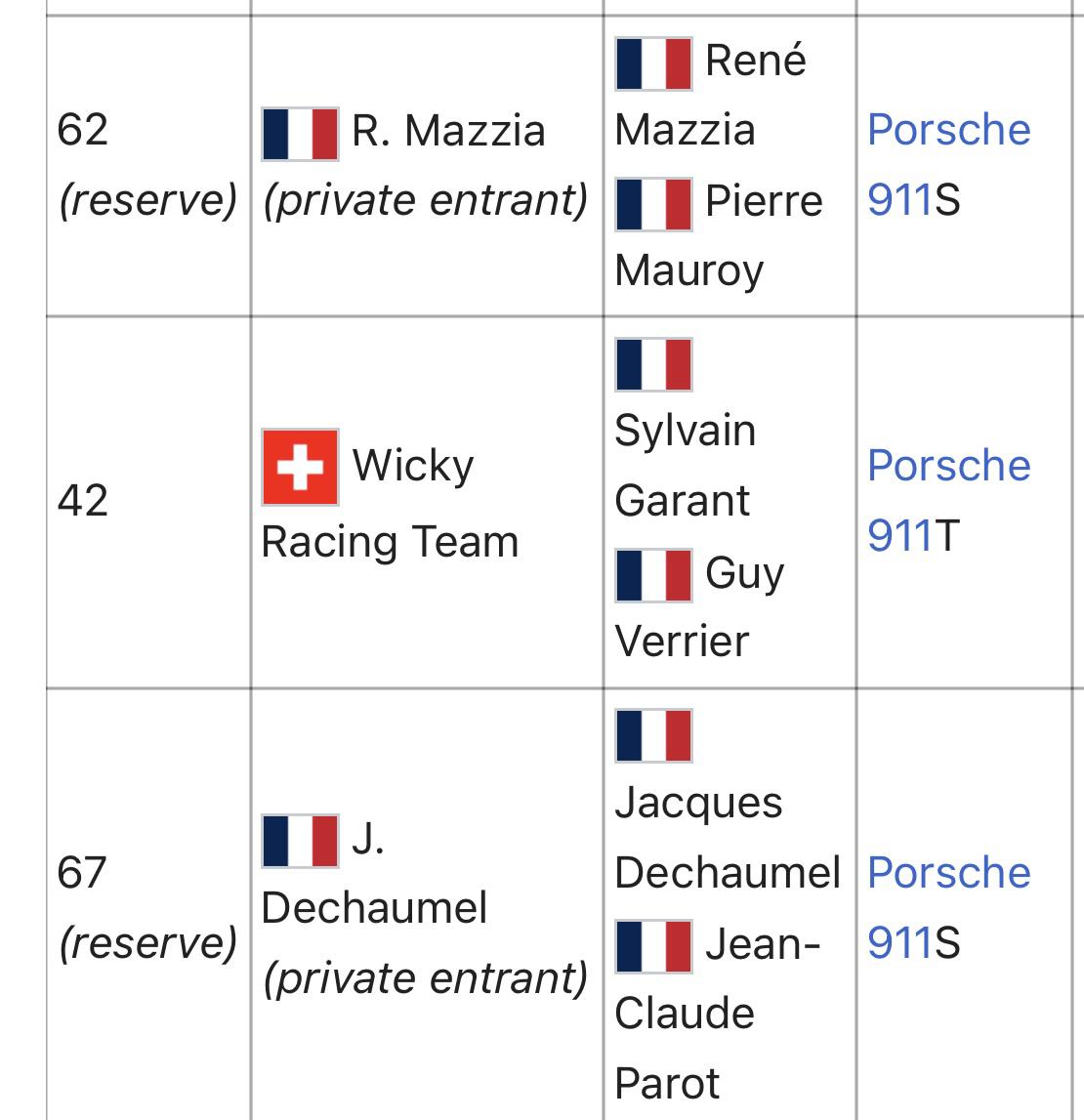 A big expense for teams: You gotta get your people and the car to the event. The hauler doesn’t care what’s inside. It just needs a steady diet of diesel. And don’t crash or brake anything, of course.

So, good news: Yesterday, Gino announced on FB that they would again be racing in Friday’s BMW Endurance Challenge at Daytona, so go out and root for the #85 this Friday!

A buddy of mine ran Daytona a number of times in the late 80s early 90s just like this. Used car at the end of its eligibility, shoe string budget, and a few buddies with some funds. I thought these days were gone. Gives me hope.

Sooooo, what was their budget? What was the actual expense of running like this for the event?

I am a slow-ass wanabe who has spent the last five years on road circuits and in Skippy/Bertil Roos schools trying to find my way to vintage racing with HSR/SVRA in 2023.

Gino does not know me, but, back when I was still on FB, he was a total gentleman who answered my moronic questions patiently and respectfully. Among the many pro drivers, crew chiefs, fuel can gorillas and shop-sweepers that I know, ALL have a universally high opinion of Mr Manley.

Just thought that needed to be said.

As far as this article and how Gino could run with the “big boys” on a low budget….. talent and drive are worth a transport truck full of budget money.

Andrew Pinkerton, aka “Pinkie”, may be the quickest driver that you have never heard of until now…..