Charles Leclerc claimed his third F1 career victory – his first since 2019 – with Carlos Sainz succeeding in making it a Ferrari 1-2 after a dramatic climax to the 2022 Bahrain Grand Prix.

Leclerc had been in the lead for virtually the entire race, after fending off multiple overtaking attempts from Red Bull’s Max Verstappen running in second.

But in the final moments a series of technical issues kicked off, first for Pierre Gasly whose AlphaTauri caught fire triggering a safety car, and then synchronised engine failures for Verstappen and his team mate Sergio Perez.

It meant Mercedes’ Lewis Hamilton picked up an unexpected podium in third ahead of team mate George Russell, and Kevin Magnussen marked his return to F1 with fifth for Haas.

The setting sun was painting a golden sheen on all 20 cars lining up on the grid at Bahrain International Circuit for start of the first race of the 2022 Formula 1 season. They were all looking very different from last year’s contenders after new rules and regulations came into effect over the winter – but how would they actually perform when it came to the crunch? 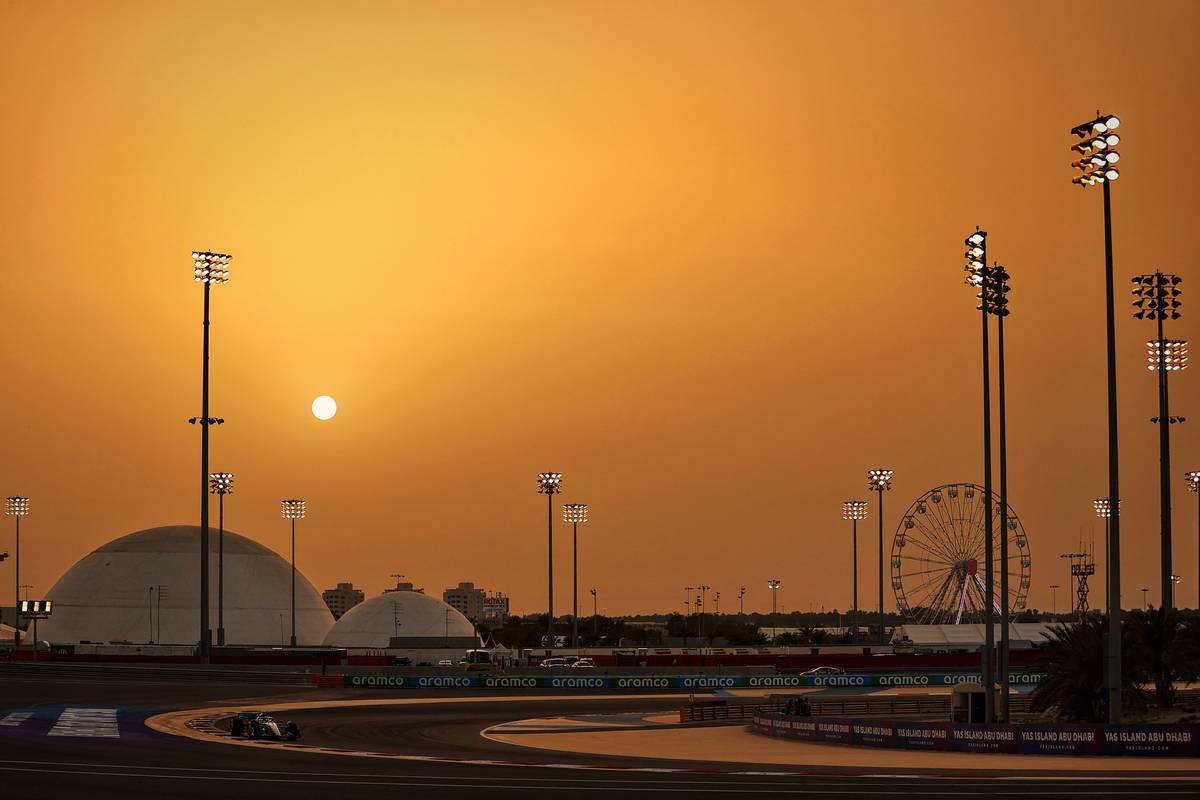 Qualifying had already established the new pecking order in terms of one-lap speed, with Ferrari and Red Bull coming out top: Charles Leclerc was on pole with Max Verstappen second, their respective team mates Carlos Sainz and Sergio Perez dutifully aligned behind them. Mercedes’ Lewis Hamilton was fifth, and the cosmos showed an impish sense of humour by putting his former team mate Valtteri Bottas alongside him in his new Alfa Romeo. Everyone was on soft tyres for the start, with the exception of the struggling McLarens of Lando Norris and Daniel Ricciardo further back in 13th and 18th.

But single lap speed was one thing – how would the cars fare when it came to race pace and reliability? And did the teams have some strategic tricks up their sleeves? The only way to find out was to go racing once the lights went out…

It was Verstappen who got the better start, but it still wasn’t good enough to allow him to find a way past Leclerc into the first corner. Hamilton had more luck attacking Perez for third, and the Mexican lost a further spot to Kevin Magnussen in the Haas. George Russell had gained a couple of spots to put the second Mercedes up to seventh ahead of AlphaTauri’s Pierre Gasly and the Alpine pair of Fernando Alonso and Esteban Ocon (who had collided with Mick Schumacher in turn 6, sending the Haas spinning and earning himself a five second penalty). However it had been a nightmare start for Bottas, who had lost eight places and tumbled to 14th. 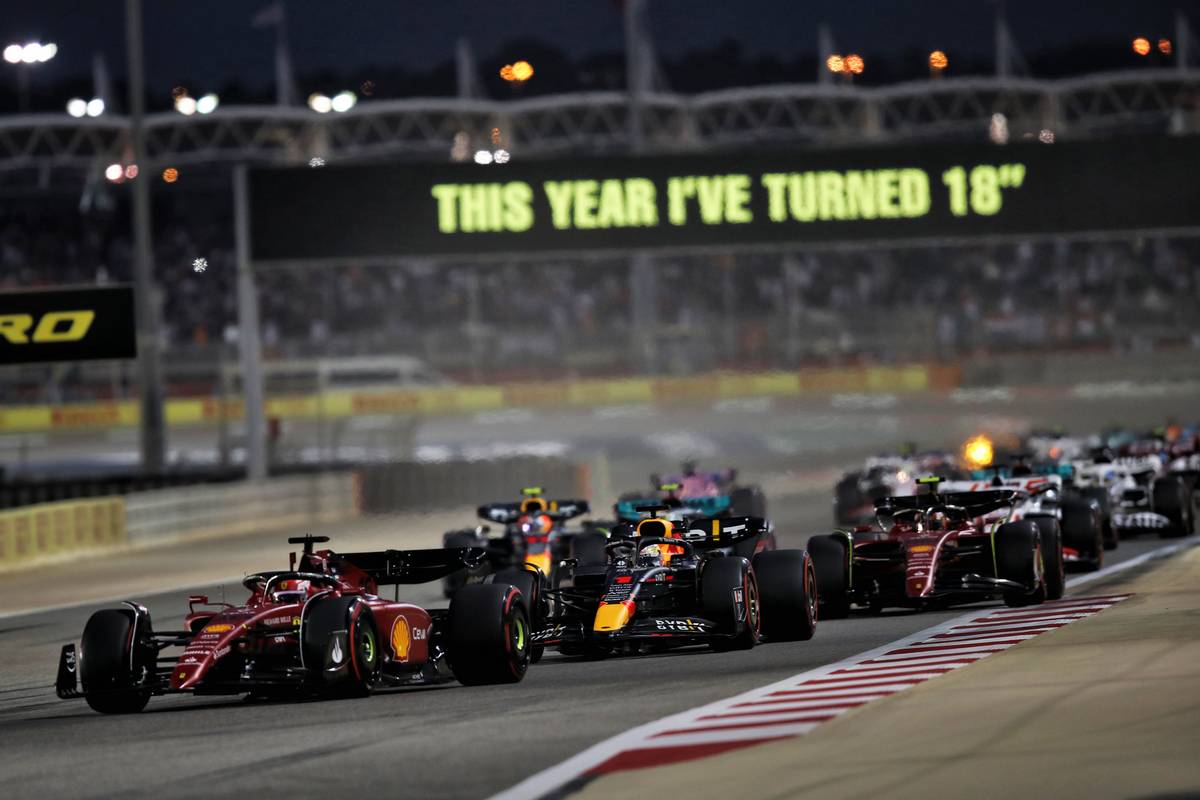 A lockup for Magnussen allowed Perez to reclaim one of his two dropped spots going into turn 4 on lap 3, Russell applied more pressure on the Dane and was rewarded by the Haas going too deep into turn 1 at the start of lap 5 making it an easy pass for the Briton. At the front, Leclerc was managing a two second lead over Verstappen and the pair had begun pulling away from Sainz who was busy fending off a DRS-enabled Hamilton, with Perez watching on behind ready to pounce if opportunity knocked. BY lap 10 he was bored of waiting and took matters into his own hands with a pass on the Mercedes which was struggling with rear tyre wear.

Bottas had begun his recovery drive, with a nice pass on Williams’ Alex Albon putting him up to 12th behind Yuki Tsunoda. The Finn’s rookie team mate Guanyu Zhou was also proving his mettle and was soon up to 13th dropping Albon to 14th ahead of Schumacher and Aston Martin duo Lance Stroll and Nico Hulkenberg. The McLarens were really suffering, Norris having sunk to 18th ahead of Nicholas Latifi and Ricciardo looking utterly lifeless in last place.

Lap 12 saw the first of the pit stops with Hamilton coming in for a set of hard tyres, only to be caught out by how cold and lacking grip they were. It caused him to squirm through turn 1 when he came out of pit lane, and drop additional places to the two Alfas as a result. “No grip on this tyre,” a frustrated Hamilton confirmed over the team radio. 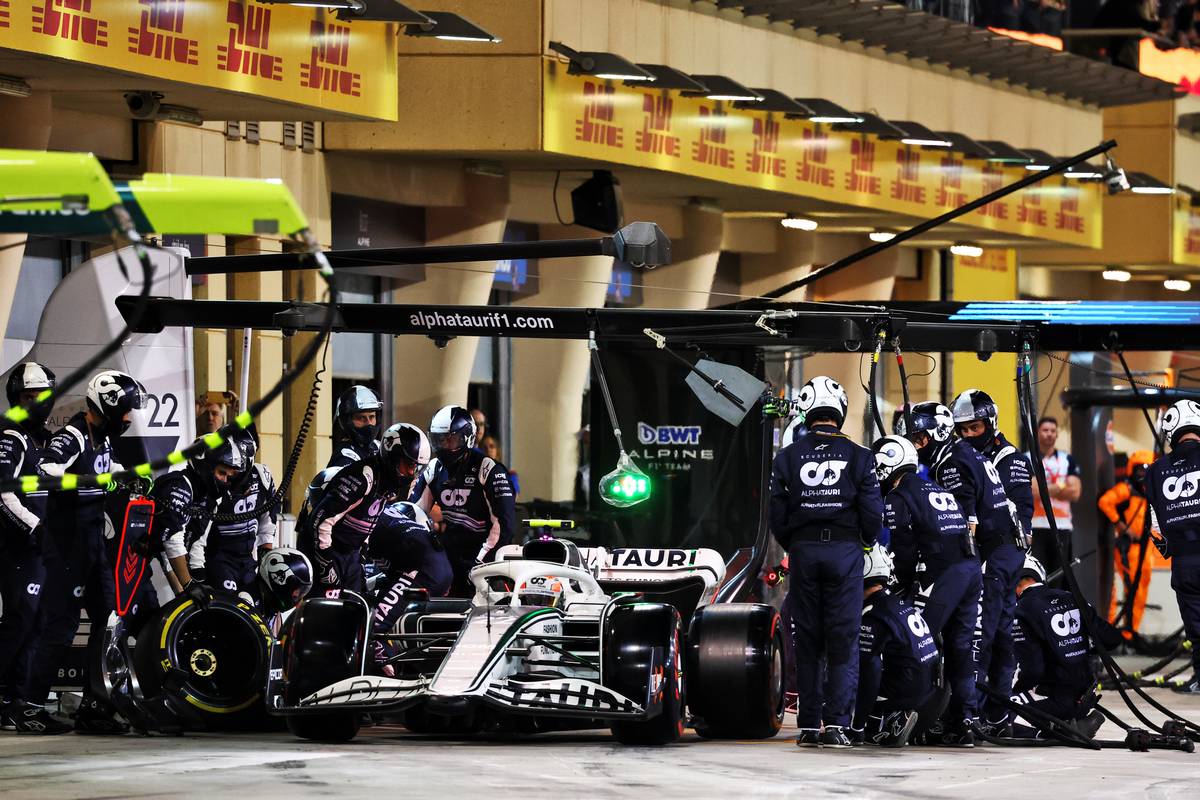 Other drivers were also starting to struggle with tyre degradation. Verstappen was in on lap 15 but opted for a second set of softs – meaning a second stop was now unavoidable – and Sainz followed suit. Leclerc stayed out one lap longer and he too stayed on the soft compound when he came in, while Perez opted for the medium compound when he he too came in for service.

Leclerc returned to the track just ahead of Verstappen, but the undercut set the Red Bull up nicely for a successful strike into turn 1 on lap 17 – only for Leclerc to pull off a counter attack around the outside of turn 4. Verstappen tried a refined version of the same move next time around and took the lead again – only for Leclerc to mount another successful retaliation to retake the lead. Verstappen tried it a third time on lap 19 but from too far back, and the lock-up made it easy for Leclerc to snatch the lead back once more, and this time the Dutch driver was forced to accept the status quo – for now – because of te flat-spotted tyres and spiralling brake temperatures.

By lap 20, Leclerc and Verstappen were now eight seconds clear at the front from Sainz and Perez. Hamilton had dropped off the leaders but was back in fifth ahead of Russell who was the only other driver to have switched to the hard tyres. The top ten was rounded out by Magnussen, Gasly, Alonso and Ocon, with Tsunoda still in 11th ahead of Bottas and Zhou. Schumacher meanwhile was in 14th ahead of Norris who was the only driver not to have made a stop so far. He finally surrendered on lap 26 and came in for a set of hards, signalling he was going for a one-stop strategy, even as Sainz was telling the Ferrari pit wall that “We should think about three stops.” 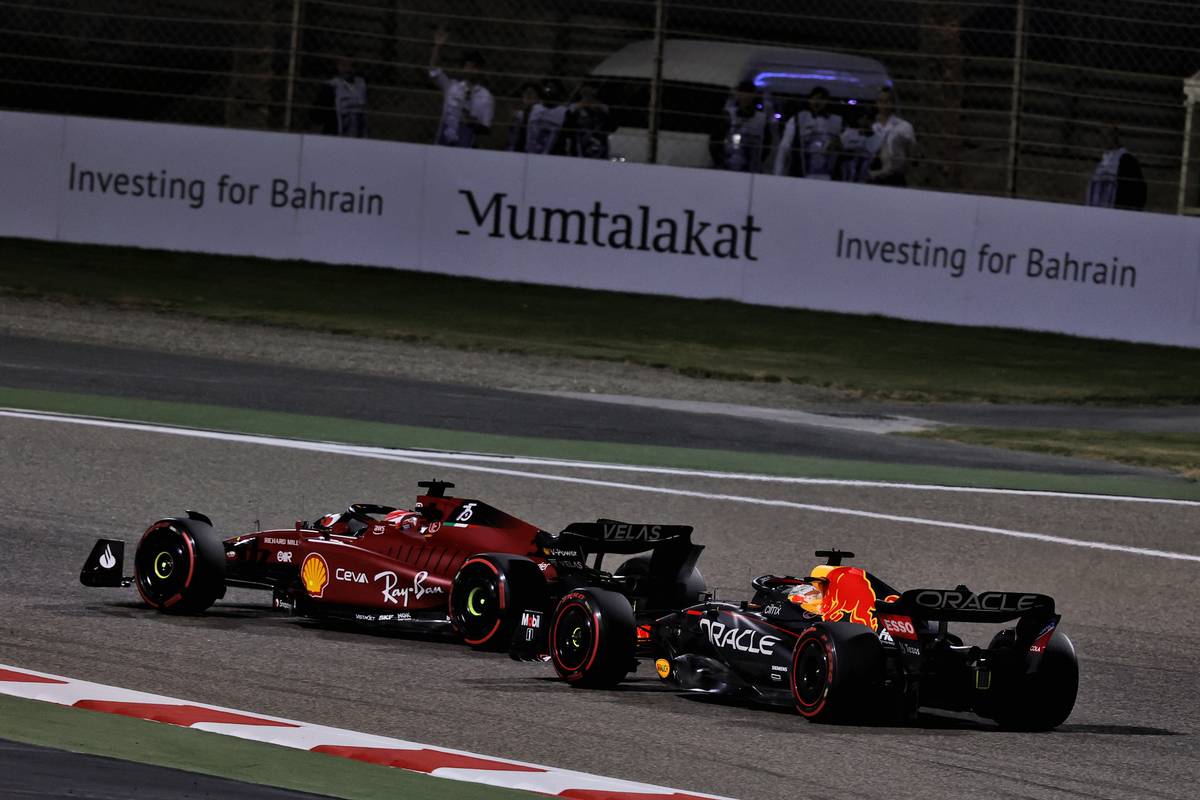 Alonso was the first driver to make a second stop one lap later, having not liked the feel of the medium tyres on the Alpine and opting to go harder. Hamilton was next in on lap 28, switching from the hard tyres to the mediums and dropping him to eighth for the time being. Verstappen was in for a change of tyres on lap 31 and also went for the mediums, which he was cold to be careful with on the outlap or risk shredding his tyres.

Leclerc responded immediately by pitting next time by for a rapid service that allowed him to maintain a one second advantage over the Red Bull, to Verstappen’s intense frustration: “Okay this is now two times I have taken it easy on the out lap and I could have easily been in front. I’m never, ever doing it again!” Max was told he was “free to push now”, even as Perez came in for a second stop of his own on lap 34 at the same time as Sainz.

Perez was the only driver in the top nine to opt for softs, everyone else having converged onto mediums. By lap 37 Leclerc had restored a two-second lead at the front over Verstappen followed by Sainz, Perez, Hamilton, Russell, Bottas, Zhou and Magnussen, with Gasly in tenth on a set of the hard compound as were Alonso and Ocon running just behind him. Bottas and Zhou then made their second stops which dropped them to 12th and 13th behind Tsunoda.and just ahead of Stroll. With 20 laps remaining, the rest of the field – Schumacher, Norris, Hulkenberg, Albon, Ricciardo and Latifi – had already been lapped by Leclerc. 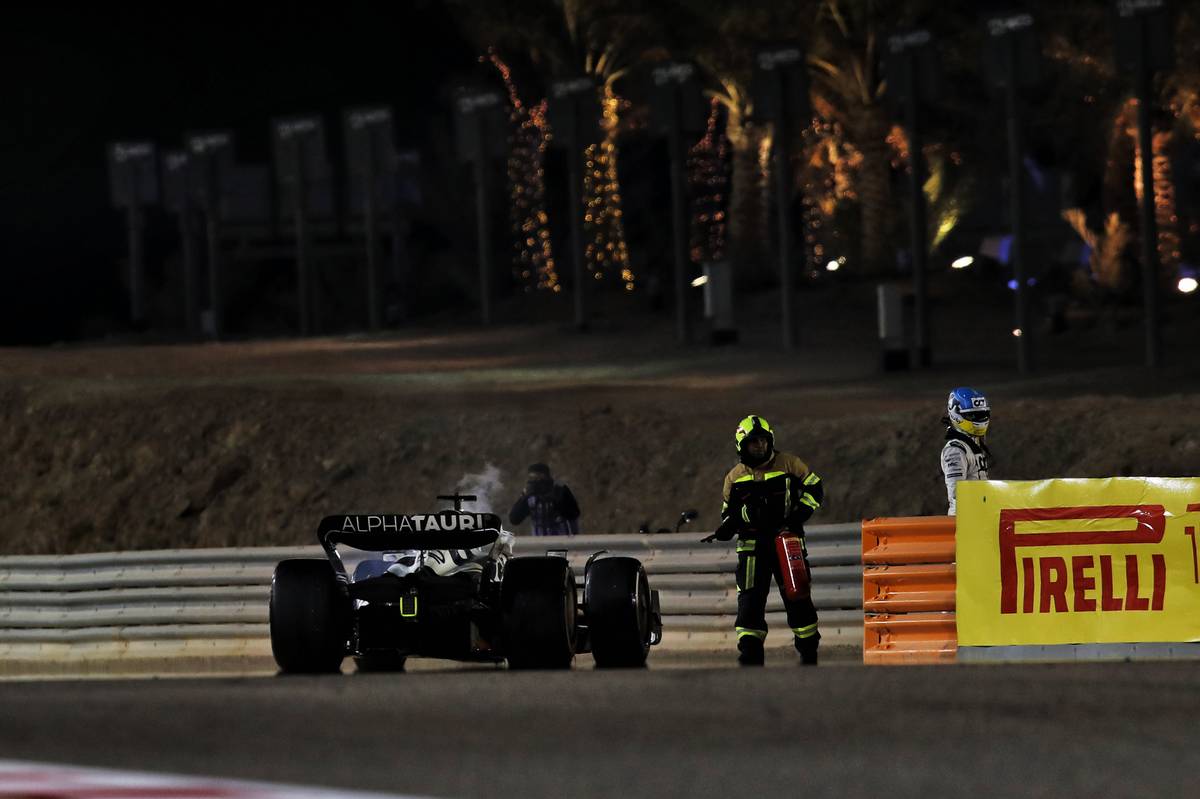 Red Bull brought both drivers in on lap 44 for one final roll of the dice and a switch to a used set of softs while Ferrari split strategies with Leclerc staying out but Sainz pitting. An anxious Verstappen was on the Red Bull team comms with talk of a ‘heavy wheel’, but there were bigger problems elsewhere as the back of Gasly’s AlphaTauri caught fire and came to a halt at turn 3 to trigger the first safety car of 2022. That allowed Leclerc to make a stop after all, while Red Bull continued to work the problem on Verstappen’s RB18. “We are staying out, we don’t believe it is a reliability concern,” said his race engineer who said it looked stable and wasn’t expected to become terminal.

Leclerc was unhappy with the slow safety car, which he nearly ran into the back of as the drivers prepared for the restart with Leclerc leading Verstappen, Sainz, Perez, Hamilton, Russell, Magnussen, Bottas, Ocon and Schumacher after a flurry of opportunistic pit stops, with Tsunoda left just out of the points and all lapped cars allowed to get their laps back before the restart with six laps remaining. Leclerc was able to take advantage of Verstappen’s steering problems to pull away, while the only driver to gain from the scramble as racing resumed was Tsunoda, who was able to get the better of Schumacher (who hadn’t pitted for fresh tyres) to sneak into the points.

At the end of lap 54, the final act in Verstappen’s Sunday drama came to a head: “What’s going on with the battery?!” he said over the team radio, to which he received a funereal response from the Red Bull pit wall: “It’s not the battery, there’s nothing we can do.” Seconds later the car lost drive and limped to pit lane with Verstappen’s hopes dashed; Perez was also on air declaring that he too was losing power; as Hamilton lined him up for a last lap pass and an unlikely podium, the Red Bull’s engine seized and sent Perez spinning out at turn 1. 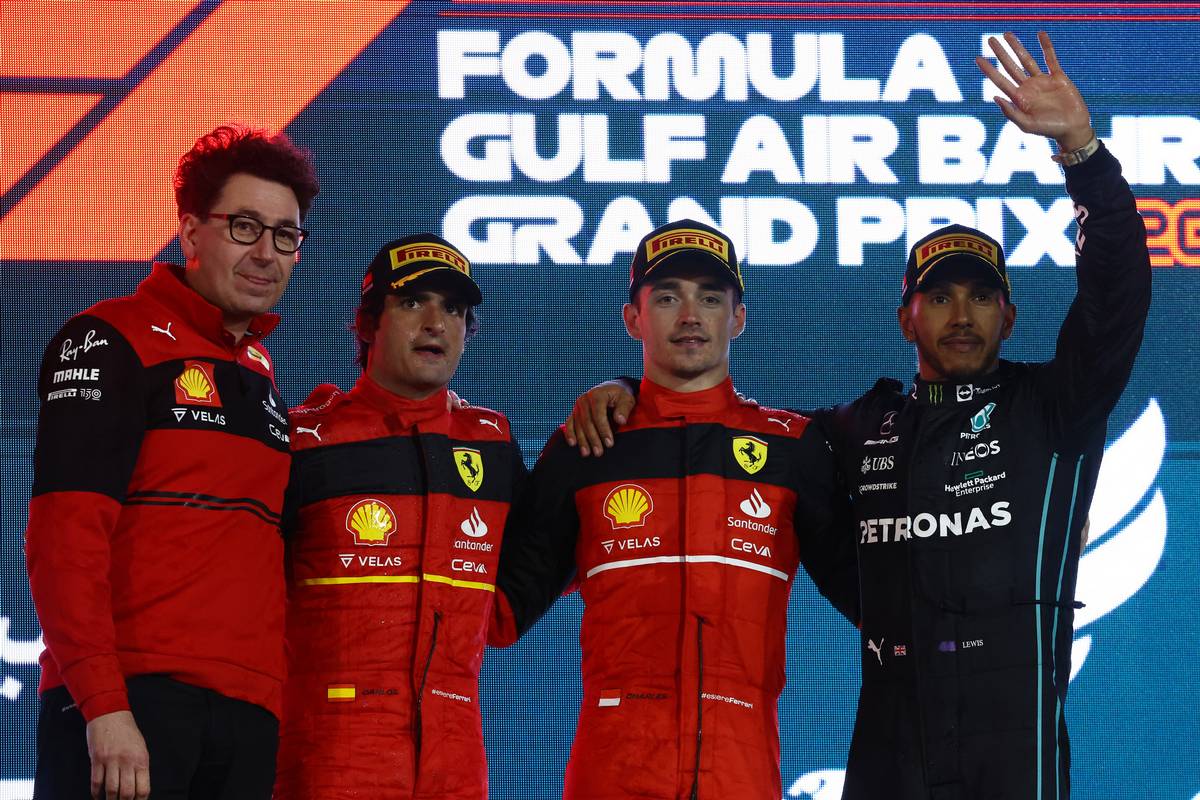 Jaws were still dropping at this spectacle as Leclerc crossed the line to claim victory with Sainz now in second to make it a Ferrari 1-2, and Hamilton having salvaged a truly unexpected podium and Russell right behind him in fourth. magnussen confirmed a new era for Haas in fifth followed by Bottas, Ocon, Tsunoda, Alonso and Zhou and Schumacher just missing out.

And if that’s the standard of racing for 2022, then it’s going to be one heck of a season!