Performing stunts of public roads is dangerous and we don not such activities. We have shown several videos and social media posts that show dangerous these acts can actually be. We have featured many of these on our website. Doing stunts on public road is an offence and cops can actually book the vehicle driver for rash and dangerous driving. Here we have a video that shows what all can go wrong while one is doing stunts on a road. In this video, vlogger attempts a stunt with an old generation Honda Civic which did not end well. What happened? Let’s check the video.

The video has been uploaded by Arun Panwar on his YouTube channel. In this video, vlogger is seen driving an old generation Honda Civic. One of his friend had recently bought this premium sedan. Vlogger, owner of the car and couple of other people were inside the car. Vlogger mentions that Honda Civic has aged well and even today, none of the plastic trims on the dashboard or the door panels make squeaking noise.

Before taking it to the main road, vlogger test 0-100 kmph time in the Honda Civic on a narrow road. According to the video, this old Honda Civic took almost 11 seconds to hit 100 kmph. Vlogger found Honda Civic quite engaging and was having fun with the car. Vlogger then took the car to a closed part of an express highway which is currently under construction. On this stretch he found a very clean stretch of tarmac and thought of doing some stunts with the car.

He thought of drifting the Honda Civic as this is a low slung sedan, it would manage to do it in a better manner than a crossover or an SUV. He handed over the camera to rear passenger and started accelerating. He ignored the dust and dried up mud on the surface which turned out to be the villain in this case. He was carrying good speed when he pulled the handbrake. The moment, he pulled the handbrake, rear wheels got locked and the car started to slide. 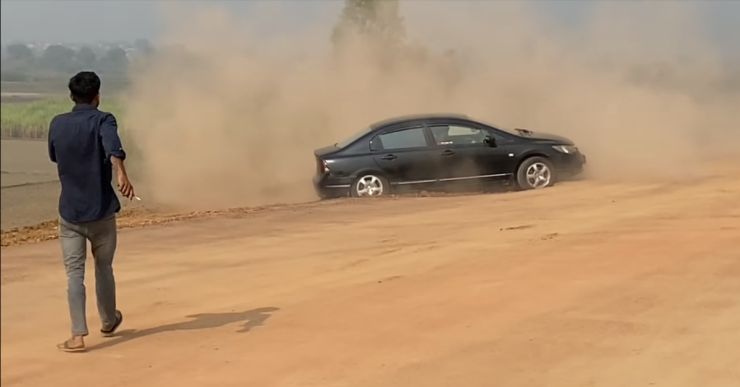 The car was so fast that the vlogger soon lost control on the car. It kept on sliding and spun and ended up outside the road. The rear wheels were stuck in the loose gravel on the shoulder of the road. This is what stopped the car. If the car had not stopped at that point, the car would have fallen down from a height. If that would have happened, the car would have been damaged and the occupants might have ended up with injuries. luckily, the vlogger and other occupants inside the car escaped without any problem. The car also came back on the road without any problem.

As there was dried up mud and dust on the road, the wheels did not get any grip and that is why it spun out. The speed of the car was also a reason. If the vlogger was doing similar stunt on an open road when the car went out of control, then the chances were very high that the car would have hit some other vehicle or a pedestrian. By doing so, the driver would have put his life and the life of other people at risk.