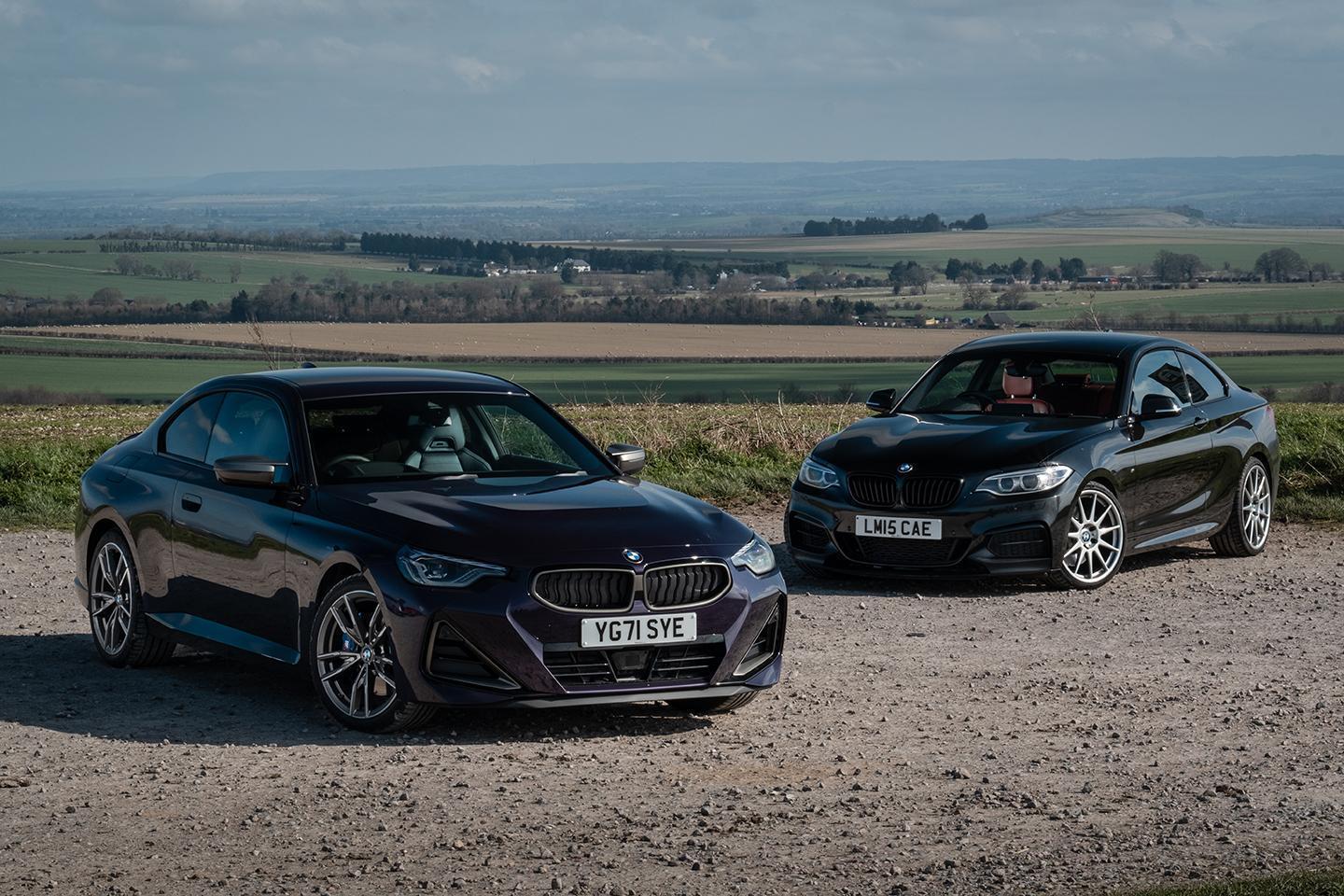 Allow us this one, please. Because while this test is skewed in just about every possible way for comparing a pair of BMW 2 Series – new versus used, standard versus modified, rear- versus four-wheel drive – it was impossible to resist pitching new M240i against old M235i. As far back as the 1 Series Coupes, the baby BMWs have always occupied their own space, even in a small coupe market so sparsely populated. The rear seats give them something over a Porsche Cayman, they’ve all been more interesting to drive than any version of the Audi TT, as well as being classier than a Nissan Z and faster than anything Toyota or Subaru managed. While at the same time getting customers into a straight-six BMW for less than a 3 or 4 Series. Comparing generations just made sense because there’s very little like the smallest two-door BMWs with 3.0-litre engines.

For all that BMW (rightly) gets stick for nowadays, its decision to base the latest G42 2 Series on the CLAR architecture also used for the 4 Series (rather than the UKL1 platform that underpins the 1 Series hatch and 2 Gran Coupe) deserves praise. Because doubtless it could have tweaked the underwhelming four-cylinder, xDrive 35i models in those ranges to get something approaching a coupe. But it hasn’t. Instead it has given us another relatively compact (we’ll come back to that point) two-door coupe with a big straight six up front. And even with standard-fit xDrive, the emphasis is very much on the rear axle.

Moreover, as you’ve hopefully seen already, BMW has done a great job out of the box with this M Performance 2 Series in a way it never quite managed with the old car. Despite carrying far more mass it manages the kilos better, even in the dampers’ standard Comfort mode, and Sport doesn’t make it unbearable either (as it can in an M3), instead delivering almost boundless control for wheel and (chunky) body. It deals with bumps, imperfections and direction changes an order of magnitude better than the old generation, making the driver far more confident over a typical British B-road in how it’s going to behave. 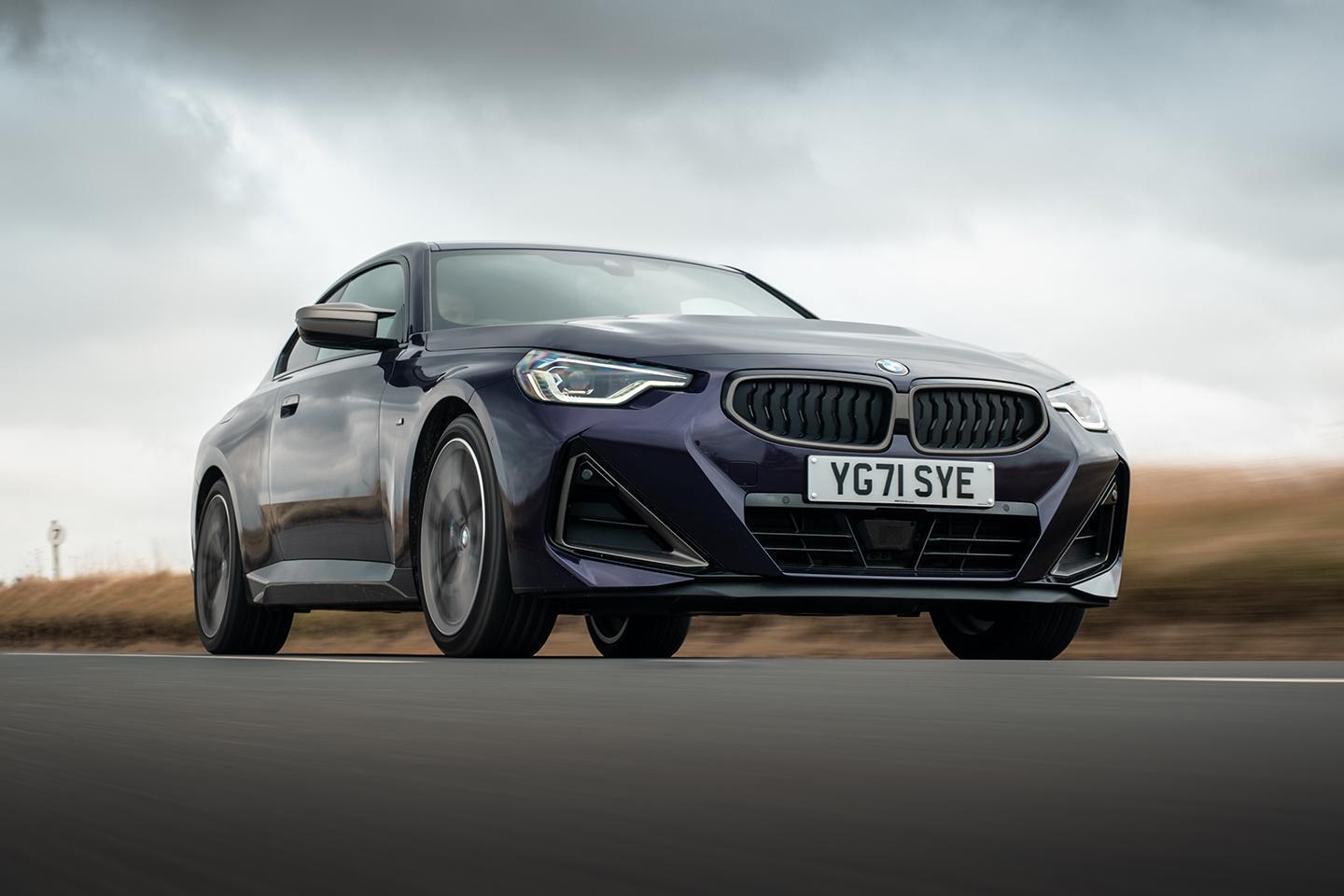 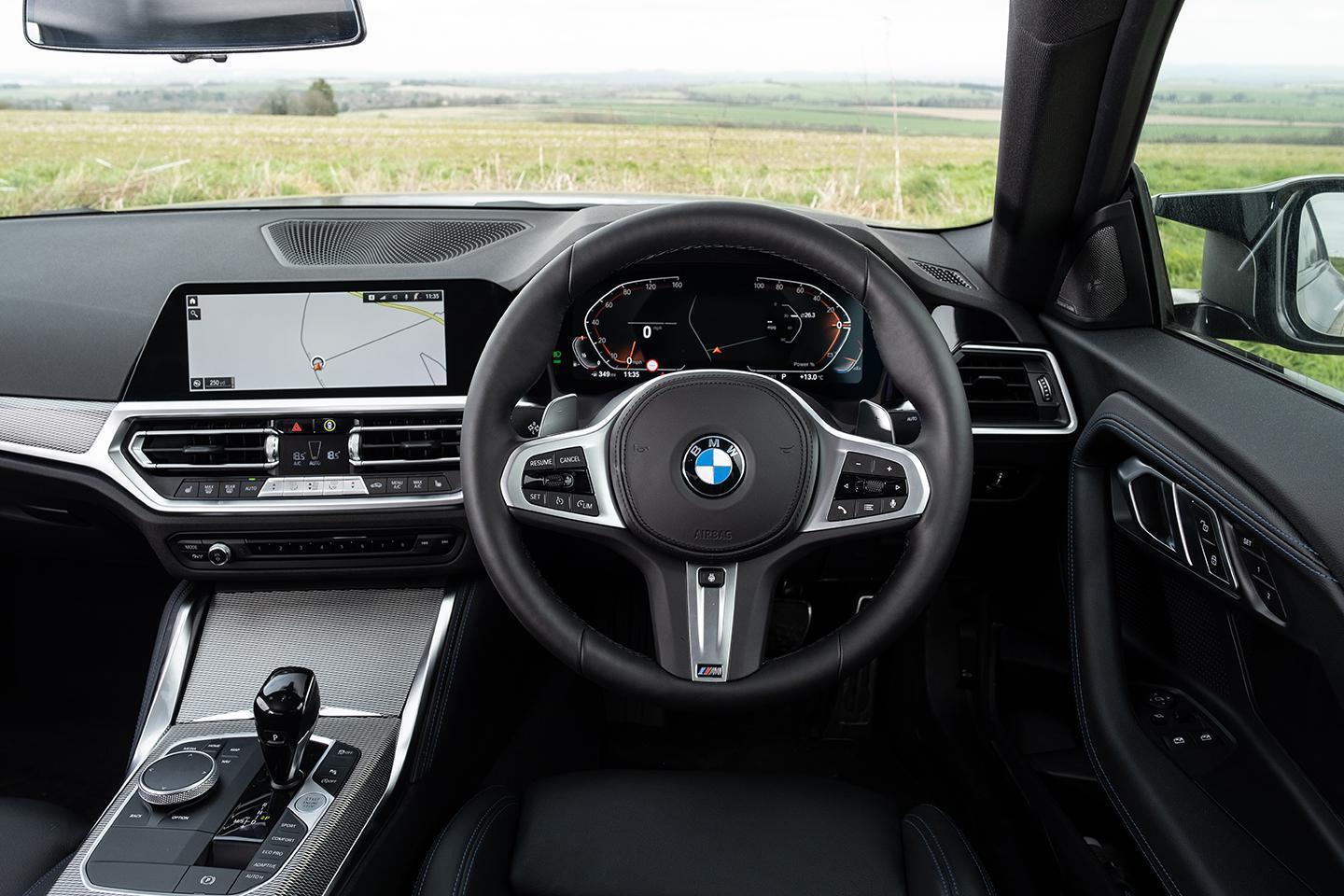 Which, as it turns out, is very smartly. The steering is more direct than the memory says an old 2 Series was, cutting out any mush and giving the 240i a willingness to turn that belies its kerbweight. The xDrive feels as smartly configured here as in other installations, feeling for all the world like a RWD BMW most of the time – it’s the back axle pushing you out of a bend, maybe just overspeeding a tad, never the front pulling the car around. The eight-speed Aisin auto is neat, too, stacking the ratios close and changing decisively. (The reluctance to change down I didn’t find, though that might be through relying on a higher gear and the torque more often).

Plus, of course, you’re being motored along by a smooth, responsive, powerful engine. The B58 perhaps isn’t a BMW icon but, quite frankly, having any kind of straight six in small car is welcome nowadays. And the driver is never in any doubt of that, even if the sound is a little too smooth for its own synthesised good on occasion.

So what’s the problem? Well, maybe ‘problem’ is too harsh a word, but the overriding impression of this M240i xDrive is of a factionally smaller, ever so slightly faster – most certainly uglier – M440i xDrive. No bad thing, you might say, as that means a BMW with a great interior, a fine engine, and accomplished handling. But the hope was that with the rest of the two-door range maturing – the M4 is now what an M6 would have been a few years ago – the 2 Series might offer something a little rowdier as the entry point to the lineup. Perhaps that’s a churlish criticism, feeling too much like a more expensive car – not least with an M2 still to come – though in being as well-appointed and refined as it is, the M240i does struggle for that impish sense of fun one might hope to discover in the smallest BMW two-door with almost 400hp. 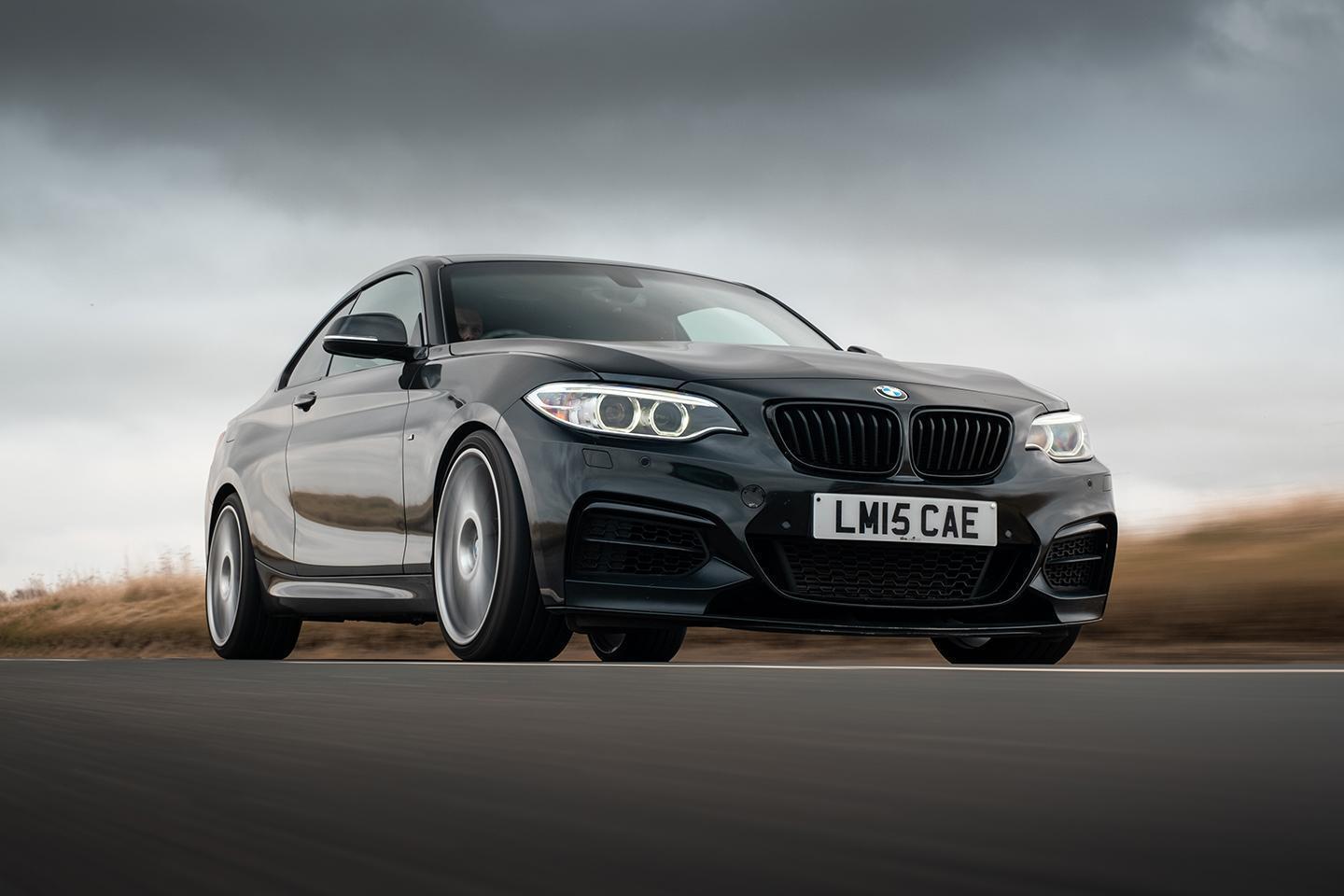 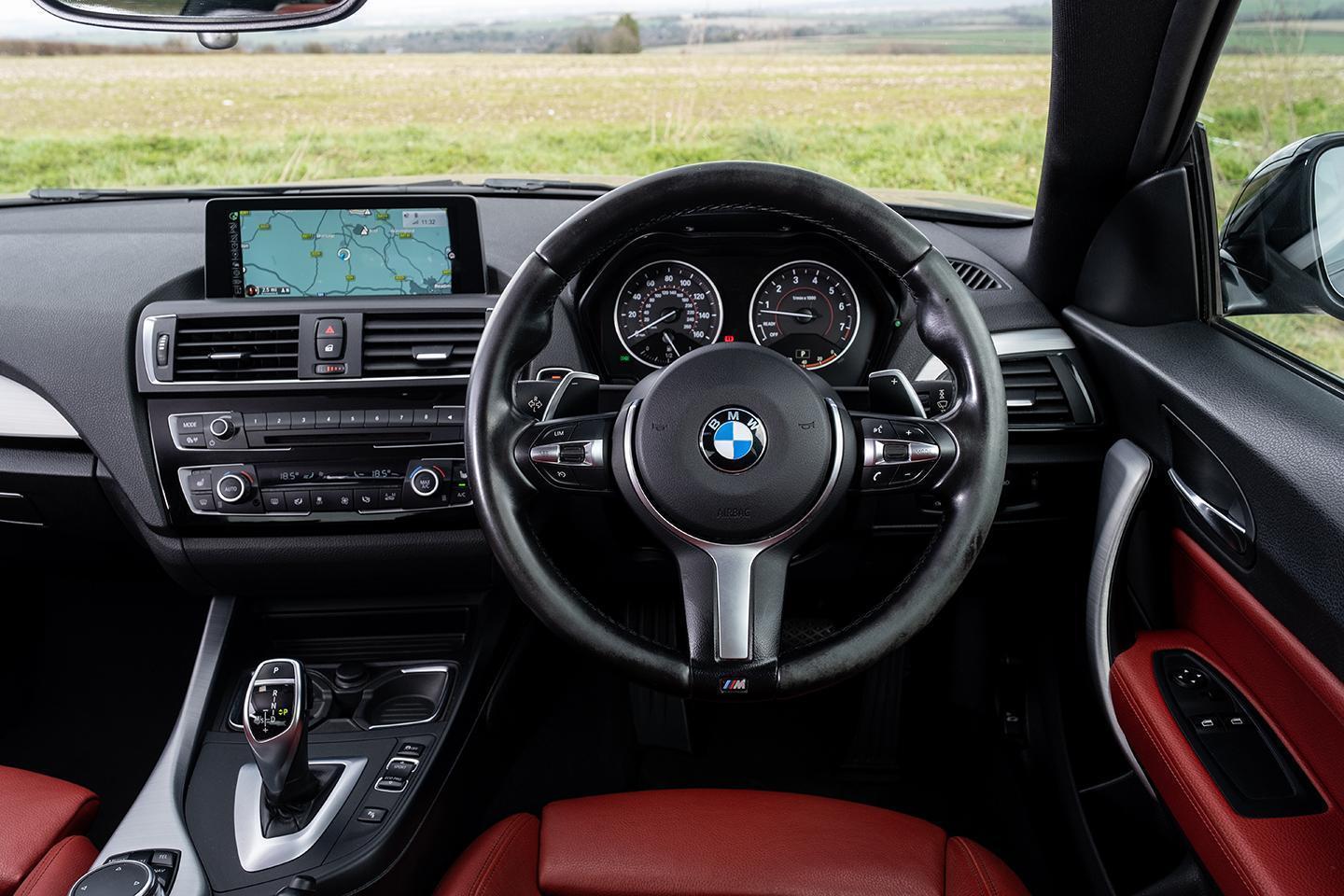 The weight most certainly counts against it, too, despite the sorted suspension. Where an M3 or M4 remains wildly exciting with xDrive, it has 510hp and 479lb ft to credit for that. An M240i, with ‘just’ the 374hp and 369lb ft – and only 85kg in its favour – inevitably never delivers quite the same thrill. Perhaps it doesn’t need to, as a mere M Performance car – but so adept is the chassis now (and so alarming the kerbweight) that xDrive almost feels surplus to requirements.

Because 380hp or so in a properly set up, two-wheel drive 2 Series is nothing to fear – it’s something to relish, as the Birds B2 380 makes abundantly clear, even far from the first flush of youth. This 2015 M235i is kitted out with near enough everything Birds sells for the F22-era 2 Series, and as such a full conversion will cost £5,439 excluding VAT. For that buyers get the Quaife limited-slip differential, the 380hp ECU upgrade and Birds’ bespoke tune of Bilstein dampers, paired with its own springs, with days lavished on the set up. The parts are also available individually: 380hp costs £1,100, the suspension £1,561 and the Quaife diff £1,998, all excluding VAT. As with similar work by BBR on MX-5s, it seems like a lot when there are early M235is available for little more than £15k, but with later M240is still on offer with delivery mileage for less than £35,000, the temptation for some optimisation is readily apparent. Especially given the residual strength of M2s, and the near-£50k asked for an M240i…

If you’ve read anything about Birds-tuned BMWs before, you’ll know what to expect from the B2 380 experience. If not, it’s best surmised as what these M Performance models really should have been from the get-go; more refined and less boisterous than a full-fat M car, yet with enough extra chassis sophistication to make the most of a sparkling powertrain. As an everyday fast car compromise, it remains a tough one to beat. 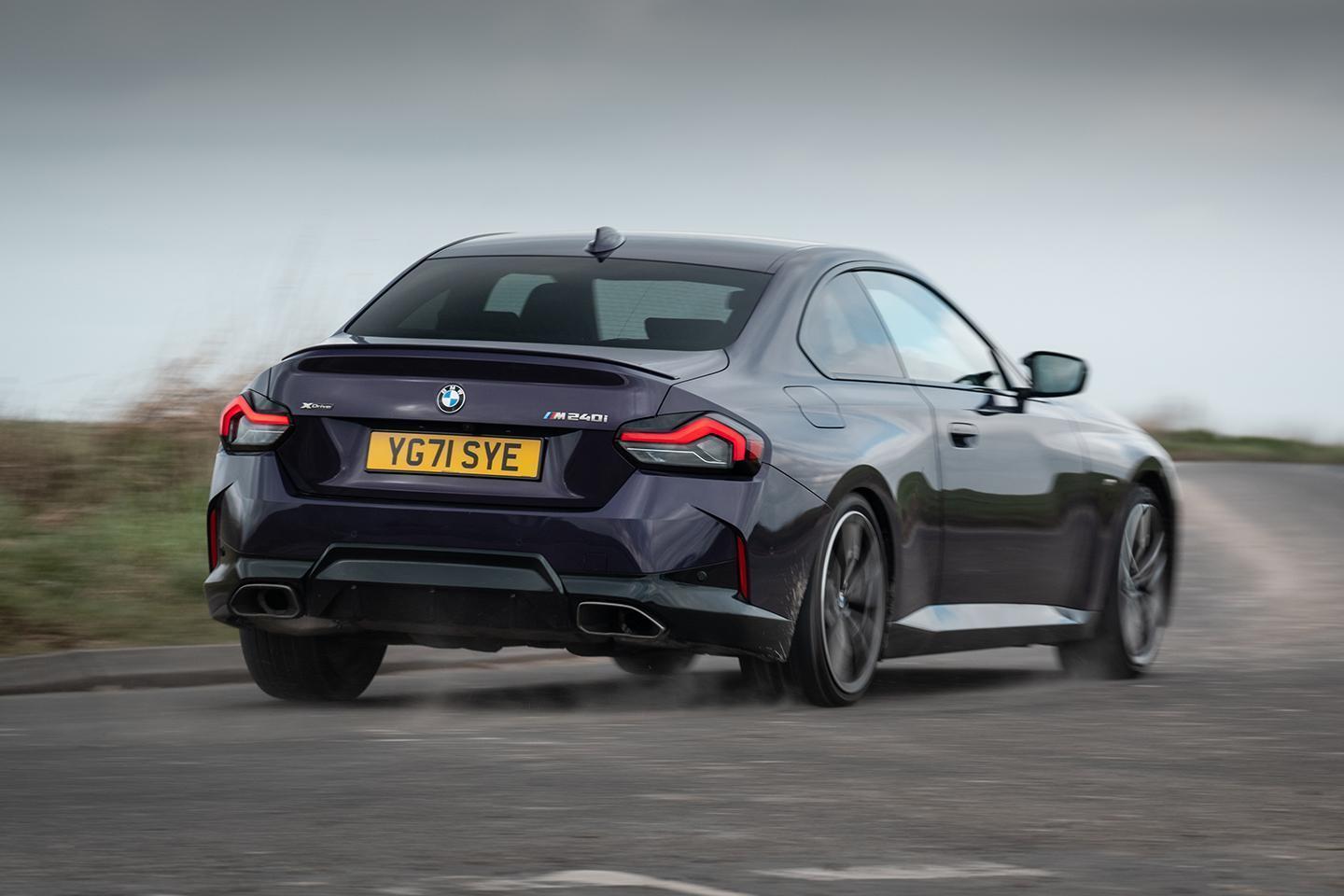 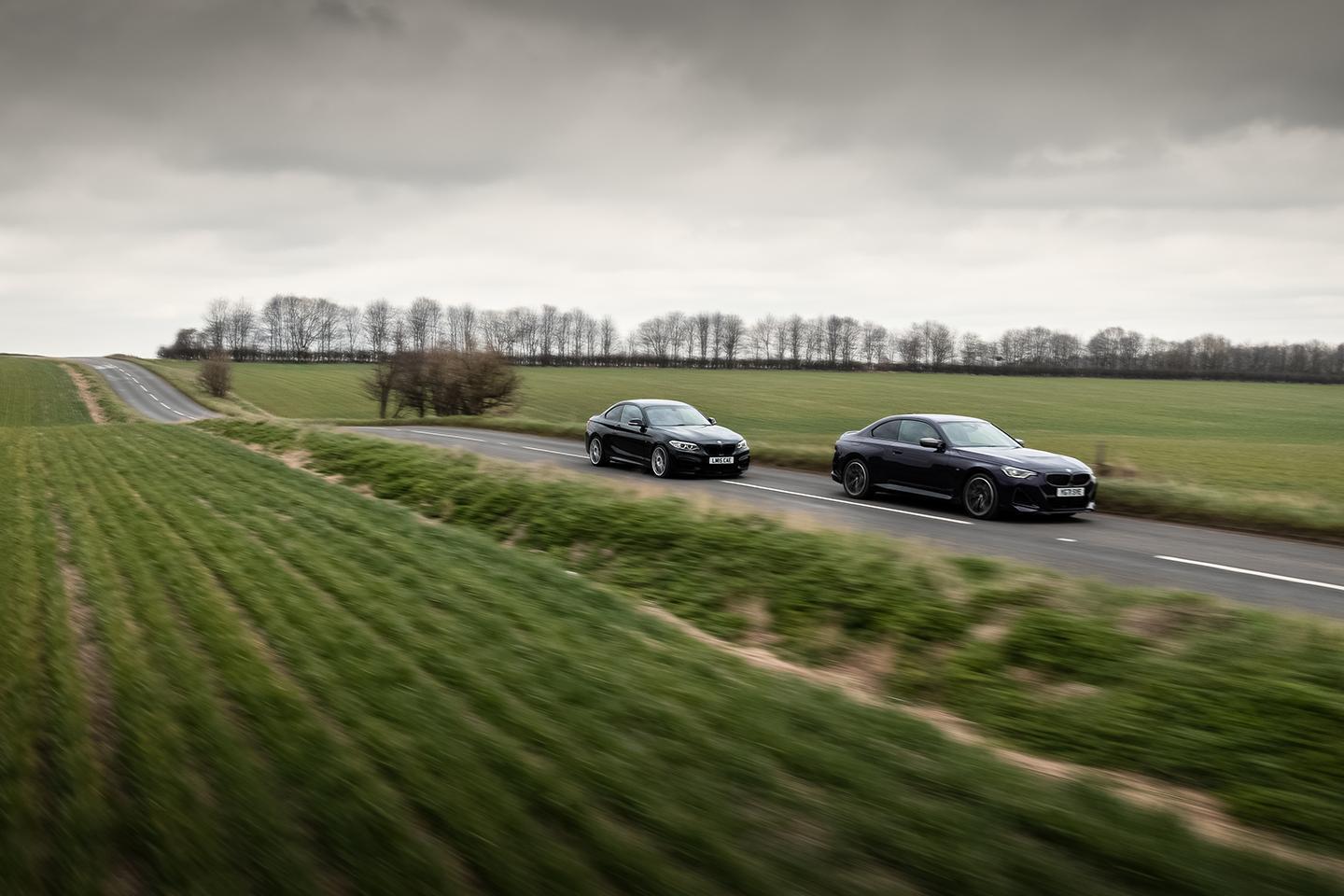 Even with sufficient miles to put another suspension refresh on the cards, plus Birds’ own forged 19-inch wheels (where 18s would probably offer a smarter compromise), the B2 immediately impresses with its taut pliancy. As standard, the 235i could do both crashy and floaty within yards of each other, and the Birds’ Bilsteins near enough eradicate that – without a mode or setting in sight, too.

The Quaife diff sits alongside the suspension as a must have for anyone thinking about modifying an M235i or M240i. Not merely because it allows big silly skids, but because it works with the chassis to better deploy the engine’s ample reserves. The inconsistency and unpredictability that can come with a powerful RWD car running an open diff is gone, replaced with much more transparent (and enjoyable) relationship between throttle pedal, steering wheel and rear axle. This is what baby BMWs should feel like, where the coupe experience is enhanced by rear-wheel drive and not overawed or undermined by it. For all its demonstrator miles, the Birds car remains more rewarding to drive than the original ever was when factory fresh.

The engine upgrade is nice to have, too, for feeling as fast as the new one as much as anything, but it’s far less essential than the dynamic fettling. Even so, it should be said that the new 2 Series is better resolved when pushed than the old car, with greater stability, control and composure, shrugging off the worst a road can throw at it just when the Birds car just starts to run out of ideas (and suspension travel). It really is that good. For all that its dumpy looks, it’s a far more complete coupe out of the gate than the previous generation. 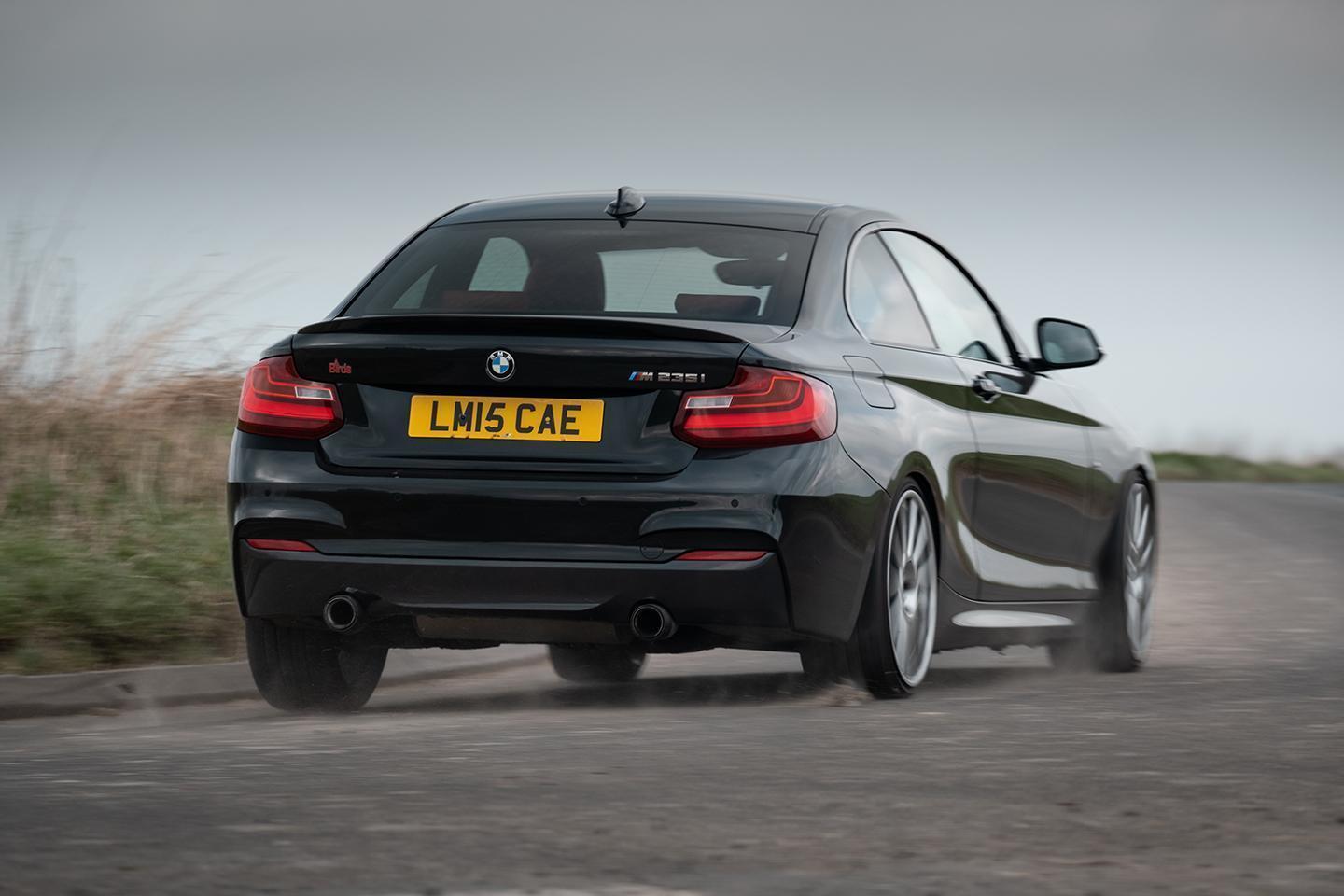 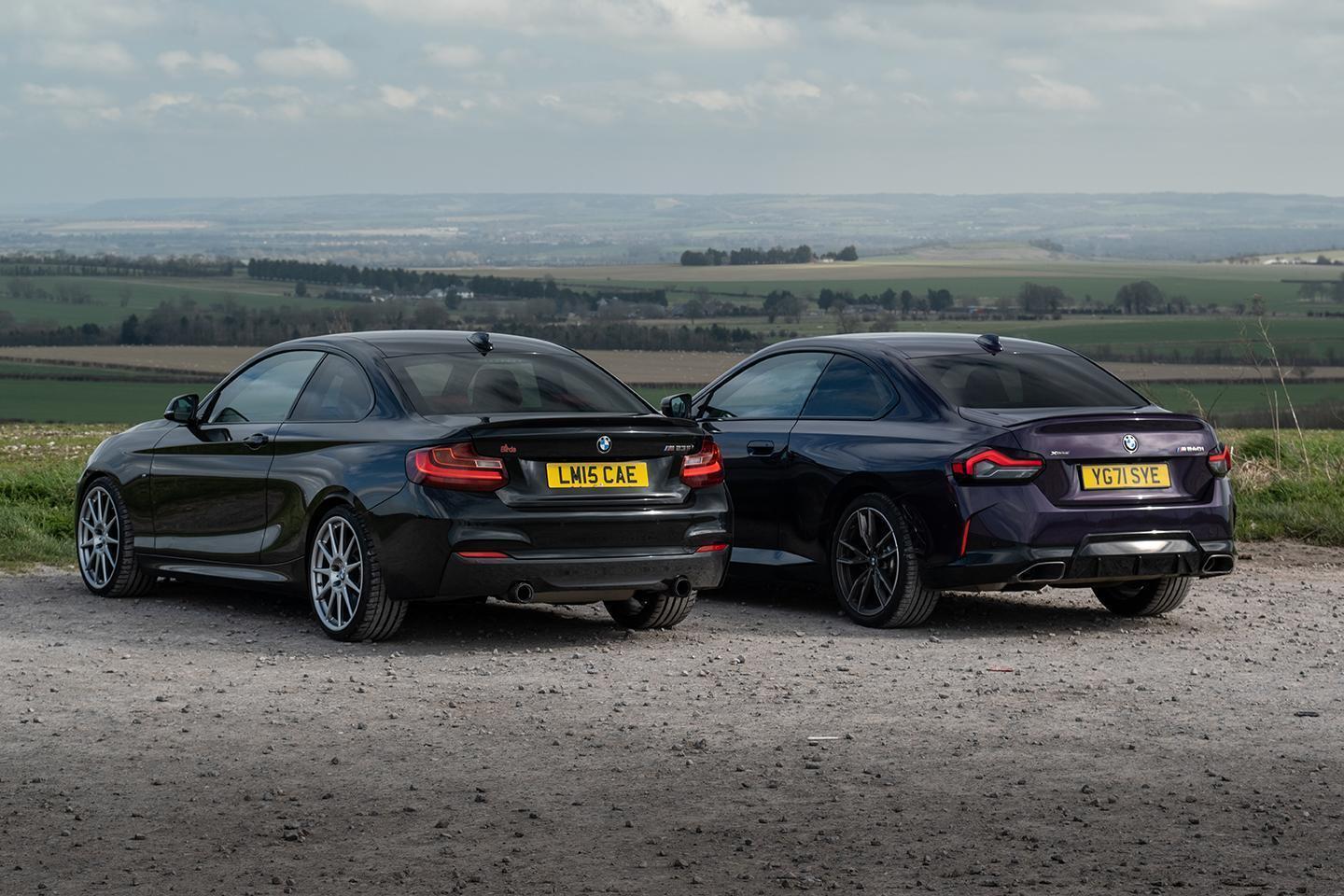 There can be little doubting, however, that the 2 Series has lost something of its rascally nature in growing up and settling down its unwanted body movements. It feels like a 4 Series because it is one, and now there isn’t another BMW coupe lower down the range we can look to for that old-school feel. Again, it’s hard not to come across old and cantankerous when presented with a new car that makes crucial gains over its predecessor, but a more muted six-cylinder sound, the lack of a manual option and unavoidable all-wheel drive are almost as notable as its unquestionable positives.

Hopefully Birds can work similar magic on this latest 2 Series. The old car is a reminder of what the company does so well, retaining the OEM feel while addressing the known issues with real finesse. Those craving the traditional BMW feel – a rasping straight six and sorted rear-drive chassis – alongside modern amenities ought to love a Birds BMW. Especially when it looks this smart. Even in 2022, you can get a one-owner, sub-30k M235i and add the Dynamics Package (so just standard power) for less than £25,000. On this experience, it’d be really hard to justify spending another £5k on an M2 with more than twice the miles, because Birds closes the gap so well. Now there’s a better 2 Series to start with, there’s good reason to hope more will come of it soon, because raw potential is in such ample supply. At the very least, the new M2 ought to be something really special.