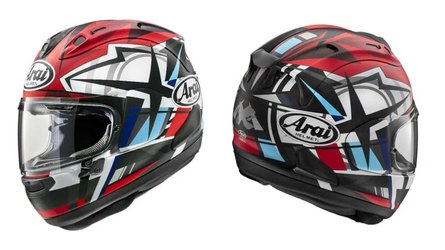 Sure, helmets are all about safety. However, you can’t deny that style plays a major role, too. As is the case with all things in life, the type of helmet you wear—if you wear one at all—boils down to personal preference. Personally, I’m a big fan of sportbike and race helmets. In fact, all the helmets I’ve ever owned were either full on race lids or standard full-face helmets, apart from the jet helmet I use on my Vespa.

Out of all the helmet manufacturers out there, few are as respected as Arai. The Japanese helmet maker is one of the oldest and well-known in the business, and is instantly recognizable to motorcyclists in all corners of the globe. When it comes to race helmets, Arai’s RX-7X has been one of the most popular. It first entered the sportbike scene in 2015, as Arai’s top-tier racing full-face helmet. For more than seven years, the RX-7X has protected the noggins of both pros and novices, street and track riders alike. It has gained an iconic silhouette, making it instantly recognizable among fans of the brand.

Over the years, the Arai RX-7X has been sold in a multitude of different colorways, as well as in replicas of some of the world’s most famous racers. Replica helmets of the likes of Dani Pedrosa and Maverick Vinales have been made available. This time around, Arai is set to release yet another race replica livery from Japanese racer Takumi Takahashi. Takahashi has had a brilliant racing career in Japan, and is currently racing in the world stage.

He previously won the Suzuka 8 Hours three times, as well as the JSB1000 series championship in 2017. On top of that, he participated in the Superbike World Championship in 2020, and is currently in British Superbike (BSB) alongside Honda. Arai’s newest livery for the RX-7X allows fans of the Japanese rider to sport his colors be it on the street or the track. RX-7X TAKUMI, as it’s being referred to, features Takahashi’s signature cross star and blue, red, and white colors similar to his race bike, the Honda CBR1000RR-R.

The Arai RX-7X TAKUMI is expected to hit stores in May, 2022. It’ll fetch a retail price of 69,300 Yen, amounting to the equivalent of around $537 USD in Japan. Do note that prices may vary depending on where in the world you’re from.