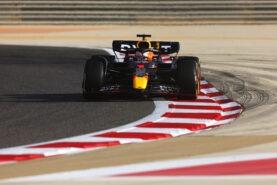 The third and final practice for the 2022 Bahrain F1 GP was kicked-off by rookie Alfa Romeo driver Guanyu Zhou. His first lap time was a 1:38.886 min in almost perfect weather circumstances

After 20 minutes only ten drivers had put a lap time on the timesheet. Ferrari driver Charles Leclerc was topping the leaderboard with a 1:33.797 min and had driven only 4 laps up till then. Red Bull Racing driver Sergio Perez was second on +0.363s and the other Ferrari driver Carlos Sainz was on P3 +0.420s behind.

That was until Max Verstappen drove his first run with light fuel and softs, like the other drivers in the top 5. The Dutch driver’s very first outing was an amazing 0.762s faster than Leclerc’s time. The Monegasque driver wanted to close down the gap and took a bit more risk the next lap. That lap he lost control in turn 11 again just like yesterday and spun off and was catched by the gravel pit so he didn’t crash into barrier. He was able to free himself from the gravel pit undamaged and continue practice.

Japanese driver Yuki Tsunoda seemed to have a hydraulic problem and had to return to his pit box for much needed repairs. The AlphaTauri driver didn’t come out any more and had not set a lap time.

With 20 minutes to go Lewis Hamilton tried a quick lap again with the Mercedes. The car looked to be a lot more stable than yesterday and the seven times champ managed to close the gap towards his rival Verstappen to only +0.086s. Both drivers were now 0.7s in front of the rest of the field.

A few moments later Sainz also came much closer to be second quickest, 0.1s behind Verstappen. George Russell showed he can play with the big boys now in the Mercedes and even went 0.1s faster than Verstappen and set the fastest lap time for a while.

With 10 minutes to go Leclerc and Verstappen improved again and beat the top times up till then by almost 0.4 sec. Verstappen now was back on P1 with a 1:32.544. min and Leclerc was right behind him on only +0.096s.

1:30,577 min was the fastest lap time of last years FP3 in Bahrain and was also clocked by Max Verstappen in the Red Bull.