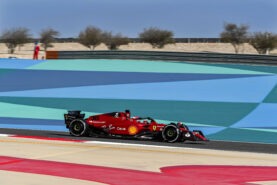 The second practice session for this year’s first grand prix in Bahrain started already under floodlights as the sun had set in the desert. Most cars used the medium tyre compound in their first run of this FP2.

It took 14 minutes before all drivers had come out off the pits to set a lap time on the leaderboard. Both Red Bull Racing drivers were the last two, with Perez being the last one. Until both Red Bulls had set a lap time Charles Leclerc was on P1 with a 1:33.121. Max Verstappen did drive the quickest time in the first sector of his first quick lap, but seemed to hold in to not beat Leclerc’s time right away. Perez made huge error in turn 8 in his first outing, which compromised his first quick lap.

Halfway this FP2 the lap times were going down quickly as the cars got fitted with the soft tyres. With 30 minutes to go the leaderboard show the following ranking  1. Leclerc (1:32.263), 2. Alonso (+0.614s), 3. Bottas (+0.688s). Verstappen had not clocked his lap time on the softs uptil then. Two minutes later the Dutch driver clocked the first sub 1:32 min lap of the weekend and clocked a 1:31.936 min and topped the timesheet.

With ten minutes to go Verstappen still was on top, followed by both Ferrari drivers with Leclerc only on +0.087s from P1. Sainz was +0.6s behind Verstappen on P3. George Russell was right behind on P4 in the Mercedes and Alonso was 5th on +0.941s. Lewis Hamilton was on P9 and over 1.2 sec. behind from the top spot.

1:30,847 min was the fastest lap time of last years FP2 in Bahrain and was clocked by Max Verstappen in the Red Bull.