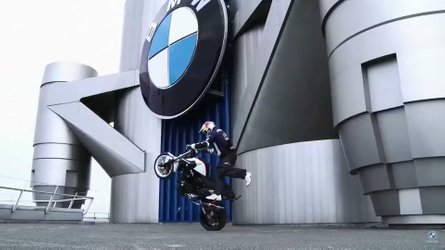 Inimitably talented motorcycle stunt rider Chris Pfeiffer has died by suicide at the age of 51, after a lengthy battle with depression. Family, friends, and fans around the world grieve his loss, with some posting moving tributes and memories of Chris’ memorable talent and personality on social media.

Pfeiffer started out doing motorcycle trials, and it wasn’t long before the talented young rider from Schongau, Germany scooped up a German Junior Championship title at the age of 15. From there, he only went on to rack up more awards, eventually setting his sights (and his training) on hard enduro.

It’s impressive enough to win an Erzbergrodeo once, but Pfeiffer won it four times—in 1996, 1997, 2000, and 2004. In Erzberg history, only two other riders have won more (five events apiece): Taddy Blazusiak and Graham Jarvis, both of whom came after Pfeiffer.

After seemingly mastering enduro, Pfeiffer moved on to new challenges—and that’s when he became a professional motorcycle stunt rider. He performed shows worldwide, in at least 94 countries—and was with the BMW Motorrad team for a decade.

By all accounts, his was a friendly, welcoming, enthusiastic personality—and it was clear that he loved what he did, and also that he loved his fans. The fans loved him right back, with frequent stories of multiple thousands of fans instantly getting excited around the world as soon as his stunt bike was wheeled out of the transport truck at shows.

Still, by 2015, it was time to move on. Pfeiffer announced at that time that he was retiring from professional riding life in order to spend more time with his family. At the time, he was 45 years old—and as even the fittest riders can tell you, having the kind of career that Pfeiffer had built up to that point definitely takes a toll on a rider’s body.

Pfeiffer is survived by his wife, Renate, as well as their children. A memorial service is planned in Trauchgau, Germany on March 26, 2022 at 9:30 a.m. According to Speedweek, all who wish to remember Pfeiffer are welcome to attend.

We at RideApart extend our condolences to the family, friends, and fellow fans around the world who are keenly feeling this loss. Depression and mental health are ongoing, important concerns that don’t have easy fixes. During bad periods, they can be a daily struggle. More mental health initiatives have been springing up in various motorcycling communities around the world in recent years, which is great to see. The less stigma there is around talking about something that’s a fact of life for everyone, the better.

If you or someone you know is struggling, there is help, and hope—and these aren’t just empty words written by some random person on the Internet. There are a number of different mental health referral services and hotlines available in different areas. Here are some in the U.S.: