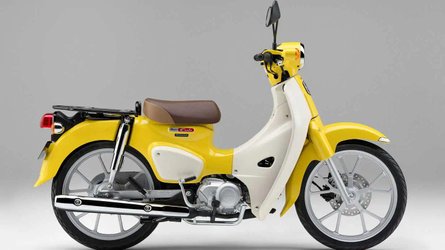 The 38th annual Osaka Motorcycle Show officially kicks off on March 19, 2022, and Honda is busy pulling out all the stops with its new model introduction plans. It’s bringing a veritable stack of new newness to the show, to be followed in short succession by appearances at the 49th Tokyo Motorcycle Show and the 1st Nagoya Motorcycle Show. No worries if you’re not anywhere near any of those cities, either—Honda will also be posting information about all the new models in its Virtual Exhibition Hall, for those of us who are otherwise occupied.

Ahead of its worldwide launch, Honda Europe officially released all the detailed information we could possibly want about the 2023 Honda ST125 Dax—which is one of two models that’s getting its world premiere at the 2022 Osaka Motorcycle Show. It hasn’t gone to quite those same lengths with the newly updated Super Cub 110, but we do have one clear image and a few key details ahead of the official launch.

As you can see, it looks like a Super Cub, in a friendly, sunny yellow-and-cream color scheme, with a brown saddle, black rear rack, and matte alloy wheels. The styling is clean, simple, classic, and reassuring, which is one of the reasons the world fell in love with the Cub in the first place.

While Honda has so far not given specific details about the updated Super Cub 110, it’s apparently getting a new engine which Honda says will improve both efficiency and peak torque. A disc front brake will now come standard, as will ABS. Both wheels are now cast alloy affairs, and come outfitted with tubeless tires.

The meter will now have a clock display, so fortunately or unfortunately, you can know what time it is while you ride. (Side note: I don’t have any Super Cubs just now, but I do have two other Hondas that don’t have clocks, and I like not seeing a clock when I’m out riding. Your feelings may vary, however.) The updated Super Cub 110 will also have a new gear position display indicator, so no more guessing should be necessary, in theory.

The previous version of the Super Cub 110 featured an air-cooled, single overhead cam, 109cc single-cylinder engine that made a claimed 7.9 horsepower and 6.3 pound-feet of torque. It also had a four-speed gearbox. How will the updated version alter these figures? Thankfully, we only have a day to wait to find out as I type this.