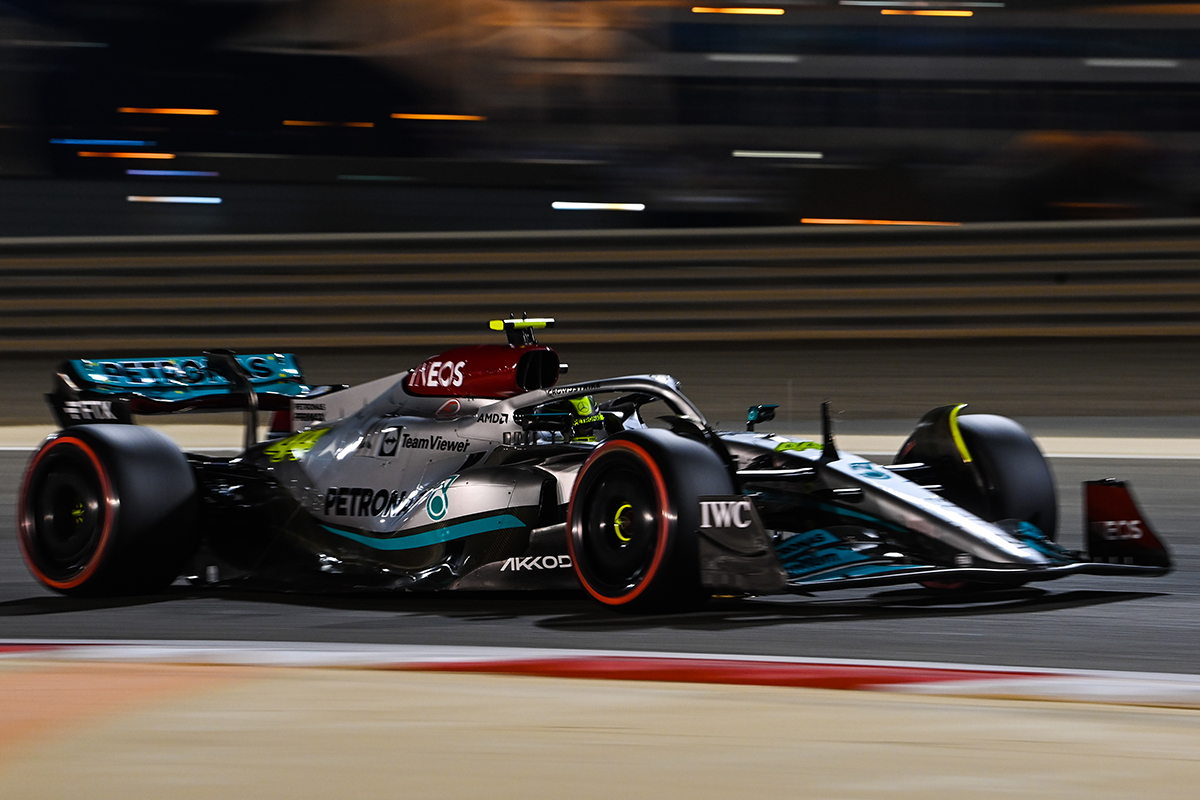 Fifth place on the grid for the Formula 1 Bahrain Grand Prix has left Lewis Hamilton feeling positive after qualifying.

With Mercedes struggling to get on top of porpoising issues with the W13, the seven-time world champion began downplaying his team’s chances during pre-season testing.

Those comments were dismissed at the time as posturing by the team but have proven to be a fair representation of the squad’s pace after qualifying.

It’s left Hamilton happy to be starting fifth after small gains over the course of practice in Bahrain saw him move closer to the likes of Charles Leclerc and Max Verstappen at the head of the field.

“On one side, I’m generally feeling really positive about the day,” Hamilton said after qualifying.

“There’s been a crazy amount of work and conversations here till late, working on trying to just extract everything, amongst the fact that we still have the fundamental issues, and no set-up change is necessarily going to fix those in the short term.

“The guys ahead are a lot quicker; I mean six, seven tenths. A lot of time,” he added.

“But I do know there’s potential and I think we’ve just got to work very, very fast, and be precise over these next weeks to try and close that gap as soon as we can.”

The problems Mercedes is seeing are not track dependent, Hamilton added.

While the surface in Bahrain is bumpier than that seen in pre-season testing in Barcelona, the porpoising the W13 is suffering from has been a feature at both locations.

“We still had the problem in Barcelona, which is not as bumpy as here.

“This is a bumpy track and we have these longer straights, so we anticipate in the next race, for example, they have much longer straights there, we would have the same issue unless we fix it.

“There’s a huge amount of people in the background that are working, incredibly intelligent [people], working around the clock trying to come up with the right solutions.”

Without the pace of Red Bull and Ferrari, Hamilton is now looking to leave Bahrain with whatever he can as he kick starts his 2022 season.

“Now we put the focus on to try and figure out how we can maximise tomorrow,” he reasoned.

“The goal is obviously to finish the race, maximising the points.

“Realistically, we can’t really compete pace wise to the guys that are ahead of us, but we can fight the guys behind.

“However, we might have slightly different strategy in terms of if you look at the tyre situation – who knows whether that can come into play tomorrow if our pace happens to be a little bit better than we anticipate.

“This won’t necessarily be the case, but everyday is different,” he added.

“We can maybe just hold on to the guys ahead just for a little while and give them a little bit of trouble, but we definitely won’t be quicker than any of the guys in front of us.”

Alongside Hamilton on the third row is Valtteri Bottas, now driving for Alfa Romeo Sauber, while George Russell will start ninth in the second Mercedes.

The Bahrain Grand Prix begins at 02:00 AEDT on Monday morning.