The 2022 Formula 1 season is set to start on Sunday, March 20th, with the 2022 Bahrain Grand Prix. The event might even be more interesting than some other recent season-openers, given the total revamp of technical rules and the highly different cars that we’ve been seeing on track during testing. For this round of the World Championship, there could certainly be some surprising results and that could give you a great chance to plunge and bet on the 2022 F1 Bahrain Grand Prix. If you’re in the US, wetten.com/us/ is a great option to find your ideal gambling sites.

As always, pecking order talk is what drives most of the attraction the season-opening Grand Prix generates. The unofficial and official days of testing, at Barcelona and Bahrain respectively, gave us many situations that could dictate a bit of what could happen in the first race.

Although teams were locked in in terms of trying to deflect the ‘responsibility’ of having the strongest car so far, many on the paddock agreed that Red Bull and Ferrari looked like the best on the track. It includes Mercedes and its camp, with both Lewis Hamilton and George Russell suggesting that the German team might not be on the best form at the moment, or at least not at Red Bull’s and Ferrari’s level.

Red Bull’s Max Verstappen and Ferrari’s Carlos Sainz dismissed Mercedes’ concerns about their W13, but Q3 on Saturday’s qualifying session will be the moment where the truth will come out as to what could we expect in terms of competitiveness in the first part of the year.

Mercedes did not look impressive in terms of pace, although the car did look extraordinary with a design that really doesn’t include sidepods, which is highly different from other concepts, especially Ferrari’s. 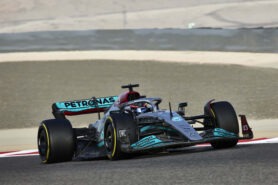 Mercedes managed to lap more than everyone else, with a total of 385 laps but was only fifth in terms of lap time (which isn’t always indicative of performance at this stage). Red Bull, on the other end, had the fastest lap of the Bahrain pre-season test, with Max Verstappen putting up a 1:31.720 on the softest tyre (C5).

Red Bull wasn’t on the top half in terms of laps completed, but managed to still impress others on track with its RB18. Ferrari, on its side, was consistent in terms of reaching its goals in testing due to reliability, and finished third in terms of lap time (Charles Leclerc had a 1:32.415.

For what is worth, Ferrari was the only team to finish in the Top 3 in terms of laps completed and lap time in pre-season testing, and their F1-75 car impressive look might certainly be backed by great performance in 2022.

Behind the three biggest teams, we find that McLaren struggled a bit with brake issues, while also completing the fewest amount of laps (200) and also missing Daniel Ricciardo due to a positive Covid-19 test.

Alpine had a balanced test, with both Fernando Alonso and Esteban Ocon managing to produce several laps for the car (299 – seventh-most) and Alonso finishing fourth overall in terms of lap time. AlphaTauri didn’t look quite fast, but anything could change in the upcoming events, what was important for the team and its drivers (Pierre Gasly and Yuki Tsunoda) is that it managed to do a lot of laps (371, only behind Mercedes) to prepare the AT03 for the upcoming campaign. 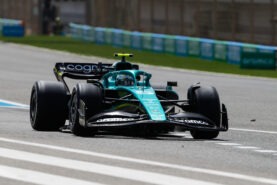 Although they were only ninth in official lap time, Aston Martin looks to have a great base to work on throughout the year and look towards big results in 2022. Both Sebastian Vettel and Lance Stroll helped the team complete the fifth-most laps in testing (339) and look ready for the weekend.

Williams and their drivers, Nicholas Latifi and Alex Albon ran into some reliability issues with the FW44. The team was eighth in terms of laps completed and last in terms of lap time, but the improvement seen last year could definitely make us believe that Williams might develop its new challenger nicely throughout the year and contend for points with a certain consistency.

Last year’s backmarkers, Alfa Romeo and Haas, found some nice things during pre-season testing that could be encouraging. For Haas, Mick Schumacher closing out pre-season test with the second-fastest lap on the C4 tyre was great for the team, while Alfa Romeo’s new line-up of drivers (Valtteri Bottas and Guanyu Zhou) managed to produce the fourth-most laps during the testing period.

The first Bahrain Grand Prix in Formula 1 history came in 2004, with Michael Schumacher winning the race for Ferrari. The Bahrain round will host the season-opener of a Formula 1 season for the fourth time, after hosting the first race of the 2006, 2010 and 2021 seasons. 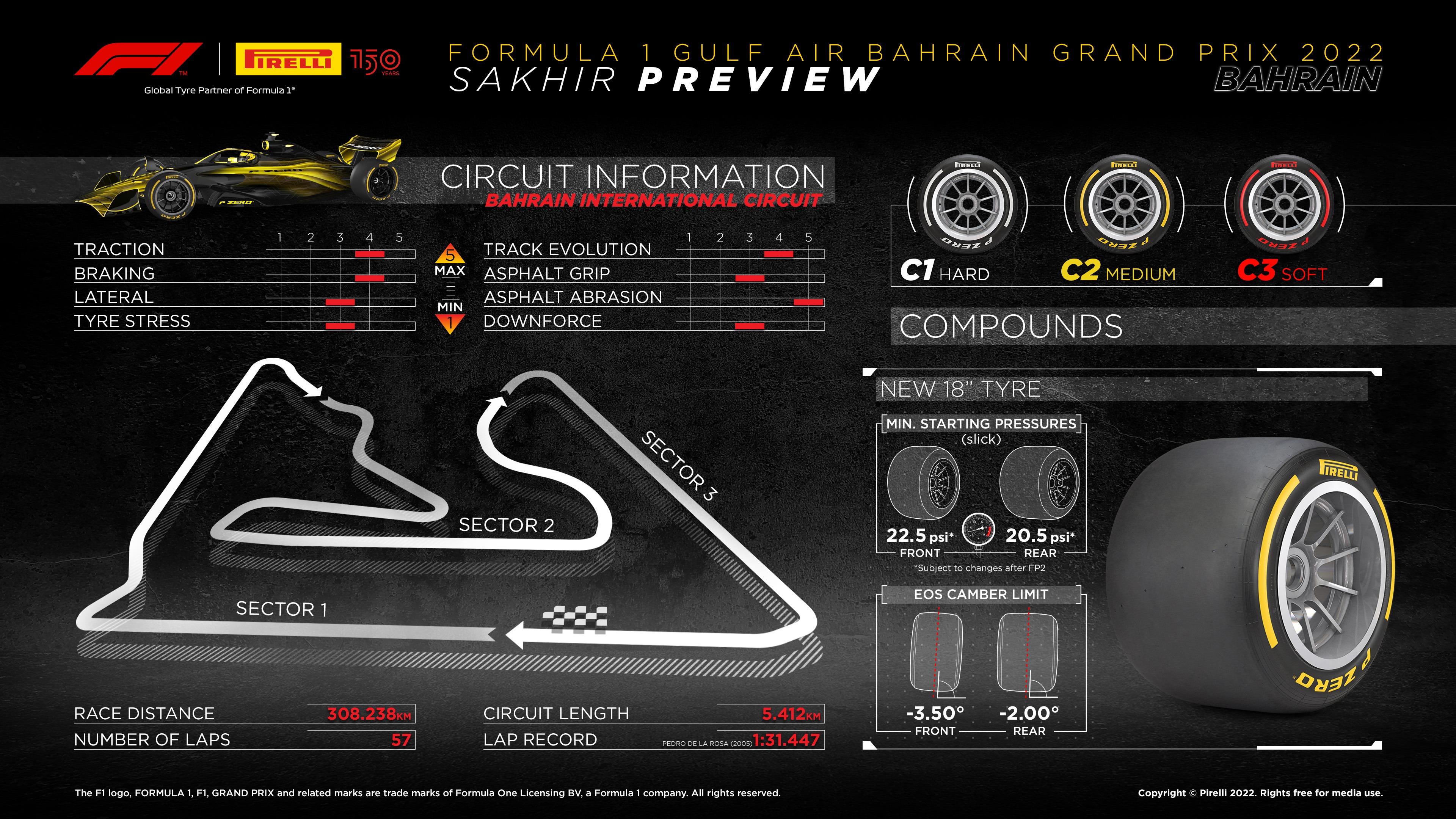 Fernando Alonso followed Schumacher’s win in 2004 with two straight triumphs in 2005 and 2006 for Renault. Then, Ferrari returned to victory at Bahrain, with Felipe Massa taking consecutive wins in 2007 and 2008.

Jenson Button won for Brawn GP in 2009, while Alonso won in his Ferrari debut in 2010, in the Endurance layout of the circuit. The 2011 race was cancelled due to social issues, before Vettel and Red Bull took wins in 2012 and 2013.

Hamilton won in Bahrain in 2014 after a stunning fight with his then Mercedes teammate Nico Rosberg. Hamilton won again in 2015, while Rosberg succeeded in 2016.

Vettel won for Ferrari in 2017 and 2018 before Hamilton and Mercedes struck back with three consecutive wins from 2019 to 2021.

In the 2020 race, Haas’ former driver, Romain Grosjean, had a miraculous escape after a crash in the first lap of the race that luckily ended with the Frenchman suffering only burns in his hands and not something worse.

The Bahrain International Circuit is a facility with six different layouts. Four of those have received Grade One recognition by the FIA. Since 2004, 16 races have taken place in the Grand Prix layout, and the 2010 event was held in the Endurance, 6.299 km layout.

The Grand Prix layout has 15 corners and is 5.412-km long. The track will have three DRS zones. The zones will be in the main straight, the straight that unites turns three and four, and the back straight between turns 10 and 11.

The track has given us some exciting races in the past and last year’s DRS zones allowed defending drivers to enter corners mostly alongside the DRS-powered cars, which is a perfect situation for close, wheel-to-wheel racing. The end of the race was decided when Max Verstappen tried to put his Red Bull around the outside of Turn 4 to overtake Mercedes’ Lewis Hamilton, but went off the track and had to give the position back.

As Verstappen was on better tyres, he already had an advantage, and the DRS was still effective to produce good wheel-to-wheel racing and not to create a straightforward overtake.

The fastest lap around the Bahrain International Circuit was 1:31.447 min in the 2005 race, by Pedro de la Rosa in the McLaren MP4-20, while the fastest lap in any session took place in the 2020 qualifying session, when Hamilton did a 1:27.264 min lap

The dry tyres for the 57 laps of the 2022 Bahrain Grand Prix will be the C1 as P Zero White hard, C2 as P Zero Yellow Medium, and C3 as P Zero Red soft. This is the hardest choice of tyres for 2022, with the new 18-inch compounds making their F1 debut. 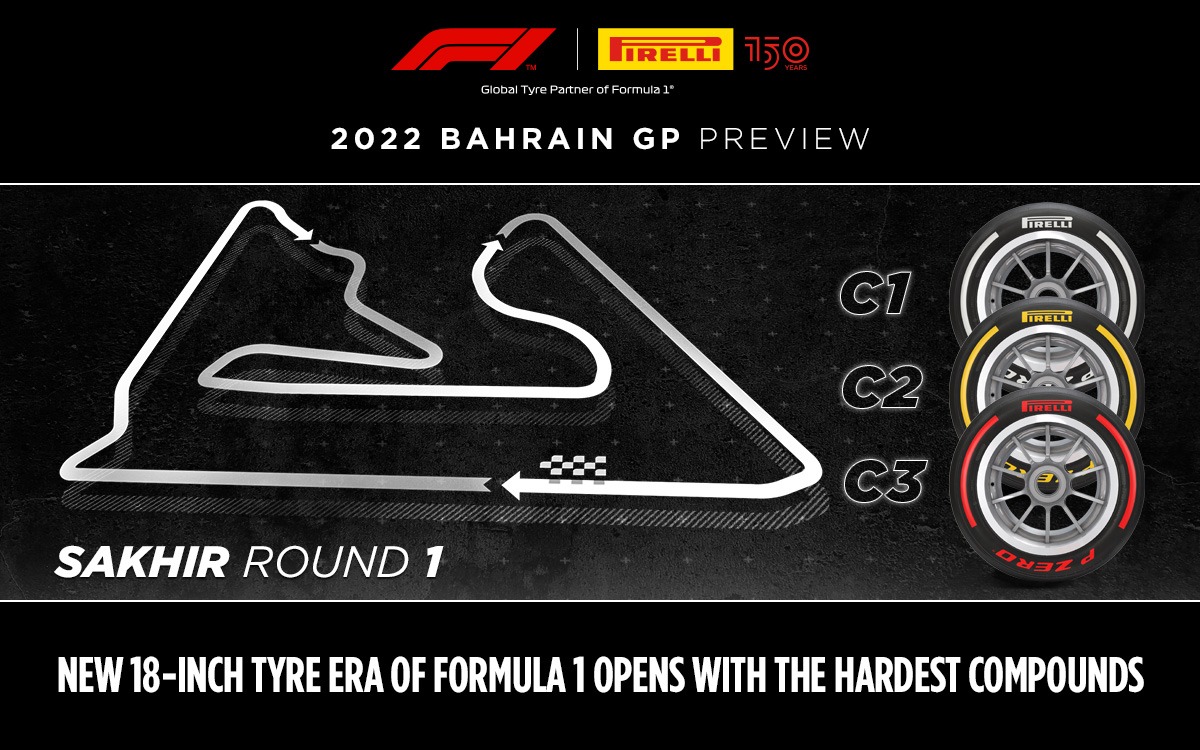 Pirelli explained their choice to go with the hardest option with a statement from Motorsport Director Mario Isola in a press release: “We’ve opted for the hardest tyres in the range for this first grand prix given the track layout, asphalt characteristics and temperatures: also because the compounds are different compared to previous years. The teams had the chance get familiar with the 2022 18-inch tyre range, having spent a total of six days of testing with all the compounds, although not always in representative conditions.

We know from the past that track temperatures can play an important role in Bahrain, affecting tyre degradation, and that’s something we noticed at the recent test as well. During the race temperatures should be milder compared to FP1 and FP3, so the teams will have to focus on their data from FP2 and qualifying. It’s still hard to predict the race strategy as, in the past, Bahrain has been a multi-stop race, but it will be interesting to see if anyone will try something different this year”.

The tyre allocation for 2022 will remain fixed, as the teams will not be able to decide the exact number of sets for each compounds.

Who will be on the 2022 Bahrain Grand Prix podium?

The first round of any championship will obviously bring excitement to fans, although there will be many that are expecting the FIA report about the 2021 Abu Dhabi GP affairs before really enjoying the first race. 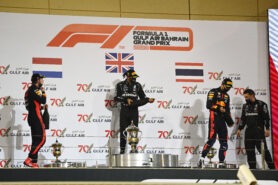 Still, the 2022 Bahrain Grand Prix will always be remembered going forward as the start of a new era, and we should certainly appreciate that. The new “ground effect” era of Formula 1 is about to start, and it is always fun to try to predict the results that we could see on Sunday.

It could also be a great opportunity for other teams to shine, with the likes of Alpine and Aston Martin hoping to join the party at the front and challenge for top results from the start of the 2022 campaign.

Although we’ve talked about Ferrari’s impressive outing in testing, betting odds continue to be on Max Verstappen and Lewis Hamilton and their rivalry. Verstappen is a slight favorite over Hamilton to win the season-opener, but it could certainly be a multi-team battle in the first round of the race. Ferrari’s pair of Leclerc and Carlos Sainz sit third and fourth for most oddsmakers, ahead of Mercedes’ George Russell.

The prediction for the top three of the 2022 Bahrain Grand Prix is 1. Charles Leclerc, 2. Max Verstappen, 3. Carlos Sainz.