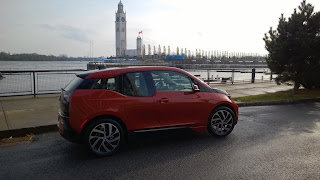 Hello, my name is Francis and I was born electric two years ago on November 13th, 2014.

I opted for the BMW i3 with the range extender and I have been sharing my electric experience with my fellow Quebecers. I even did a lengthy post after my first year that covers pretty much everything. I’m also an owner that didn’t code my i3 to change the range extender behavior in North America (some would call me crazy and yet I never had a problem with the REX).

So why post again after my 1-year report? Simply because this year was everything but usual. One question we all asked ourselves, what would happen if my driving habit changed, would my electric car still meet my needs? Ever thought about a family emergency? Would my i3 allow me to make it in time? That’s what happened to me, more about it later.

In my first year, 64% of all my driving was city driving and 36% was highway driving, mostly going to see my folks. In the first year, the DCFC network was just starting to be deployed, so the REX ended up being very handy on those 650 miles round-trip. But this year, it’s completely reversed and I did 60% on the highway and 40% city driving. So how did my i3 perform since it was designed to be a “city” car?

DCFC: Yes they matter, they change everything


So did I improve my numbers? YES! The main reason isn’t the i3. In the 2 years I had it, my province invested in a cohesive deployment of DCFC creating charging corridors. Number of DCFC in Québec when I ordered my i3: 1 CHAdeMO only. Number of DCFC as of today: Over 60 with both CHAdeMO & CCS. Boy did I bet on politicians to deliver and they did! But more important, they are distributed along key highways (East-West, North-South) where they are needed the most. From Ottawa to Percé, it’s over 1000Km/650miles of road where you can find a DCFC well positioned.

What we may lack in quantity, we gained in quality of positioning. And more are planned in 2017. The federal, the provincial and local governments are investing, the momentum is there and no election in view to stop or question these planned investments.

The direct impact of this added infrastructure was: In the first year I used 35 gallons (132 litres) and this year I only used 25 gallons (91 litres) despite doubling the number of miles on the highway where the REX is mostly solicited.

But where the i3 does make a difference; having the REX also means you can optimize the way you use DCFC. BEV owners will always charge a little more than they need to reach the next DCFC or their destination, meaning longer wait time, longer trip. Having the REX, I only charge just enough to reach the next DCFC (or the 2nd next) without being afraid of being short on electrons. That means less time charging and more optimal charging because as you know, the i3 will accept more power and recharge faster when it’s empty (like all EV for that matter).

Compared to my first year where I did long stretches on the REX, now it gets solicited the way it was designed for, to give you a little boost to reach your destination when you need it.

DCFC charging isn’t free in Québec, it’s 10$/hours. A 20 minutes charging session will cost you less than 4$. That’s all in CAN$ of course. So in the last 2 years, how much use have I done? In the first year, 32 DCFC sessions, this year, 87 DCFC sessions. 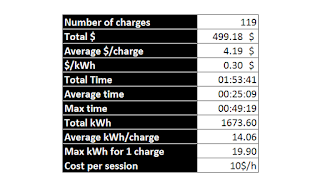 Some may say it’s expensive, but compared to gas, it’s still less expensive (at least here in Quebec where gas is taxed). The following table also shows you the impact the increased number of DCFC had. You can see the ratio EV/GAS increasing over time.


In the last 2 years, I kept track of all my mileage and all my expenses to check if my initial assumption was true, that driving an electric car is not only good for the environment but also good for my bank account.

As you will see I’m comparing with my previous car, a Nissan 370Z Roadster. I can already see eyes rolling and some saying this not a fair comparison. Well for me it is, both car cost me about the same before provincial and federal taxes (I bought both cars, leasing conditions were bad for both). The enjoyment and driving dynamics are about the same. I could have compared to a BMW X1 fully equipped, but I opted to compare something I knew. (As a FYI, electricity cost is around 0,08$CAN/kWh and Gas is around 1.30$/litres (super))

With all that being said, below you will find my dashboard that I keep updated to track how efficient the i3 is and how much money I have been saving. 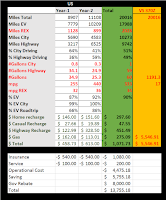 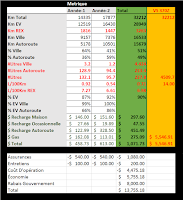 It’s been 2 years and new options are available, what will I do?

That’s a question I’m starting to get more often. Will I upgrade to the 2017 BMW i3 with the 33kWh pack? Will I change for the Bolt? Did I put money down on the Tesla Model 3? The answer is NO to all of those questions, let me explain why for each.

2017 BMW i3 33kWh: Would I like to have the increased range on long trip? Totally, but the reality is that it wouldn’t change much of the numbers you have seen before. I still need to use the same number of kWh to get to my destination, meaning I may stop less often but when I will, I will stop longer. So instead of stopping 3 times for 20 minutes each time, I’ll stop twice for 30 minutes each time. I may be able to reduce my usage of the REX a little more, but it’s not worth taking the financial hit (the i3 depreciation). Do I recommend the 2017 BMW i3 33kWh with the REX? Totally! It’s a unique package on the market, a fail-safe flexible solution.

2017 Chevrolet Bolt: I think GM pulled a very good product out of their hat (based on early reviews). With the DCFC network being built up, range limitation isn’t an issue anymore, but I would still need to stop 45 minutes to 1 hour each way in my 650 miles trips.

20?? Tesla Model 3: Well, I don’t want to steer any controversy, but the reality is, before we see the first delivery in our area, it may be 2019, 2020. It will all depend on Tesla capacity to increase its delivery numbers on a new model. I admire Elon Musk will and vision, but meeting delivery dates isn’t part of Tesla mantra yet. But the same observation I did for the Bolt applies. The Model 3 will need higher density of Supercharger until then, Model 3 will rely on the DCFC network and will recharge at the same rate as the Bolt.

So at the moment, I’m keeping my i3, it’s a fun car to drive, it’s the perfect city car and it meets my needs, I will continue to check the arrival of new EV model and in 2020, options will be a lot greater than the ones I had in 2014. My answer will probably change at that time. And that’s the good news here, more options for different needs will push EV forward. 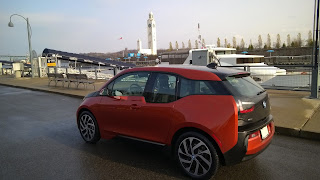 Can an EV live up to the changes in your life?


Also, one question most people have is: Will my EV be there when I need it the most? On the very active BMW i3 Facebook group, occasionally we see someone posting they are selling their i3 because they changed jobs, they moved, etc… So is it true, because if it is, EVs future isn’t bright.

My i3 is my only car, no backup plan, so what happens if my habits changes? Well it did this year. This part is really personal, but I want to share this experience, as painful as it can be. My mother got ill last winter and I did my best to be at her side as she was going through it.

That meant doing a lot of driving from Montréal to Québec City (about 325 miles round-trip) and back to my folks (650 miles round-trip), over 6000 miles doing highway driving where failure wasn’t an option. In May, my brother called me, it was time to go back to give one last goodbye to this amazing woman that was my Mom. Driving back, at one point I decided to let go of the EV driving and ask REX to get me back to her faster, because that’s one of the key reason I added the REX, to have the option and the REX delivered, again. I did make it in time. She left us a few days after.

You think about this kind of situations when you buy a car, but when confronted to it, the REX that some people like to ridicule, it just makes sense. It’s not just the freedom flap, it’s the peace of mind flap.

Thanks you for reading and I hope it will help undecided people looking into driving an electric car. You can read previous posts here: