We list the fastest production motorcycles you can ride in 2019.

Some folks love going fast. And if you’re a motorcycle riding fan, you can quench the need for speed with this selection of the fastest production motorcycles for sale today. All you need is a motorcycle endorsement, a complete set of riding gear, including a full-face helmet, jacket, pants, gloves, and boots, and you’re off to your destination as quickly as possible. If you want to go fast and have cash to spend, these are the motorcycles we consider the right tools for the job. Of course comfort and safety are always a consideration, so we are including cozy mounts for the gentleman, or gentlewoman, speed demon. 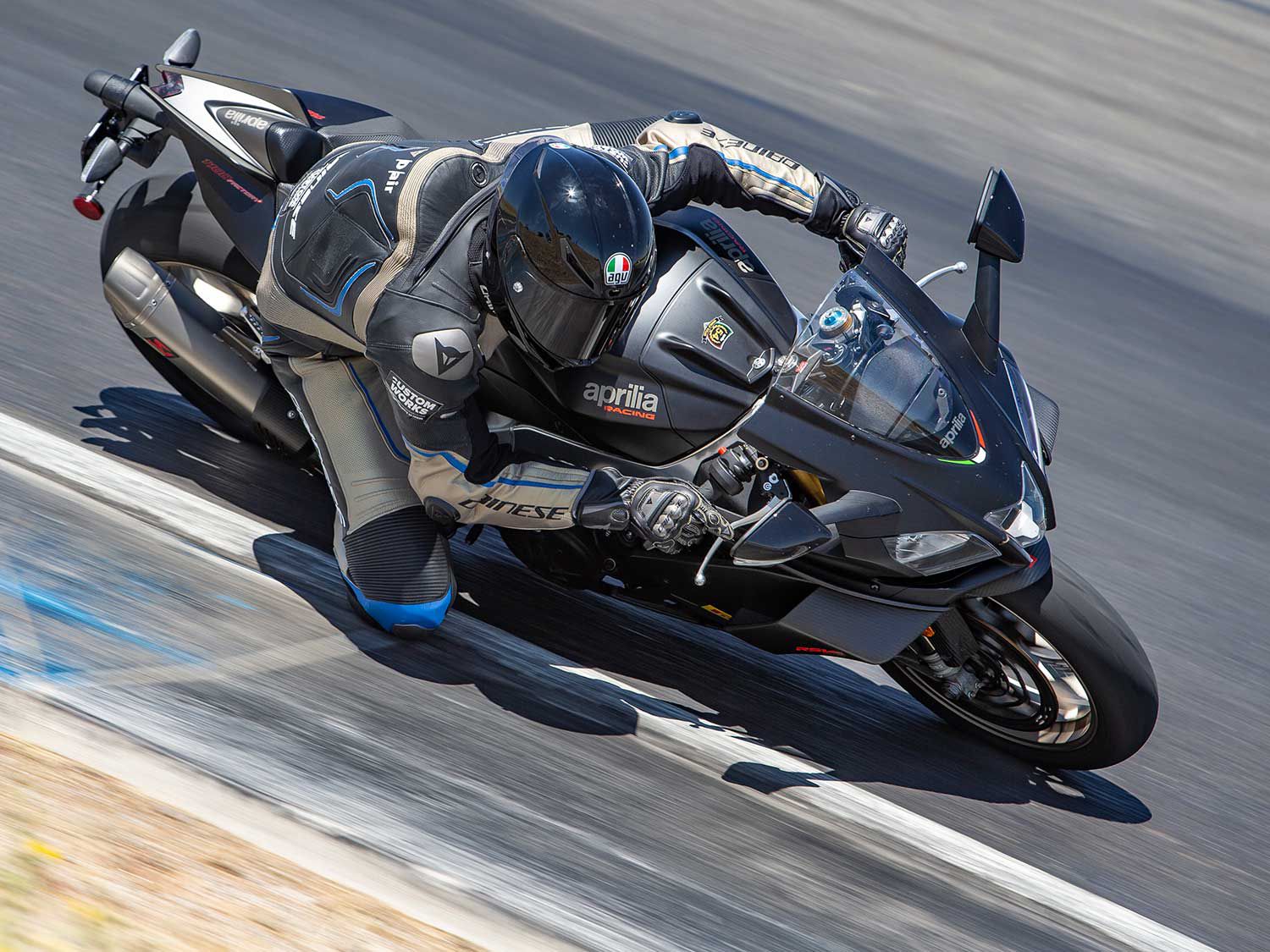 It’s not only fast, but the Aprilia RSV4 1100 Factory is exhilarating to ride and loaded with class-leading electronics. (Jeff Allen/)

When it comes to plus-sized superbikes, no one builds a better bike than Aprilia and its 2019 RSV4 1100 Factory. This season it sees its already powerful liquid-cooled V-4 engine punched to 1,078cc. This upgrade boosts power with it belting nearly 190 hp and 82 pound-feet torque at the business end of the Pirelli Diablo Supercorsa rear tire. Paired with a fully fueled 439-pound curb weight and the Aprilia has an astounding (and class-leading) 0.43 power-to-weight ratio. Not only is the Aprilia fast, it’s compact too, and offers World Superbike-bred handling that’s at the top of the class. Those seeking an Aprilia that is nearly as fast but more comfortable for everyday riding should check out Aprilia’s more accommodating Tuono V4 1100 naked bike. 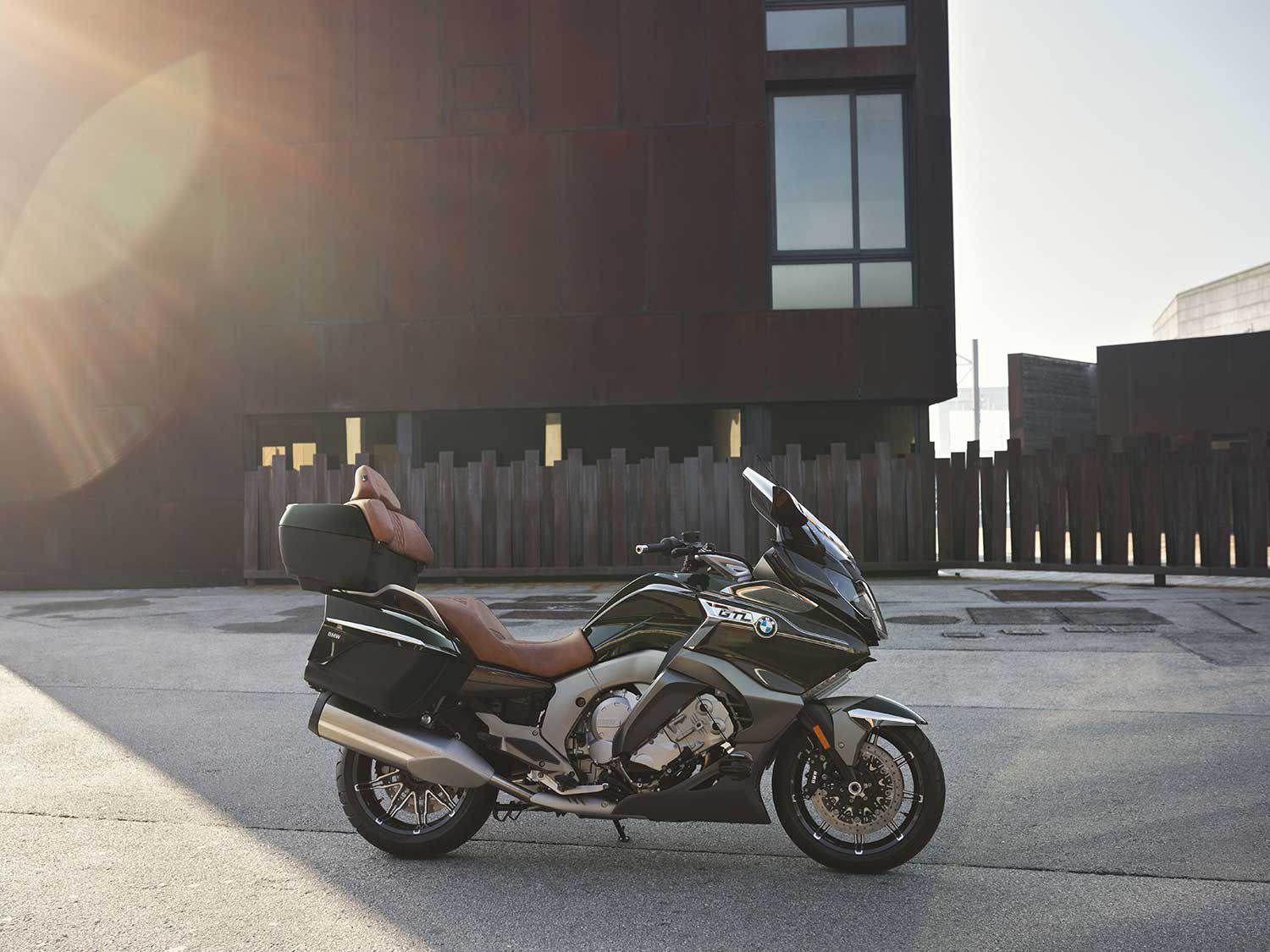 Designed for sport-touring, the K 1600 GTL with its six-cylinder engine is one of the fastest motorcycles you can buy. (BMW Motorrad/)

BMW understands that some riders not only want to travel quickly but comfortably too. This group will adore the awesome K 1600 GTL. Positioned as a sport touring bike, the K 1600 GTL is the most high-performance touring rig made today. It’s powered by a huge 1,649 inline-six powerhouse that pumps out 126 hp and 106 pound-feet peak torque. While the horsepower number isn’t as impressive as other machines, the engine’s torque output (more than 90 pound-feet from just above idle) does the heavy lifting, literally, moving this ultra-posh 772-pound bike to speed in a way few sport motorcycles can match (0.16 power-to-weight ratio). For those who prefer riding long and low, BMW also sells a bagger version in the K 1600 B. 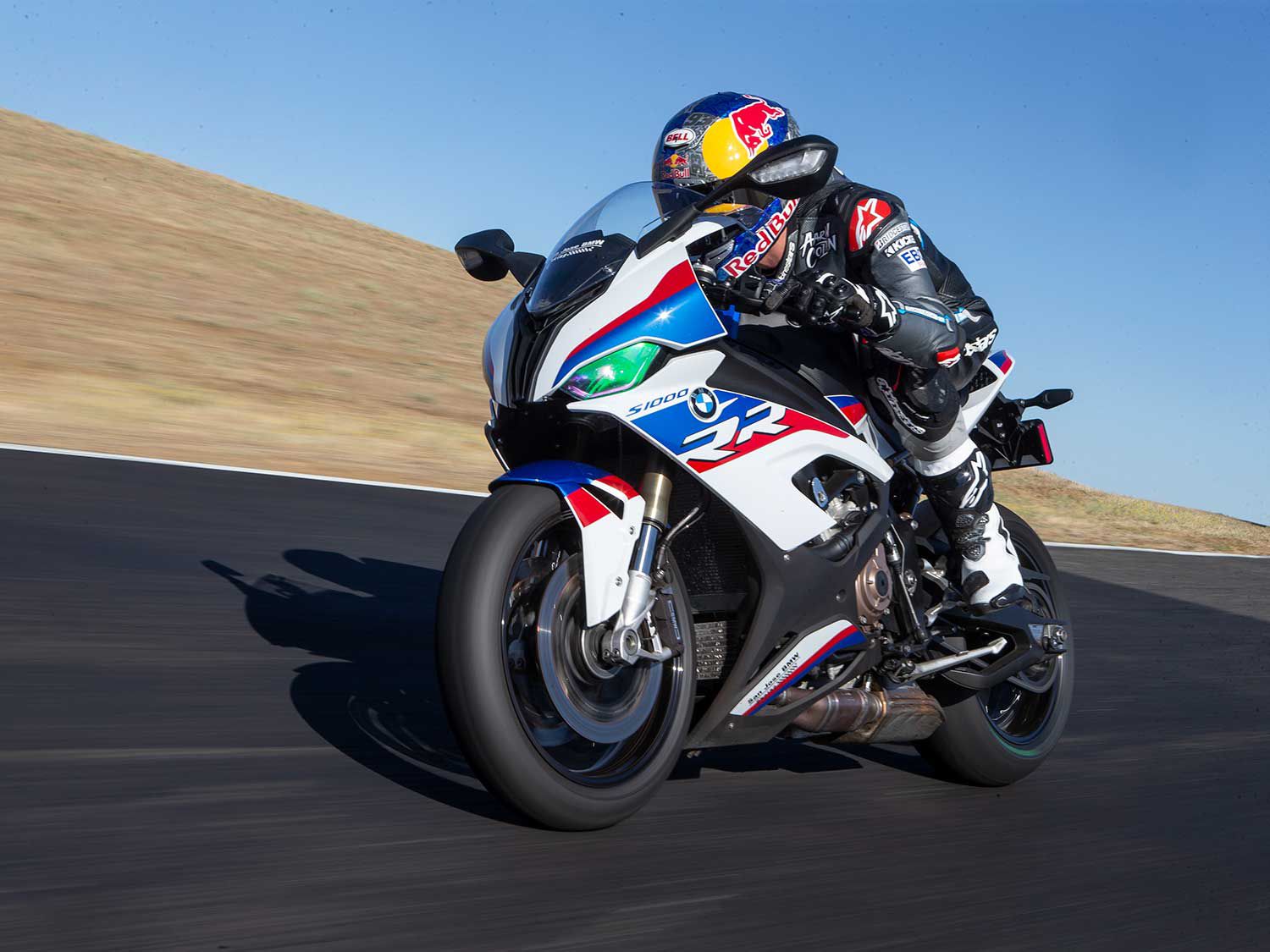 For more than a decade, BMW’s S 1000 RR has been one of the fastest production motorcycles you can buy. (Jeff Allen/)

BMW is at the top of the heap in the liter-size sportbike class with its S 1000 RR. For 2020, BMW overhauled its flagship sportbike in an effort to make it faster and easier to ride. It’s powered by an all-new and more compact 999cc inline-four engine that belts out nearly 183 hp at the back tire. The engine now benefits from BMW’s ingenious ShiftCam technology giving it the best of both worlds: punchy bottom-end power and fuel-sipping mpg, with a rush of high-rpm power. With a fully fueled 434-pound curb weight in standard configuration and 7 less in up-spec M trim, the mighty German bike offers a 0.42 power-to-weight ratio. Like Aprilia, BMW offers a more street-friendly superbike derivative, sans fairings, with its S 1000 R. 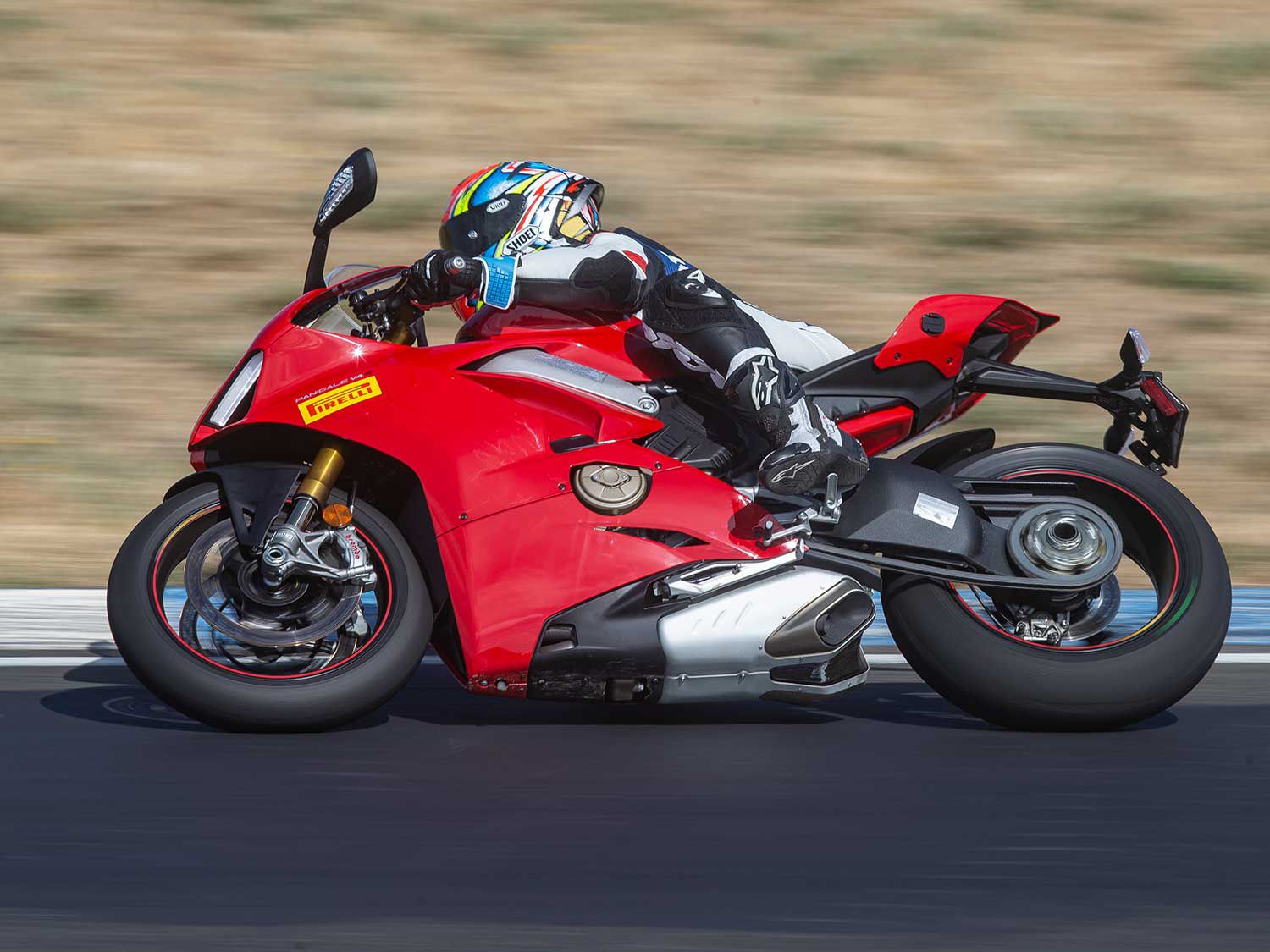 It wouldn’t be a fast bike party without a Ducati superbike. And the 2019 Ducati Panigale V4 is raring to play. As its nomenclature states this Italian rocket is powered by a legitimate MotoGP-derived 1,103cc V-4 that barks as hard as it bites. The engine is good for 186 peak horsepower and 80 pound-feet torque. This gives the 436-pound a borderline ridiculous 0.43 power-to-weight ratio that’s even higher than the mighty RSV4 1100. Not only is the Ducati V4 a powerhouse, it has the look and pedigree to back its raw muscle. Ducati teased a more upright-position Streetfighter V4 version earlier in the year, but that edition has yet to be announced as a production bike. 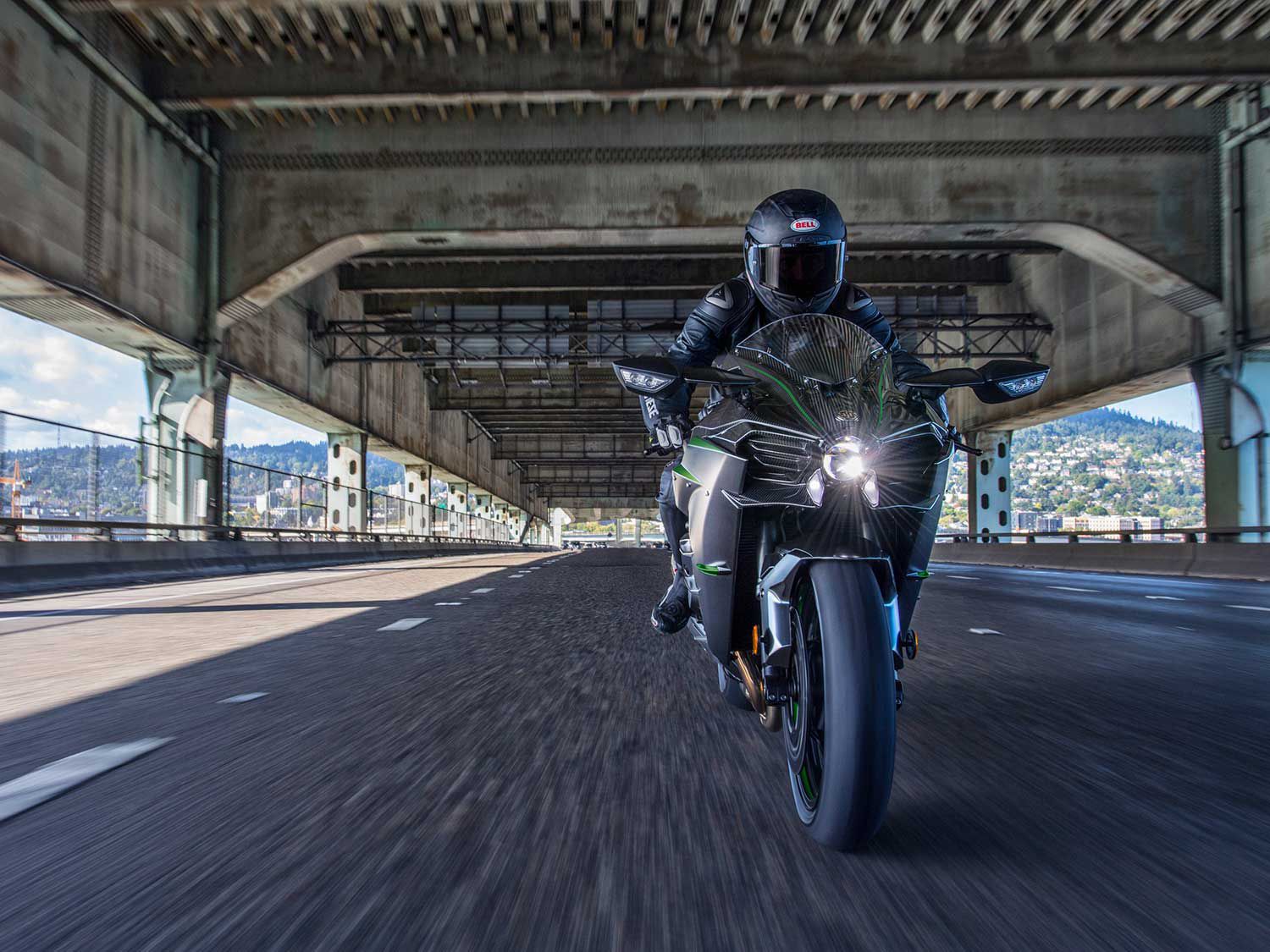 Kawasaki’s Ninja H2 is built for riders looking to quench their need for speed. (Kawasaki/)

Kawasaki has a long history of building fast bikes. And its supercharged 2019 Ninja H2, is the fastest street-legal motorcycle that Team Green offers. The Ninja H2 slots into an interesting segment; not quite a traditional sportbike, nor a naked or touring-machine, the H2 is focused on straight-line acceleration, with an exhilarating roller coaster-like experience when you’re full throttle. The H2 is powered by a water-cooled 999cc inline-four engine that benefits from a purpose-built forced air-induction supercharger. The H2 generates nearly 190 hp and a whopping 90 pound-feet peak torque. This obnoxious level of power gives the 525-pound Ninja a power-to-weight ratio of 0.36, and an experience like no other bike on the road. 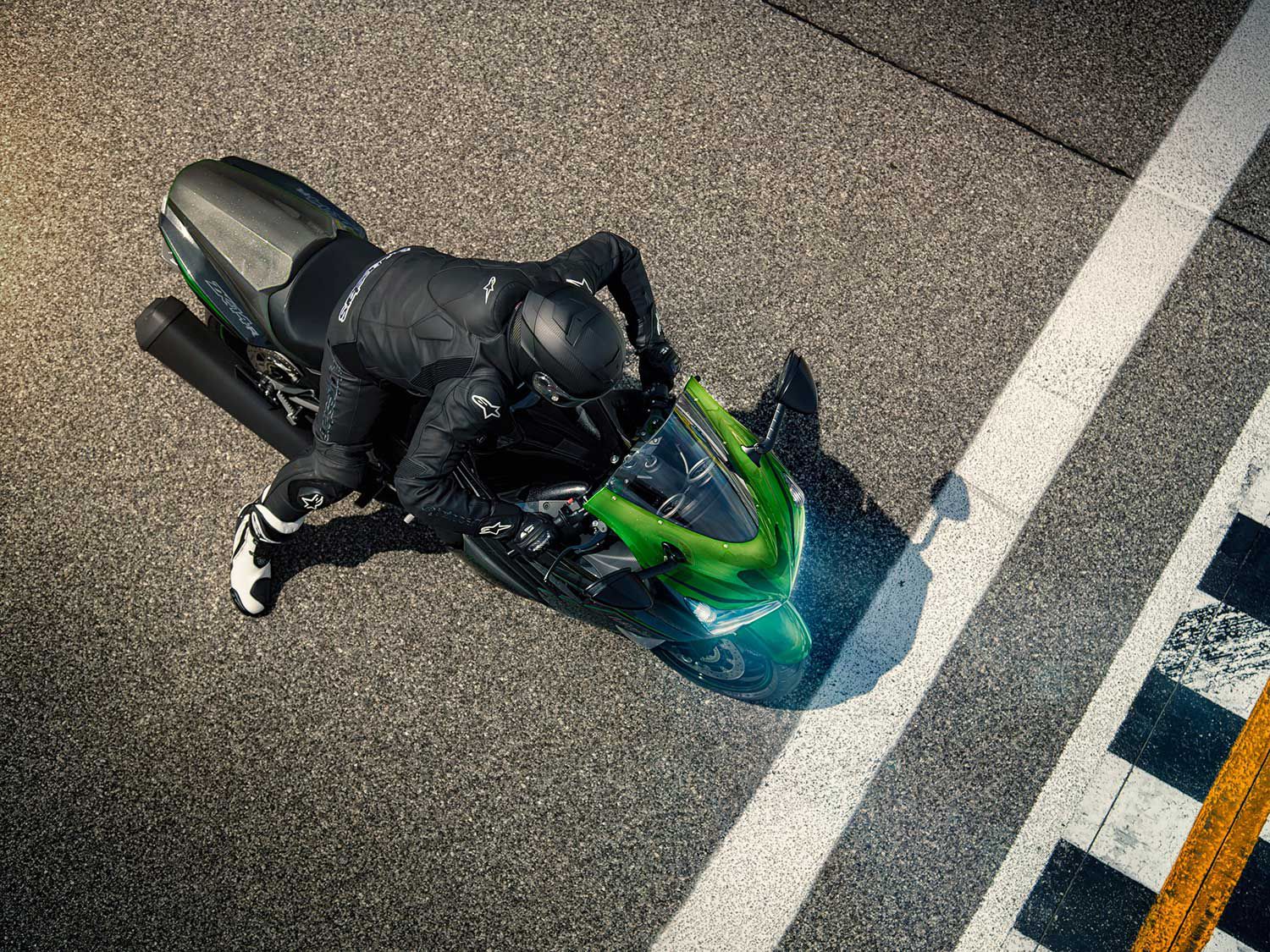 Kawasaki’s Ninja ZX-14R is a drag-racing demon that’s equally as comfortable as it is fast. (Kawasaki/)

Kawasaki’s Ninja ZX-14R is the biggest-displacement sportbike Kawasaki makes today. Engineered as an answer to the original land missile, Suzuki’s GSX1300R Hayabusa, the ZX-14R is one of the fastest motorcycles made. This Ninja is powered by a naturally aspirated and liquid-cooled 1,441cc inline-four that doles out 192 hp. Equally as incredible is its 113 pound-feet peak torque figure. Paired with its long, stretched-out wheelbase and the Ninja 14R is capable of sub-10-second quarter-mile times in a skilled rider’s hands. At 593 pounds, with a full tank of fuel, the green machine is certainly no featherweight, yet it still offers a 0.32 power-to-weight ratio. 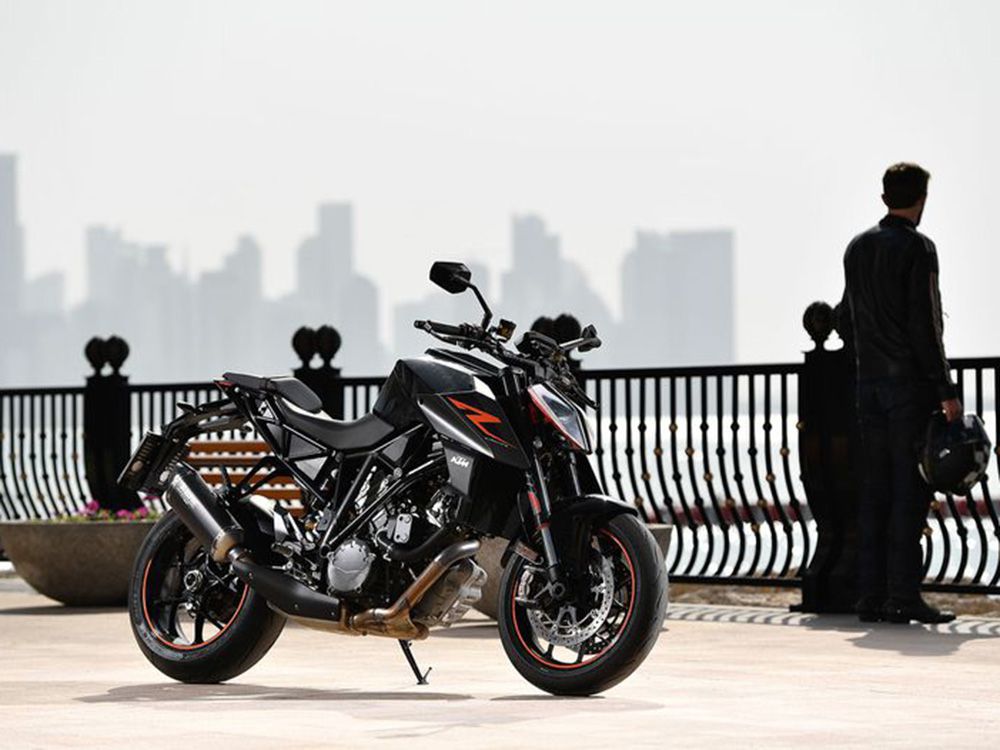 KTM’s 1290 Super Duke R is not only one of the fastest motorcycles you can buy, but it’s also one of the most exhilarating. Although it doesn’t employ forced-air induction like the Kawasaki, nor full fairings like the RSV4 or S 1000 RR, the Super Duke R is still ridiculously quick. The KTM is propelled by a gigantic 1,301cc liquid-cooled V-twin. On our dyno, the mighty Duke registered 155 hp and nearly 93 pound-feet peak torque. With a fully fueled curb weight of 470 pounds, the orange bike offers an impressive power-to-weight ratio of 0.33. Also consider its more relaxed ergonomics that make it more comfortable to ride than a traditional low-slung sportbike. 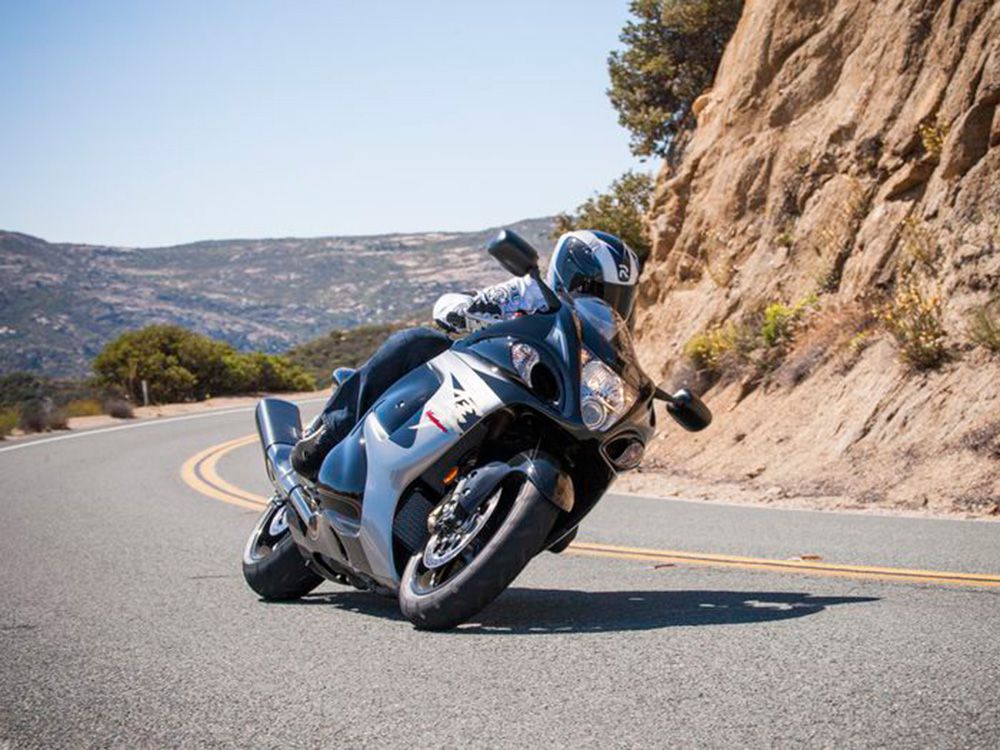 Suzuki blew the doors off the competition when it released its first Hayabusa as a 1999 model. It was so fast, so loud (to the eye, with its bird-like styling), and so popular, it sparked a cold horsepower war between it and Kawasaki. Although it’s been a while since this second-generation GSX1300R has seen any updates, it remains a formidable straight-line rocket courtesy of its 1,340cc water-cooled inline-four. The engine is rated at 166 hp and 101 pound-feet torque. This equates to a 0.28 power-to-weight ratio for the 586-pound Hayabusa. It certainly isn’t the newest motorcycle in this group, but it remains one of the quickest and most comfortable. 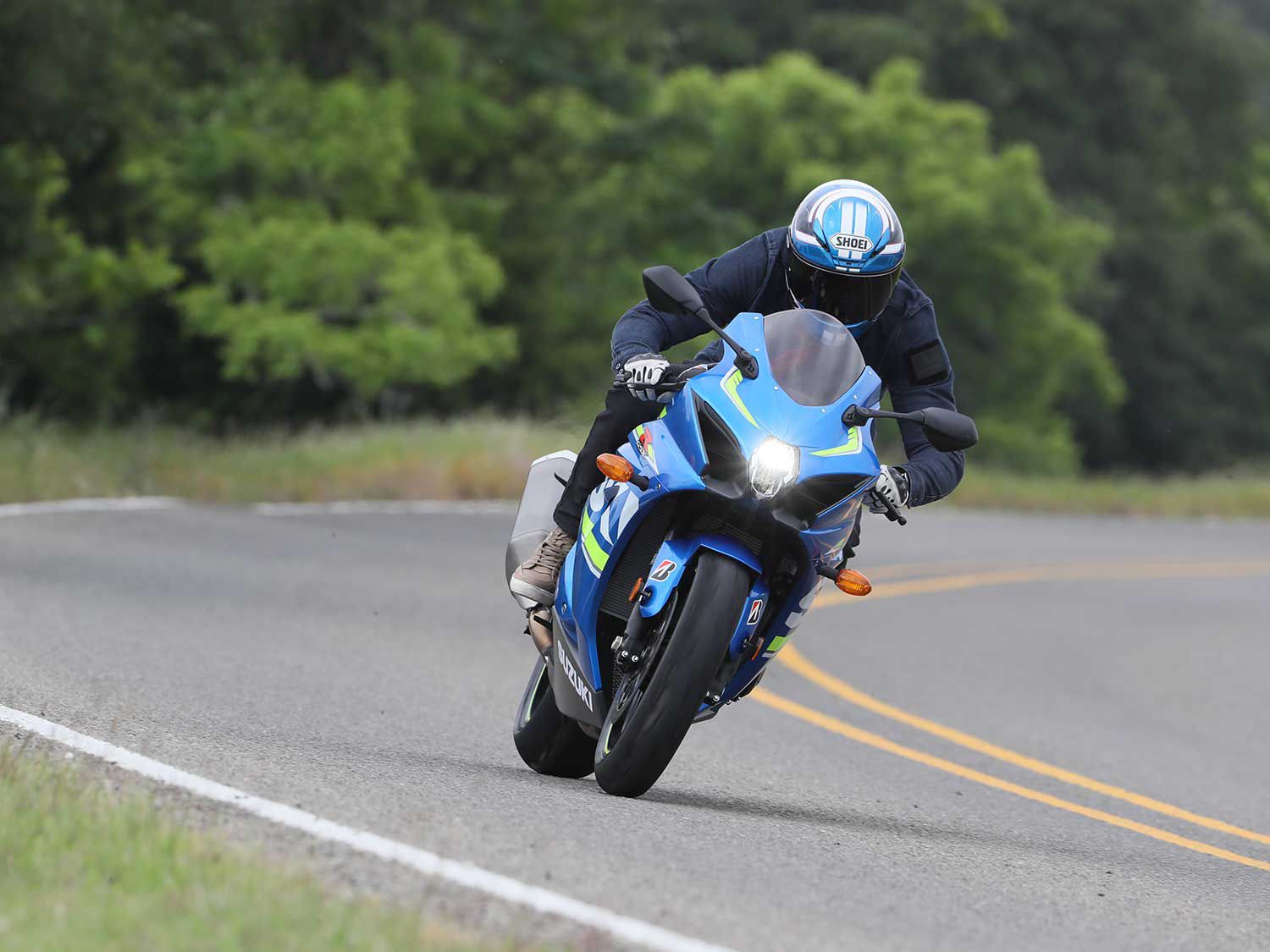 Suzuki’s GSX-R1000 has been one of the fastest production motorcycles you can buy for more than 16 years. (Brian J. Nelson/)

For 16 years, Suzuki’s GSX-R1000 has been smearing rubber around racetracks worldwide. The original King of Sportbikes, the GSX-R1000 is powered by a 999cc inline-four engine that was overhauled for the 2017 model year. During this redesign, Suzuki’s top-of-the-line GSX-R gained variable valve timing, which like the new S 1000 RR, affords peppier midrange power without compromising top-end. When it comes down to business, the Suzuki’s engine is good for 155 hp and 75 pound-feet torque. Although that isn’t the highest in this bunch, it’s enough to give the 443-pound Gixxer a highly favorable 0.34 power-to-weight ratio. It’s also one of the least expensive new motorcycles in this group. 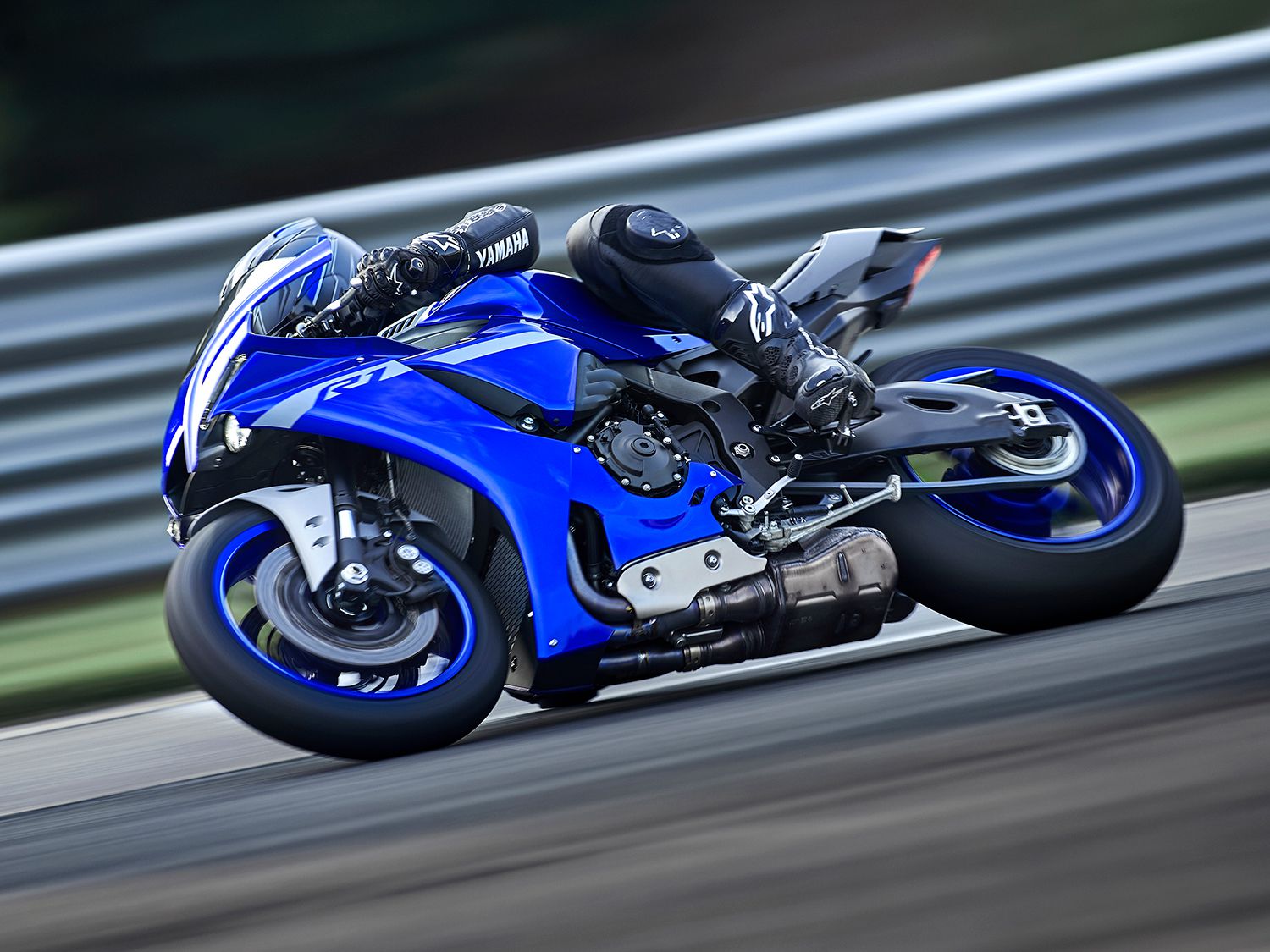 As expected, Yamaha’s new 2020 YZF-R1 makes our list of the fastest production motorcycles you can buy today. (Yamaha/)

Yamaha’s YZF-R1 revolutionized the liter-sized sportbike class with its original 1998 YZF-R1. Over the years the R1 has evolved, becoming bigger, then smaller, but the current-generation 2020 YZF-R1 remains one of the fastest production bikes you can buy. The R1 is powered by a 998cc liquid-cooled inline-four, with a twist. The engine employs a unique, MotoGP-derived firing order that gives it the low-end grunt of a twin and the high-rpm wail of a conventional I4. Good for 162 hp and 73 pound-feet torque at the rear Bridgestone tire (2015–2019 model year), the 448-pound Yamaha has a 0.36 power-to-weight ratio. It’s also one of the newest sportbikes available receiving a mild update for 2020. 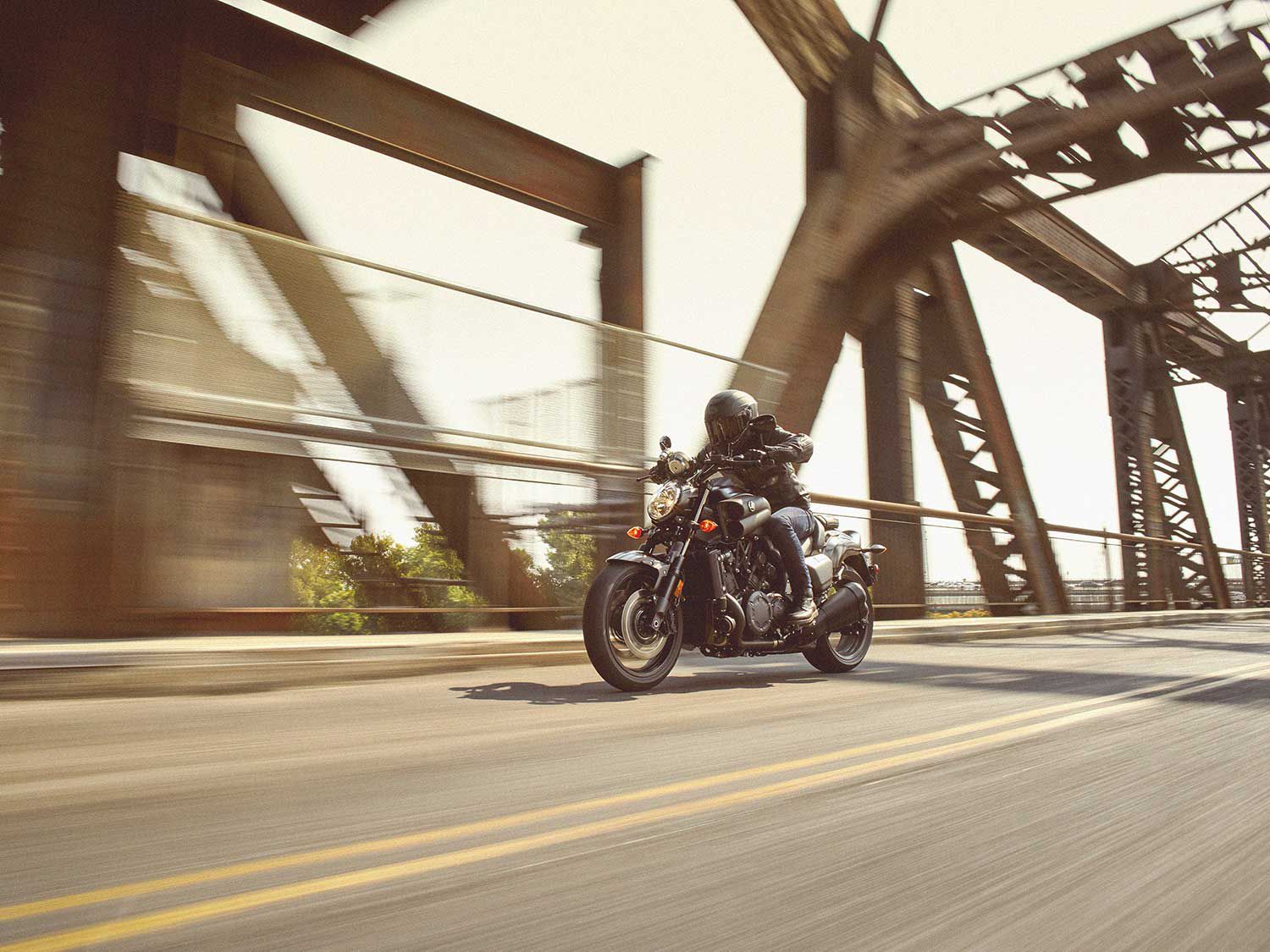 For decades, Yamaha’s VMAX has been the bike of choice for those who want to burn rubber away from stop lights. (Yamaha/)

Folks who love to drag race from stoplight to stoplight will appreciate Yamaha’s VMAX. The original power cruiser, the current-generation VMAX was released in 2009 as an all-new model. It’s powered by a giant 1,679cc water-cooled V-4, that produces 174 hp and a tire-smearing 113 pound-feet torque propelling this 683-pound heavyweight to a power-to-weight figure of 0.25. Although it isn’t the most-impressive number, this power cruiser boogies in a straight line like no one’s business. And with its more relaxed ergonomics and bruiser-cruiser lines, it will be a more popular choice for riders who don’t want the flash or discomfort of a sportbike.

2005 Cadillac CTS-V Is Our Bring a Trailer Auction Pick