We recently covered that the Madras High Court has ordered Tamil actor Vijay to pay Rs. 1 lakh for failing to pay entry tax for his Rolls Royce Ghost. Now, Vijay’s lawyer said in the latest hearing that they should have been fined 2 percent per month instead they have been fined 400 percent. 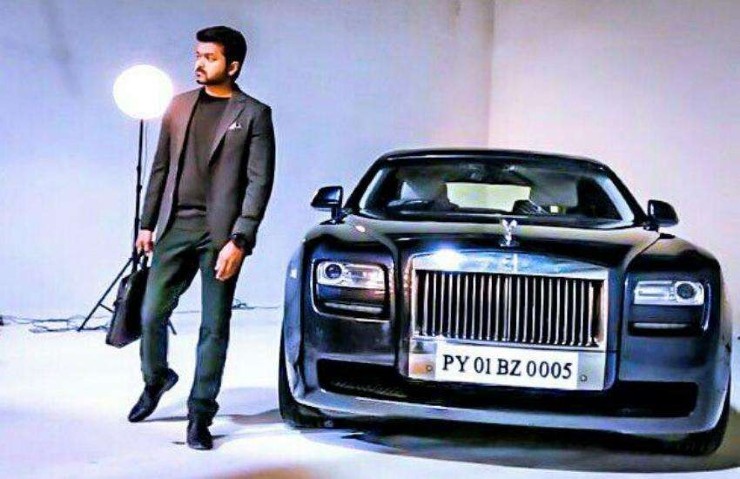 Vijay bought the Rolls Royce Ghost in December 2005. It was imported from the US. The Commercial Tax Department of Tamil Nadu directed Vijay to pay entrance tax for the Ghost. Vijay filed a case in Madras High Court seeking tax dismissal. However, the plea was rejected by the court by saying that the actor has a large fan base and he is not expected to evade tax. The court also said that the common man is motivated and encouraged to pay tax but rich and reputed people fail to pay tax.

Yesterday, Vijay’s lawyer said that they would only be fined 2 percent per month from the time the car was imported but that they had been fined 400 percent. The Tax Department requested the court to dismiss the case and to impose a fine for delay in payment of tax.

The ruling by Judge Subramaniam done on July 8 said, “Those fans see such actors as real heroes. In a state like Tamil Nadu, where such actors have become rulers of the state, they are not expected to behave like a ‘reel hero’. Tax evasion is to be construed as an anti-national habit, attitude and mindset and unconstitutional. These actors are portraying themselves as champions to bring social justice in the society. Their movies are against corrupt activities in the society. But, they are evading tax and acting in a manner, which is not in consonance with the provisions of the statutes,”

Vijay was ordered to pay tax

India has one of the highest import taxes in the world. Elon Musk also stated the same when he was asked about the status of launching Tesla in India. People often try to avoid paying such huge taxes through illegal ways. The import tax is around 20 percent of the cost of the vehicle that is being imported. So, for a vehicle like Rolls Royce Ghost that costs multi-crores, the import tax can be in lakhs. We do not know exactly what Vijay paid for the Rolls Royce. What is interesting is that the authorities do not let the vehicle enter without paying the taxes but the Rolls Royce was delivered to Vijay without paying the taxes.

Vijay is one of the few celebrities of India who owns a Rolls Royce. The Ghost is the most affordable Rolls Royce and the Tamil actor has been spotted numerous times in it during movie promotions or to reach events.

Via Times Of India