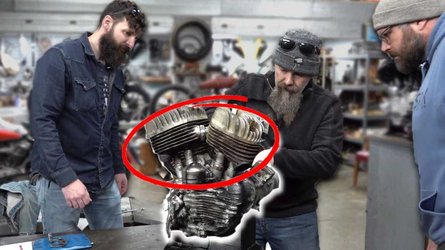 Picture this: You found one of your wishlist bikes, and you showed up at the appointed place and time to have a look. Then, to your surprise, you found a different bike sitting next to it that you’ve wanted forever. It wasn’t what you went there to look at, but you know you’ll be kicking yourself if you don’t at least make an offer. So, you do—and to your delight, the seller accepts. Money changes hands, and you end up going home with a dream you didn’t expect to even meet today.

That’s basically the short version of how the SRK Cycles guys ended up with a Harley-Davidson WLA back in September, 2021. Despite having a history that involved spending decades in a junkyard before coming into the hands of its previous owner, the bike was a runner—but the SRK guys knew it needed more TLC. As they started to delve into this WLA’s charms and mysteries, though, they soon realized there was way more to the story than they understood.

That’s why they took the engine and some parts of the bike on a 10-hour drive up to Wheels Through Time, for a consult with the one and only Matt Walksler—which is what this particular video is all about. What they found out is pretty amazing, too. You see, this wasn’t just any old WLA that they’d managed to get their hands on. Upon closer inspection by Walksler, those happen to be a much rarer set of WLDR cylinders, complete with aluminum cylinder heads. In fact, Walksler’s exact descriptor in this video is “unobtanium.”

Diving deeper, this engine only gets even better. Down in the bottom end, it turns out that the cams match the cylinder heads in their WLDR specification. In other words, it’s a pretty special and valuable engine the SRK guys have lucked their way into.

By the end of the video, they’ve thankfully made the wise choice to leave it in the capable hands of Matt Walksler and the WTT workshop for a rebuild. It’s far from the last video they plan to make about this bike’s journey, so we look forward to finding out more fascinating secrets behind this bike’s history.