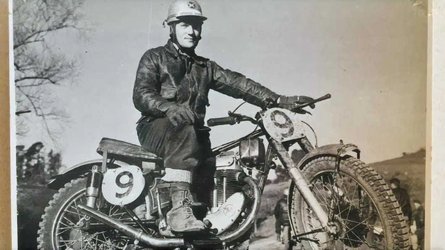 Seven-time New Zealand national off-road motorcycle champion Ivan Boorer died in Perth, Australia on February 15, 2022. He was 86 years of age. No cause of death has been made public at this time. A proud son of Timaru, NZ, he gained fame in the local motocross community, with a racing career that spanned from the 1950s through the ‘70s. He’d been living in Perth, Australia for the 15 years prior to his passing.

Boorer’s first championship title came astride a 1951 Matchless G80C, at the 1958 Open Hill Climb Championship. His final title came in 1969, when he won the 500 Miniature TT while riding a Hagon 350.

As any good moto enthusiast would, Boorer also enjoyed the company of a number of other machines over the years. The first bike he purchased was a James Captain De-Luxe, which he purchased in 1951. He wanted to go do some trials competitions with it, so he had to modify it slightly by removing the headlight in order to compete. A modified Excelsior 197cc soon followed, as did a specially-crafted machine by local Timaru mechanic Joss Tims, powered by the motor from a 1938 Velocette 250cc. Boorer rode that machine to take victory in a 250cc Scramble on the South Island in 1956.

When Boorer wasn’t racing, he was still thinking about bikes. In the late 1960s, Ivan and his wife, Lorraine, visited the Isle of Man to see the TT. As she told Stuff.co.nz, he came back with two more bikes in tow. One was a Hayden grass tracker with a racing provenance, and the other was a 1965 Rickman Metisse.

The couple had one son, Darryl, whom Ivan encouraged to get into motorbikes. While Darryl did eventually get into them, the younger Boorer found that he preferred road riding to motocross, and went that route instead.

The family moved to Auckland, where Ivan’s job as a milk carrier was what he did for a living in between motocross events. One time, Lorraine recalled, he broke a couple of bones in his leg after accidentally hitting a marker post along the course. She ended up substituting for him on the milk run later that night. The incident prompted him to stop racing, simply because his job kept him running milk seven days a week and there was no one to really fill in if he was ever seriously injured.

“I think he missed it, but he would spend the weekends watching others at motocross,” Lorraine said. Her reminiscences are well worth reading, and we’ll include a link in our Sources so you can do just that.

Ivan Boorer is survived by his wife, Lorraine, as well as his son, Darryl, and two grandchildren. He was a beloved member of the South Canterbury Motorcycle Club, and would return there even in later years. We at RideApart send our condolences to his family, friends, and fans.