It’s no surprise that Royal Enfield is working on another motorcycle with the 350cc J-Series engine, which is rumoured to be called Hunter 350. The motorcycle has spied a lot doing test runs previously in and around Chennai, where the manufacturing plant of Royal Enfield is situated. Now, another video has surfaced on the internet, in which we can see a test mule of Royal Enfield Hunter riding at speeds of 100 km/h+.

In a YouTube video uploaded by “Pradeep on Wheels”, we can see a motorcycle rider riding a test mule of Royal Enfield Hunter 350 on the open highways around Chennai. The video was recorded by the YouTube channel owner in his action camera while he was riding behind the test mule of Hunter 350 on his Dominar. The Dominar was trailing behind the Hunter 350 at speeds between 115-120 km/h as indicated on the speedometer of Dominar. It shows that the Hunter 350 also was moving at similar speeds, thus showcasing its high-speed abilities.

The Dominar rider further gave a closer look at the Royal Enfield Hunter 350 through his action camera, which revealed more details about the motorcycle. The motorcycle was covered in a decent amount of camouflage over its fuel tank and fenders. The Hunter 350 has a rounded fuel tank and side body panels with rounded edges. The motorcycle also gets a black-themed engine and multi-spoke alloy wheels, similar to what we have seen in the Meteor 350.

Hunter gets a classic design 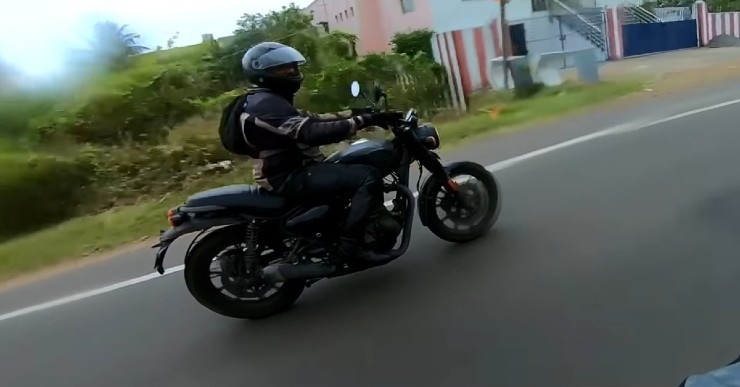 Further details of the Hunter 350 visible in the video are rounded headlamp, tail lamp and turn indicators, all of which are halogen-powered lights. The motorcycle also had an upright handlebar with silver-finished levers, split pillion grab rails, stubby exhaust can, long curved seat and a twin-pod instrument console similar to what is available in the Meteor 350. It indicates that the console will have an analogue speedometer with an LCD panel for other details in the bigger pod and Tripper navigation in the smaller pod.

Coming to the mechanicals, the Royal Enfield Hunter 350 spied was equipped with conventional hydraulic telescopic forks at the front and double coil springs at the rear, with single disc brakes at both ends. In all likelihood, the motorcycle will come with the same J-series four-stroke, single-cylinder, air-cooled, 349.34cc engine from the Meteor 350 and Classic 350.