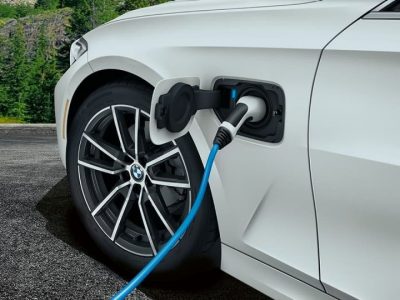 The big change in this year’s offering is the return of the plug-in hybrid in the 330e – BMW previously offered plug-in hybrids for its 2016, 2017 and 2018 model years. The 330e’s electric-only, emission-free driving range is 22 miles with rear-wheel drive and 20 miles with BMW’s xDrive all-wheel drive. BMW 330e offers a selection of driving modes: Electric, Hybrid, Sport and Adaptive. The electric mode, as its name would suggest, mostly keeps the gasoline engine on hold until there is a need for extra power, which can be achieved by pushing down hard on the gas pedal in order to animate the four-cylinder. At the other end of the spectrum, the sport mode puts the greatest emphasis on the gas engine and relies on the electricity when power boosts are needed.

According to BMW, this hybrid is powered from a lithium-ion battery beneath the car’s back seat and can charge seven times faster using a 240-volt home charger or a public Level 2 charger. The vehicle’s EPA fuel economy is estimated at 28 mpg for the rear-drive 330e and 25 mpg for the 330e xDrive AWD version, the company added.

The 330i offers a turbocharged 2.0-liter four-cylinder that generates 255 horsepower and 295 pound-feet of torque. The M340i pairs with a turbocharged 3.0-liter inline-six that creates 385 ponies and 369 pound-feet. The 330e plug-in hybrid combines a turbo 2.0-liter engine with an electric motor that produce 288 horses and 310 pound-feet.

All three trims in the series include an eight-speed automatic transmission and rear-wheel drive. BMW’s xDrive all-wheel drive is available on each model as a $2,000 option.