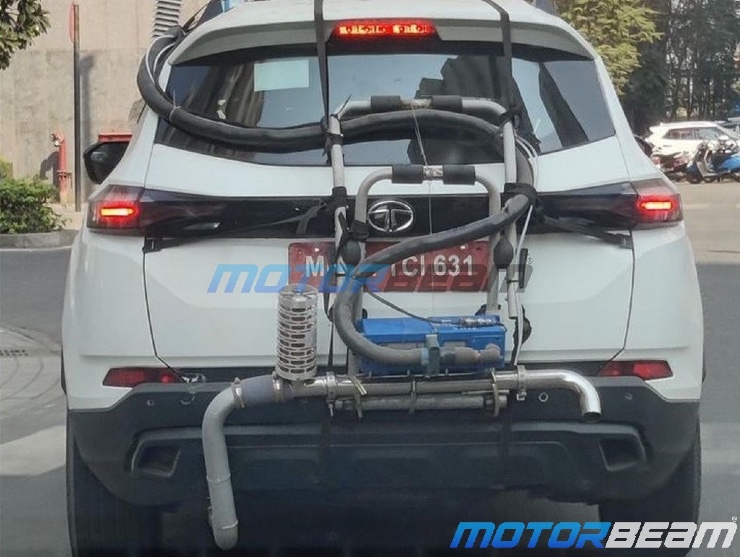 An undisguised test mule of Tata Safari was recently spied with an emission kit mounted on the back of it. It indicates that the Tata Safari is tested with an alternative powertrain option, with no changes to its visual appeal in and out.

Given that the test mule spotted by MotorBeam sports a red number plate, which is a norm for test mules with IC engines, it signals that Tata Motors might be testing a petrol-powered powertrain under the hood of the Safari.

This development of Tata Safari being tested with a possibly different powertrain comes soon after a few weeks of the Tata Harrier being tested with a different engine too. It further affirms the possibility that both the SUVs might share this new powertrain, considering that the current iterations of both the SUVs are powered by the same Fiat-sourced 2.0-litre diesel engine.

To get a new 1.5-litre petrol engine

As per the reports, both the Tata Safari and Harrier will share an all-new 1.5-litre four-cylinder turbocharged petrol engine. This engine has been derived from the 1.2-litre three-cylinder turbocharged petrol engine of the Tata Nexon and will pump out estimated power and torque outputs of 150 PS and 250 Nm respectively. Like the diesel-powered Safari, the petrol versions of the SUV will also be available with both the transmission choices of 6-speed manual and 6-speed automatic.

The petrol-powered variants of the Tata Safari and Harrier are the two speculated big launches from Tata Motors in 2022, as there is no all-new product lined up for launch from the Indian carmaker this year.