Yes, I had to state that, before someone else would inevitably have done.

I left the BANWR at 7:30 AM and by 9 AM or so I had fueled up the VRRV and topped off the onboard propane tank at Robles Jct aka Three Points; it’s the junction of AZ286 and AZ86.

I headed west on AZ86 and spent the almost two hours or so traversing the Tohono O’odham Nation.  Not much to see from the highway, just sagebrush and hills.

I got to Why and dumped tanks at the Wolf Howl East RV Park along with taking on a fresh supply of water.

Here’s why the town is called Why:  LINK.

I headed two miles south of Why on AZ 85 (which takes one eventually to the Organ Pipe Cactus National Monument) and turned west at the entrance to the Gunsight Wash BLM Area.  I’ve boondocked here before, back in the early days of my boondocking travels: The Southwestern Sojourn, Day 11

The place is way more popular with boondockers than the last time I was here!  Still, by driving further inwards away from the highway, I was able to find a nice spot that wasn’t too close to my neighbors:

Around 2:30 PM or so, I drove Scarlett over back to Why to see what kind of groceries one could get at the convenience store.  Not bad pickings but not great either.  It’s 11 miles or so to the Grocery Store in Ajo, AZ but I think I’ve got enough to feed me for the week or so I plan to be here.

The real objective was to cruise through the Why settlement and see what there was to see.  The answer, not much!  Here’s some pics of the murals at the Why Stop Store. 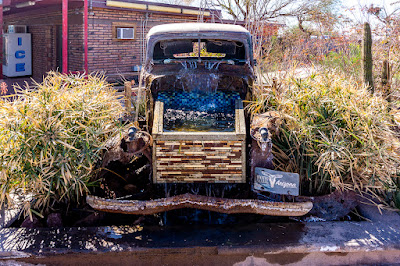 An old car turned into a fountain with music speakers

playing for the store’s customers 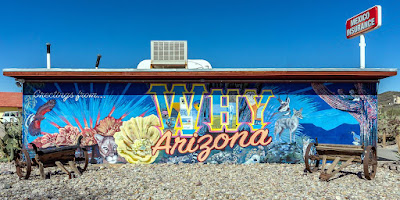 The back side of the restrooms

The side of the store itself 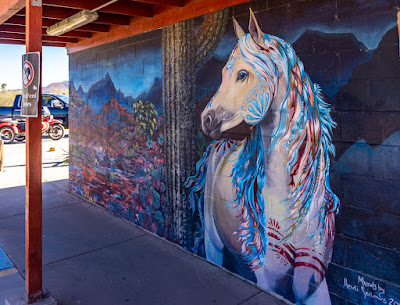 The front of the restroom building

I cruised through the settlement, not much to see but modest housing endemic to this part of the state.  There was however, a sight that caught my eye just north of the settlement:

This pyramid is actually mentioned on RoadsideAmerica.com

It had been a very windy day, all day.  It got a bit worse later in the afternoon/evening but is supposed to calm down after 8 PM.  The “fog” you see in the shot below is actually dust storms blowing by from the south.