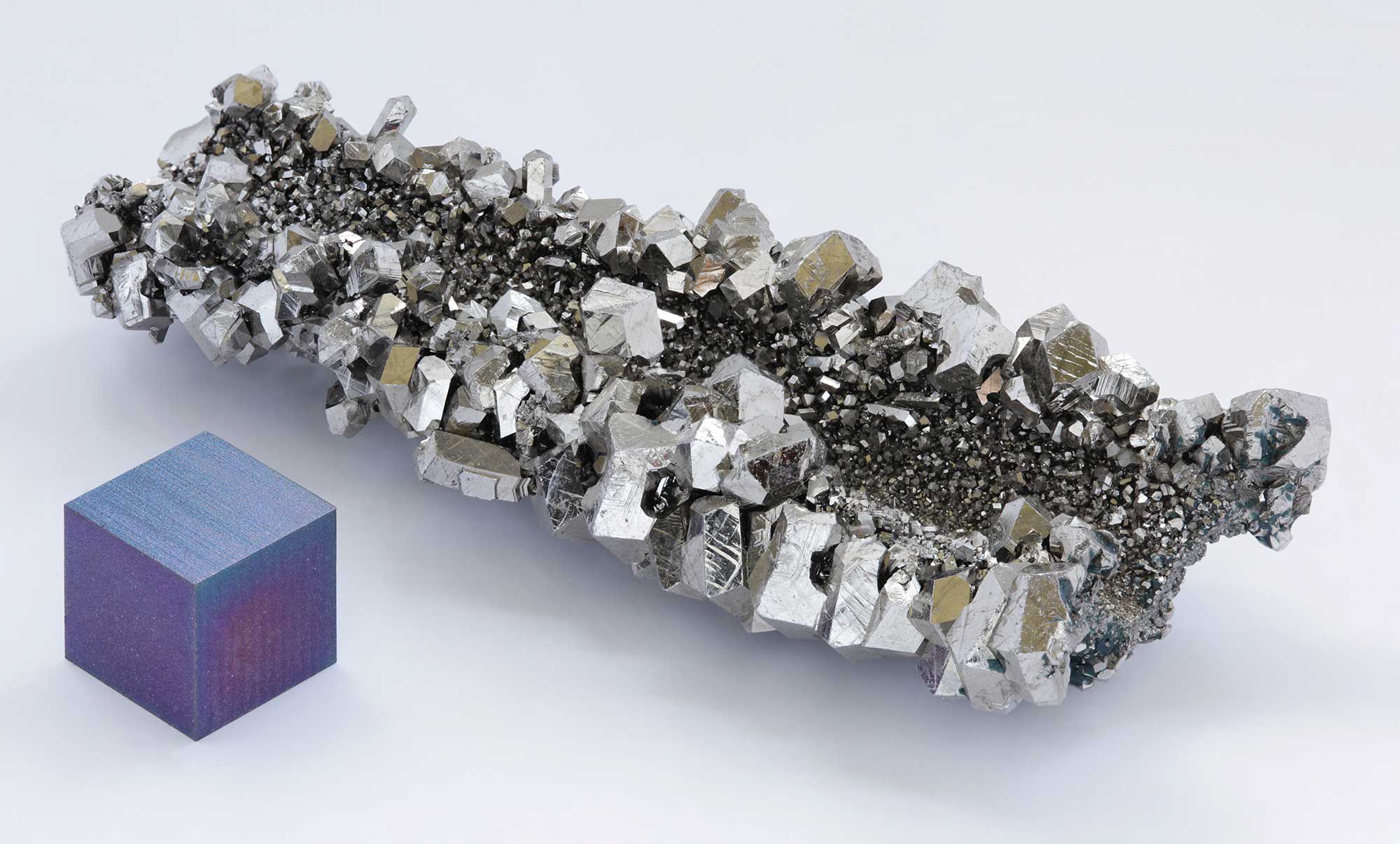 Niobium crystals next to an anodized cube of 99.95 percent pure niobium. (Alchemist-hp/Wiki Commons/)

A piece by Ron Lieback that appeared recently on the Cycle World website announced that “The Hollister, California-based motorcycle company [Lightning] is betting on new niobium technology…

“A yet-to-be-named electric motorcycle prototype is under way that will leverage the metal niobium. Lightning Motorcycles says the initiative intends to innovate and test the metal in various vehicle components, which will improve its performance and, eventually, help the bike exceed the 250-mph mark.”

I wanted to know more about how niobium could help, and have since learned some interesting things.

What Niobium Is, and What It Does

Niobium, which was at one time called columbium, is not a light metal. At a density of 8.57 grams per cubic centimeter, it is heavier than iron (7.87); but its largest application takes the form of ferroniobium, a combination with iron that enables easy alloying with around 1/10 of a percent of niobium, resulting in high-strength, low-alloy (HSLA) steels widely used in auto bodies and structures. HSLA steels save weight because greater strength makes it possible to use less material. There are far stronger specialty steel alloys available, but their high costs makes them unattractive for auto construction.

CBMM, the Brazilian niobium producer named in the article, ships thousands of tons of ferroniobium and niobium oxide annually; more on them shortly. The current price of niobium is in the range of $18–$20 per pound.

In this application, niobium strengthens steel just as vanadium did for Henry Ford’s Model T: through a mechanism called grain-boundary hardening. Metals are crystalline, meaning their atoms naturally arrange themselves into orderly ranks and rows. But metal objects in general are polycrystalline, meaning they consist of a jumble of myriad tiny crystals which are oriented randomly and separated by intergranular regions in which crystalline order is not present.

Under high stress, metal crystals yield across one row of atoms at a time as local defects, points of weakness called dislocations, propagate through them. But when moving dislocations arrive at a grain boundary, they encounter chaotic and highly strained regions that impede their progress. The more such grain boundaries a material contains, the more strongly it resists deformation. This is why fine-grained materials tend to be stronger than their coarse-grained counterparts. When added to steel in very small amounts, grain refiners such as vanadium, niobium, tantalum, and titanium all act to nucleate the formation of very great numbers of crystals as the molten metal begins to solidify. The resulting steel can be finer-grained and therefore stronger.

When added to stainless steels, niobium offers another advantage: It can help prevent the dreaded intergranular corrosion. This occurs when carbon atoms diffuse into the intergranular zones and combine with nearby chromium, a necessary constituent of stainless; this depletes the chromium from adjacent metal crystals and makes them vulnerable to intergranular corrosion. Adding a bit of niobium, which combines with carbon to form niobium carbide, can prevent chromium depletion and, in turn, such corrosion.

Niobium also finds use in the preparation of high-temperature refractory metals for use in gas turbines.

Since HSLA steels are already widely used in the auto industry, it seemed unlikely to me that they would serve as a basis for supporting a Bonneville speed-record attempt. There had to be more to the story—something new.

And there is. Niobium has a new role in the production of lithium-ion batteries. In Japan, Toshiba has, for some time now, produced so-called “LTO” (lithium titanium oxide) anodes as an important element in its Super Charge ion Battery (SCiB). Toshiba claims the SCiB is capable of 20,000 charge-discharge cycles, and of being rechargeable to 80 percent of full capacity in six minutes. The company also claims the battery retains 71 percent of its room-temperature discharge capacity at -22 degrees Fahrenheit.

When a lithium-ion battery uses the usual carbon-anode construction, the influx and outflux of lithium ions during charge-discharge causes the anode to cyclically swell. This eventually causes conductive flakes to detach from it, a major problem. Extra-fast charging accelerates this, leading to the graphite anode being plated with lithium metal. LTO is said to avoid this, and now Toshiba has taken an additional step in developing an NTO, or Niobium Titanium Oxide anode, said to considerably increase energy storage per unit of volume.

Now we’re talkin’! A denser, lighter li-ion battery would indeed be useful for anyone seeking an electric motorcycle speed record.

Brazil supplies a majority share of the world niobium market, and reserves near Araxá held by CBMM (Companhia Brasileira de Metalurgia e Mineração) are reportedly large enough to supply present world demand for 500 years! In 2011 a Chinese group took a 15-percent stake in CBMM, and a group of four Japanese and two South Korean companies bought another 15 percent, leaving the billionaire Moreira Salles family firmly in control with 70 percent. Can you say “globalization”?

In attempting a speed record at Bonneville, it would appear that CBMM and its Asian partners seek to publicize niobium’s expanding capabilities.