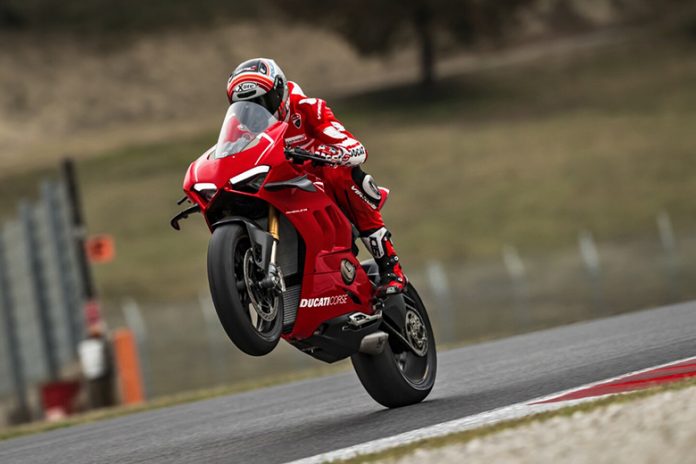 New Panigale V4 standard equipment includes Ducati Power Launch, up/down EVO shifter, a full-LED headlamp with Daytime Running Light, Sachs steering damper, rapid control selection, automated switch-off of turn signals. All of these features come as standard. A new chapter in Ducati’s heritage, a “symphony of performance and emotions” it is 100% Italian, is the name of the Panigale V4. The Ducati Panigale V4 2019 Sports Bike is the first mass-produced Ducati motorbike to include a 4-cylinder engine based on the Desmosedici MotoGP motorcycle.

The V4 Panigale, An all-new “symphony” of Italian performance and passion; the Ducati Diavel is an exciting new chapter in the Ducati story. For the first time, Ducati has put a powerful four-cylinder engine in a production sports bike, and it comes from the MotoGP Desmosedici. All of Ducati’s best attributes come together in one package. New for 2019, the Corse livery is enthused by the colors used in MotoGP and has an incredible power-to-weight ratio of 1.1 hp/kg. At 1,103 cm3, this motorcycle begins a new milestone in the supersport production bike market. 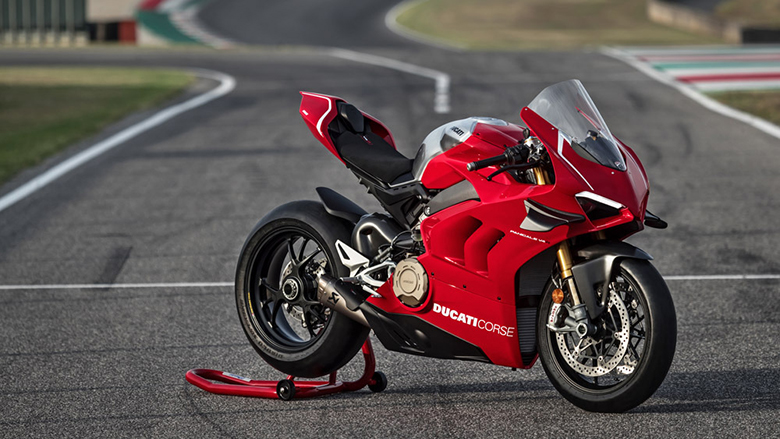 The 90-degree V4 engine configuration is regarded by Ducati as the pinnacle of motorcycle engine sporting performance, according to the firm. It’s not luck that Desmosedici MotoGP engines use the same solution. The 90-degree V arrangement automatically balances first-order forces without the need for a balancing countershaft to avoid vibration, a solution that, as is well known, adds weight and decreases power consumption. Among the frequent advantages that make this Ducati-selected design the most technically refined feasible, this critical benefit is vital for the dependability and mechanical efficiency of an engine that can rev as high as 14,000 rpm.

With the V configuration, the bike’s frontal cross-section is reduced since the bike’s lateral compactness allows for more excellent mass centralization. In addition, the overall gyroscopic effect is reduced by the shorter crankshaft. Combined, these factors improve the motorcycle’s dynamics, making it lighter and quicker to change direction. The Desmosedici Stradale can breathe more accessible because of the airbox’s 12.8-liter capacity and the water pump’s ample area within the V.

The core of every Ducati is a well-integrated engine and chassis set-up. To mimic the Ducati MotoGP engines, the Desmosedici Stradale has been built to be banked back 42 degrees. The swingarm pivot is as far in front as feasible; this increases weight distribution and frees up space for more oversized radiators.

Furthermore, the Desmosedici Stradale is a physical component of the chassis. The upper crankcase half and rear cylinder bank heads have been used as primary connection points for the frame. In addition, the crankcase serves as a swingarm connection point for the rear suspension.

Despite being approximately 2.2 kg heavier than the 1,285cc Superquadro twin, the Desmosedici Stradale demonstrates the commitment to the lightness at the core of every Ducati project.

Gravity-die-cast aluminum engine cases are linked horizontally and constructed as a single unit. The four Nikasil-coated aluminum cylinder linings are incorporated into the upper crankcase half, guaranteeing wear prevention and reduced friction. 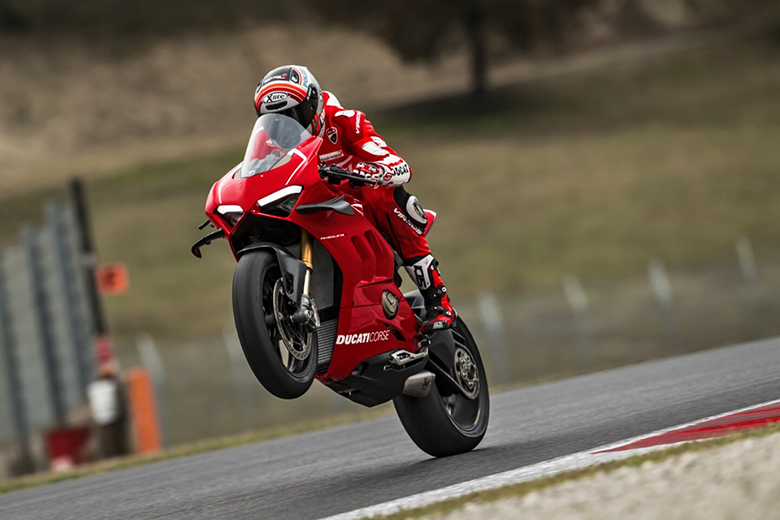 Two low-attrition compression rings and an oil ring are fitted to the 81 mm diameter pistons that slide into the liners. A “box in a box” approach decreases attrition and inertial stresses while retaining the piston’s requisite strength and stiffness. The pistons are made of molded aluminum.

A 14:1 compression ratio further emphasizes the racing-inspired appearance. Forged steel con rods including a center-to-center distance of 101.8mm, connect the pistons to the crankshaft.

On the powerful Desmosedici engines used in MotoGP, the crankshaft is attached to brass bushings and spins on three supports. It is composed of nitrated steel including crankpins ground twice and offset at 70 degrees.

Because of the V-engine configuration and the unique shape of the shaft, a peculiar ignition sequence is known as “Twin Pulse” is possible. Magnesium die-cast engine casings are used to save weight. In addition to the two-piece clutch cover, the cam covers, oil sump, and alternator cover are all made of the same material.

The new water pump in the engine ‘V’ is driven by a gear train that drives a shaft. Reduce circuit size, increase efficiency and reduce engine weight with this positioning solution.

General service intervals remain unaltered at 12months/12,000 kilometers, despite the car’s performance surpassing even that of the Superquadro. The valve clearance examination and adjustment (Desmo Service) frequency continues at 24,000 kilometers (15,000 miles) (7,500 miles).

Big Piston Forks (BPF) with fully adjustable spring pre-load and compression and rebound damping is standard on the Panigale V4. With Brembo radial caliper mountings on the fork bodies, chrome sliders are housed. The front-end setup is equipped with a Sachs steering damper. A forged aluminum piece attaches the Sachs rear shock to the Desmosedici Stradale.

NIX-30 forks, a TTX36 rear shock and an event-based control system on the Panigale V4 S and V4 Speciale models. The second-generation control system Ohlins Smart EC 2.0, which includes the new Objective Based Tuning Interface, manages the suspension and steering damper in these models (OBTi). 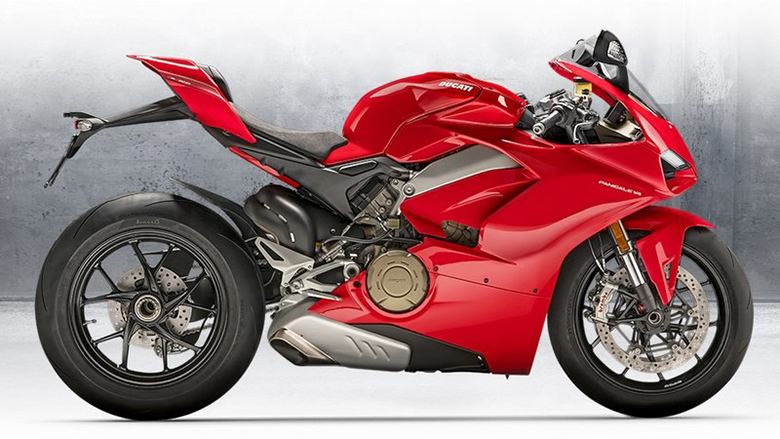 Pirelli and Ducati created the new Panigale V4, the first motorbike equipped with the groundbreaking Pirelli DIABLOTM Supercorsa SP 120/70 ZR17 tires upfront the standard size 200/60 ZR 17 tires up back as standard equipment. DIABLO Supercorsa SP in the 200/60 ZR 17 size is the first race replica tire of its kind and is already popular in the FIM World Superbike Championship.

Its innovative profile maximizes the contact patch at extreme lean angles and takes full advantage of the bi-compound technology used: The new SC2 compound used for the shoulder area is the same as that used for racing slick products, ensuring enhanced grip guaranteeing the strength and versatility required for road use. The front tire underwent an additional, major development step to work in perfect harmony with the rear tire: all riding items related to handling, from rider feedback through support solidity to safety feeling and grip loss predictability, have been optimized by creating a new front profile, slightly increased in terms of maximum section width compared to the previous version of the product. 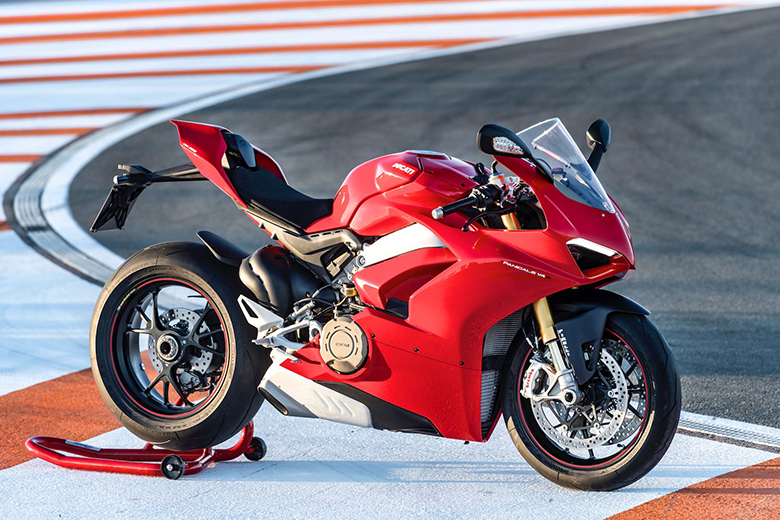