One event that we have been paying very close attention to here at West Chevrolet of Knoxville is the world-famous Barrett-Jackson Collector Car Auction. The auction runs from January 22nd through the 30th. There’s a very special highlight this year, as the official auction of the world’s first 2023 Chevy Corvette Z06 will take place here. This car with the VIN number 001 is being sold to raise money for Operation Homefront- a non-profit dedicated to helping hard-working military families.

The 2023 Z06 has a striking appearance, sound, and a track-ready handling experience. Its 5.5-liter LT6 is the highest-horsepower naturally aspirated V8 to hit the market, with its flat-plane crank design that generates an exhilarating 670 hp. Almost every single exterior detail that the Z06 exhibits as serves a purpose for hardcore aerodynamics and handling or cooling, with styling elements that do a fantastic job of complementing the car’s intense, rapid motion. This “floating design” was key to the very precise tuning that helped with the delivery of said exhaust note. The Z06 has a driver-focused cockpit, with carbon-fiber trim that complements the car’s very track-focused and lightweight persona. You can pick from 12 available exterior colors, seven interior colors, and seven available wheel packages, making this the most overall adjustable Corvette yet! January 29 is the expected date for this new Z06. The proceeds will be going to Operation Homefront, an organization that helps military families overcome short-term problems that stand in the way of being sustainable in the long run.

Barrett-Jackson has helped raise more than $135 million to date! The auction company is honored to set the stage for another memorable period in automotive history with proceeds from this original charity Z06 going to Operation Homefront. Known for years for continuing to build military families up with stability, Operation Homefront has done very well at securing military families, in hopes to lift them up to their highest potential in communities they have long protected. 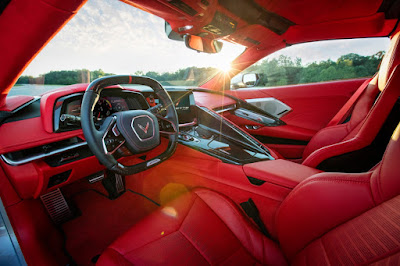 The first 2020 Corvette Stingray that was featured at a Barrett-Jackson auction raised an astonishing $3 million, sold to prominent figure Rick Hendrick. The moment he made the bid he was planted right next to former NASCAR champion and Hall of Famer Jeff Gordon, with the beneficiary being the Detroit Children’s Fund. You can also do yourself the favor of hearing the 2023 Z06 roar, with the key to its sound and performance capability being its very lightweight, low inertia rotating assembly. The LT6 is hand-assembled by master engine builders at the proudly all-American Bowling Green Assembly plant within the legendary Performance Build Center.