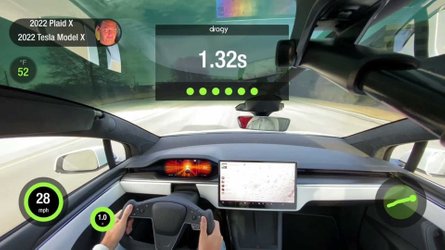 Tesla has proven that electric vehicles are incredibly quick, and now many other automakers are following suit. Forget the days of small, polarizing, thrifty, and unexciting EVs. The Tesla Model X Plaid is proof that even a large and heavy family hauler can outmatch supercars with its crazy acceleration.

It wasn’t very long ago that most EVs were not very accommodating, especially for larger families. Moreover, while their performance was impressive to many folks in the industry, most early EVs can’t stand up to the high-performance electric cars and SUVs arriving today.

The Tesla Model X is one of few electric vehicles with seating for six people in three rows, no to mention loads of room for cargo. Aside from the smaller Model Y, with its optional, cramped third row, the only other three-row EV on the market is the Rivian R1S. Regardless, now that larger electric SUVs and electric pickup trucks are coming to market, it’s working to prove that electrification won’t just be reserved for practical commuter cars like the compliance EVs of yesterday.

In this recent video, which was produced by CCP Shorts and shared on Instagram by DragTimes, we get to watch a Tesla Model X Plaid cover a quarter-mile pass in a ridiculous 9.83 seconds at 146.68 mph. As you can see, the Model X rockets from zero to 60 mph in just 2.74 seconds, which, while impressive, isn’t as commanding as the Plaid’s quarter-mile time.

According to Tesla, the tri-motor all-wheel-drive Model X Plaid produces 1,020 horsepower and can accelerate from zero to 60 mph in as little as 2.5 seconds. Tesla also pins the range-topping Model X’s quarter-mile time at 9.9 seconds.

The run in the video was reportedly performed on a normal road and recorded with a Dragy device. It comes as no surprise that the Model X Plaid didn’t hit that 2.5-second 0-60 time. As we’ve previously shared regarding the Model S Plaid, pulling of the manufacturer’s official time requires absolutely ideal conditions, and it includes rollout.

As far as the quarter-mile time is concerned, the Model S Plaid has proven that it can meet or beat Tesla’s official time in real-world runs, so it seems the Model X Plaid should be able to do the same. However, it’s arguably much more impressive to learn that a hulking SUV is so capable.

Our friends at Teslarati have pointed out that the Model X Plaid’s quarter-mile time is significantly better than that of the Ford GT supercar, which has two seats, no cargo space, and a $500,000 starting price. According to Car and Driver, the 2022 Ford GT pulled off a 3-second 0-60 mph run and standard quarter-mile run in 10.8 seconds at 134 mph.

Sadly, Tesla is having plenty of problems filling orders for the refreshed Model X. CEO Elon Musk recently admitted that Tesla dropped the ball and is still catching up. Nonetheless, the Model X Plaid is available to order on Tesla’s website with a starting price of $126,490.