After a stellar production run with the Countach, Lamborghini had finally found its niche. The largely positive response over the long production run spoke volumes about what supercar buyers were looking for at the time. The company’s fate was sealed, and it was abundantly clear the right way forward was to keep making such fire-breathing V12 monsters, a philosophy the brand would follow until now. Now, all Lamborghini had to do was to take what it had learned with the Countach and develop a better, more refined, and basically superior supercar.

Sounds pretty simple, eh? Maybe not so much — but let’s see about that.

Ever since Ferruccio Lamborghini gave up the brand’s control back in 1972, things were never the same at Sant’Agata Bolognese. Indeed, the Italian carmaker changed quite a few hands before ending up in the ownership of the Chrysler Corporation in 1987, around the same time the new flagship V12 supercar was under development. And while previous owners had given Lamborghini engineers carte blanche for developing new cars, that was unfortunately not the case for this American manufacturer. But hey, there isn’t a lot to complain about here since the very idea of a Lamborghini supercar wasn’t tampered with (for the most part). 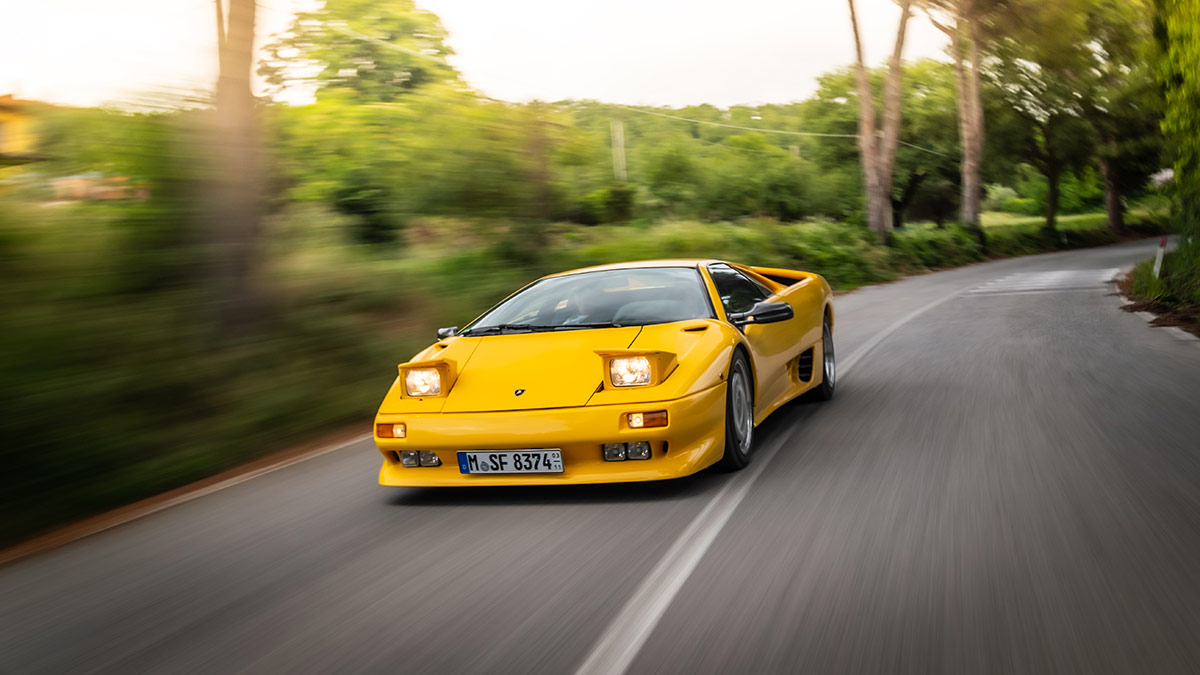 Mr. Lamborghini may have sold the company in 1972, he was very much the boss until late 1974 when he finally retired. However, several prominent Lamborghini officials left the company in the following years and were replaced by new ones. For instance, Valentino Balboni competently replaced chief test driver Bob Wallace, but the chief engineer position left vacant after Paolo Stanzani resigned was never occupied by a man of the same caliber. Nonetheless, the show had to go on, and it did when Lamborghini launched the Diablo in 1990, succeeding to the legendary Countach.

The Countach was in production for more than 15 years; during that time, it made quite the impression among potential buyers and countless teenage boys with a passion for cars. In other words, the Diablo had some pretty big shoes to fill, and the boffins at Automobili Lamborghini had their work cut out for them.

Since Chrysler undertook the Diablo project’s development, Lamborghini engineers now had specific requirements to adhere to. The new management had a precise vision for the Countach successor. The Italian brand had been working on a replacement since 1985, and the sudden change in ownership came with tight scrutiny on all Diablo-related activities. Moreover, Lamborghini was in deep and grueling financial turmoil at the time, so the once fearless and belligerent raging bull had to be tamed to keep the money river flowing.

Naturally, everyone, including the Chrysler Corporation, wanted the new car to be significantly more powerful; Lamborghini engineers had to achieve a minimum top speed of 315 km/h or 196 mph. The main reason was to ensure the Diablo wouldn’t fall behind other high-end supercars. However, it wasn’t all about top speed this time around; Lamborghini also prioritized driving dynamics and high-speed handling. 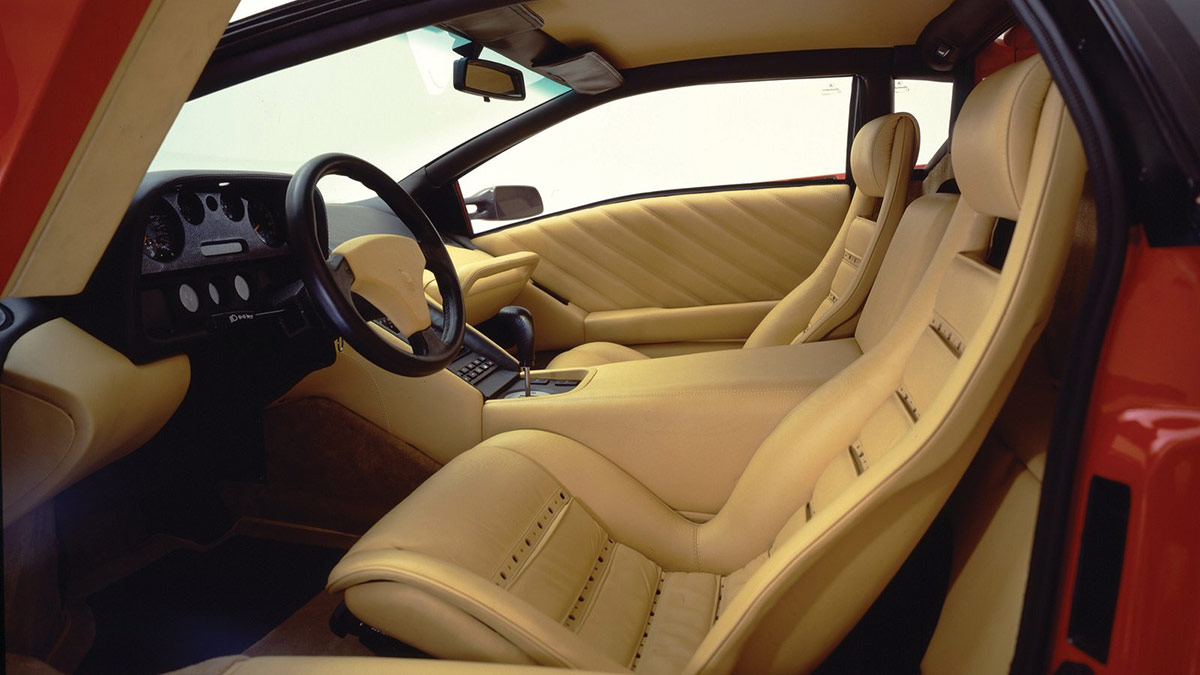 Thankfully, Chrysler mostly limited the interference to trivial aspects, and what had made the success of the Lamborghini formula work until now wasn’t tampered with. For example, the long-standing tradition of naming new cars after successful fighting bulls remained. Notably, Diablo, a formidable 19th-century bull, was chosen for the task.

As mentioned earlier, Lamborghini started working on the Countach’s successor around June 1985. The project was initially codenamed 132 before its official name was granted a little later. After nearly five years of intense development riddled with temporary setbacks, the brand-new flagship Lamborghini finally went on sale in 1990.

With the Diablo, Lamborghini started its now-famous tradition of launching a new model every few years in addition to endless special edition models; but I doubt anyone is complaining. 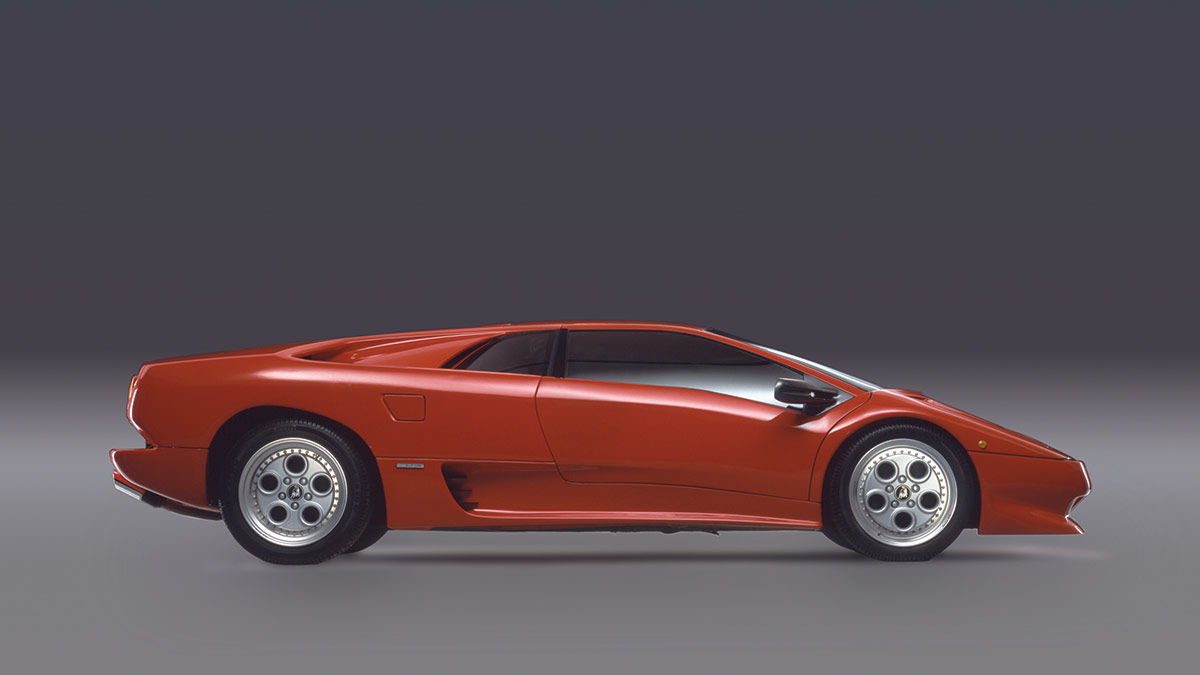 The first model launched on 21 January 1990 was called the Diablo and came with a base price tag of approximately $239,000, followed by an updated VT model in 1993. The new supercar came with several cosmetic and technical upgrades, the most prominent of which was a new viscous center differential. Also unveiled in 1993 was the limited edition Diablo SE30, a racecar for the road launched to commemorate Lamborghini’s 30th anniversary, of which only about 150 were produced. Of those, approximately 30 are believed to have been converted to Jota-spec models from the factory, a stripped-out, no-nonsense racecar designed for valued customers who wanted to enter the FIA GT racing series.

The Diablo featured the same Bizzarrini V12 engine as its predecessors — the Countach and the Miura. Only this time, the engineering team aimed to extract as much power as possible. The first Diablo variant came with a 5707cc power unit with an advanced dual-overhead-camshaft setup. It also featured impressive modern tech, like a sophisticated electronic sequential multi-point fuel injection system and four valves per cylinder.

The new engine sent 485 hp and 428 lb-ft of torque to the rear wheels using a 5-speed manual transmission, good enough to send the Diablo from 0 to 62 mph in about 4 seconds. Besides, the claimed top speed was 204 mph (328 km/h), well above Chrysler’s initial target. 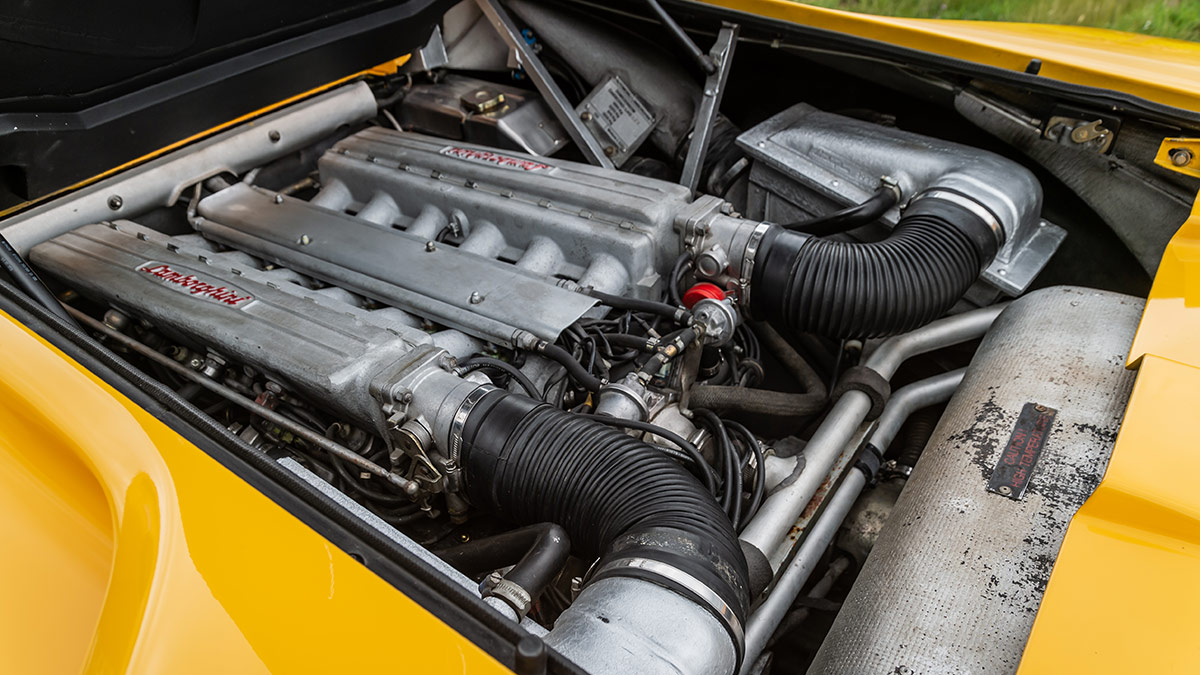 As great as the first Diablo was, it also lacked certain features like an all-wheel-drive system and even power steering. The Diablo VT was designed to fix these minor inconveniences and offer a much better overall package to attract even more potential customers. Power and torque figures remained pretty much the same, although the 5.7-liter engine was tweaked a bit for added refinement, including a better timing system, redesigned air intakes, and a new engine cover.

You could also get four-wheel drive, significantly improving high-speed handling characteristics by sending as much as 25% torque to the front axle in case of lack of grip at the rear. The system used a viscous center differential from the LM002 truck to make torque vectoring possible. Furthermore, both cars used high-performance Brembo ventilated disc brakes on all four wheels, albeit the VT model came with four-piston units instead of the two-piston calipers of the base variant.

Furthermore, the fully-independent suspension system used a parallelogram-style configuration with unequal-length wishbones and a dedicated anti-roll bar, contributing to the agile handling. The newer VT variant came with electronic active suspension control, either automatically using the onboard computer or manually choosing between four settings. 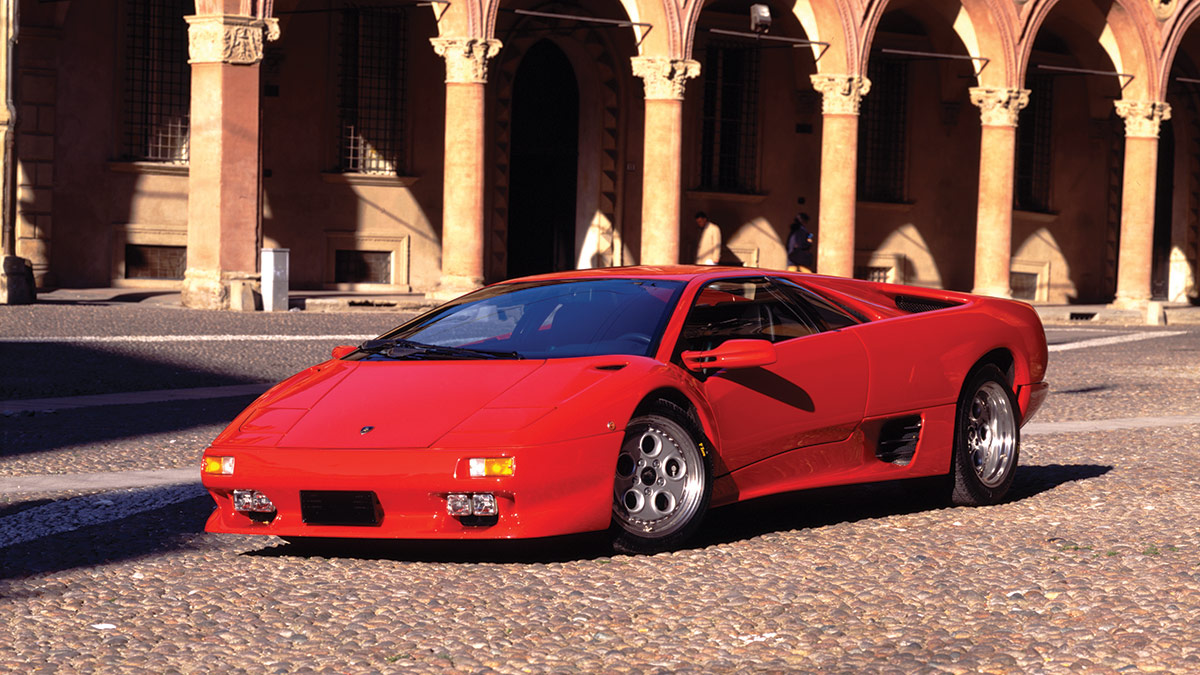 The regular Diablo and the VT variant may have been similar in many ways, but the SE30 special edition was worlds apart, inside and out. It came with the familiar 5.7-liter power unit, but the similarities ended there. Notably, Lamborghini made several modifications to reflect the car’s hardcore track-ready nature, and as such, used magnesium for the intake manifolds and cylinder heads, developed a new free-flowing exhaust system, and the electronic fuel injection system was tweaked.

All these changes resulted in a 40 hp increase in power, which, when combined with the 275 lbs. drop in weight, dramatically improved the performance. But if you look at the SE30 and think, “hmmm…you know what this thing needs, more power,” then Lamborghini has got you covered — the SE30 Jota conversion kit tuned the regular engine up to nearly 600 hp.

It’s important to mention that it wasn’t quite business as usual at the Lamborghini factory styling department when the Diablo was in development. And while, yes, Marcello Gandini was again tasked with designing the new car, unlike the previous time, his design wasn’t accepted — Chrysler Corp. wanted to make the car less “pointy.”

As a result, they took Gandini’s design back to Detroit and had their own guys take a jab at making the car look a bit more civilized. However, Gandini was accustomed to being awarded carte blanche during the Ferruccio Lamborghini era, and naturally, he didn’t take the newfound scrutiny that well. The Italian designer was so disappointed that he collaborated with a famous engineer and launched a new supercar based on his original design: the Cizeta-Moroder V16T.

That being said, even after Chrysler’s tampering, the Diablo is still one of the finest-looking Lamborghinis of all time. Sure, it wasn’t as aggressive as the Countach, but the Diablo still looks like it goes a million miles an hour while standing still. 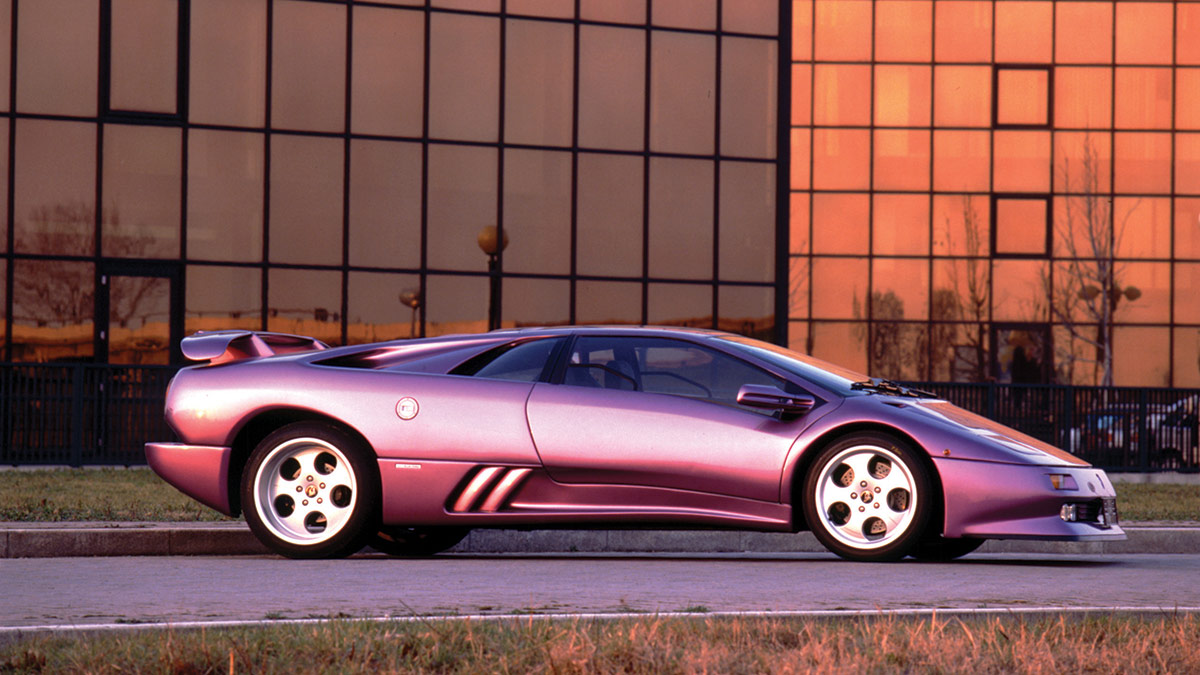 The famous “wedge shape” coined by the Countach was further perfected and now cemented as an integral part of the Lamborghini ethos. In the Diablo, the flagship design was taken one step further by a body that not only looked good but also designed with aerodynamics in mind. Each specific variant came with subtle design modifications to the front fascia and bumpers. For example, the VT featured air intakes below the front headlamps, while the SE30 came with straked openings starting from the centerline. However, the interior is where the SE30 stood out from the rest, with a completely stripped-out racing configuration to shave every ounce possible.

Like the Countach, the Diablo also came with an alloy steel spaceframe chassis and lightweight aluminum bodywork. However, due to its larger size, the Diablo was approximately 250 lbs. heavier than its predecessor.

Lamborghini launched the Diablo Super Veloce (SV) at the 1995 Geneva Motor Show, as a race-focused variant based on the standard rear-wheel-drive car. The SV clearly drew significant inspiration from the limited edition SE30 model, as made evident by the rear light cluster placement and the same engine lid. Despite being slightly cheaper than the standard Diablo, the SV got a slight power bump taking the final output to 510 hp. It may not sound like much, but the SV was nearly half a second quicker to 60 mph than the base model, thanks to elaborate weight-saving measures. 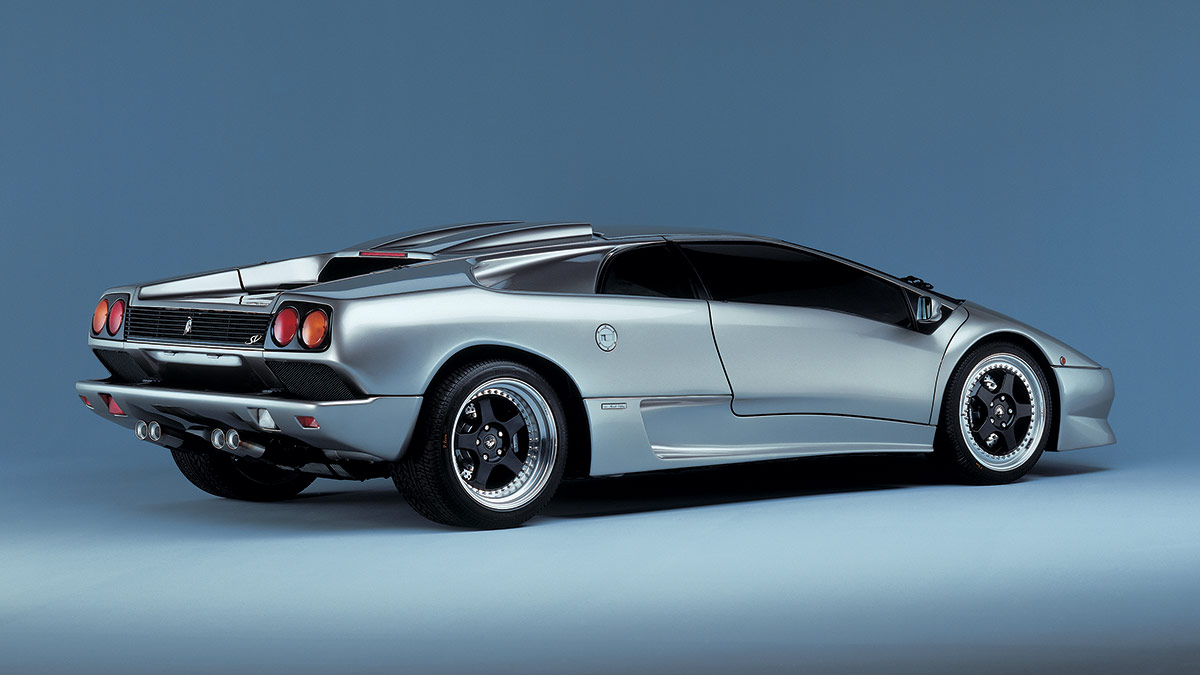 Around 1998, the entire Diablo lineup received a major facelift, and the base model was discontinued. The old SV was replaced by a newer series 2 model, which served as the Diablo range’s entry-level trim. The update came with fixed headlights and a more powerful engine across the board.

In 1995, Lamborghini presented the Diablo VT Roadster after toying with the idea of an open-top supercar with a concept Roadster model in 1992. As the name suggests, this car was based on the VT model and featured extensive modifications to the engine lid to accommodate the electronic roof mechanism, adding slightly over 100 lbs. compared to the regular VT. Other changes included slight improvements to the cooling ducts and new 17” wheels. 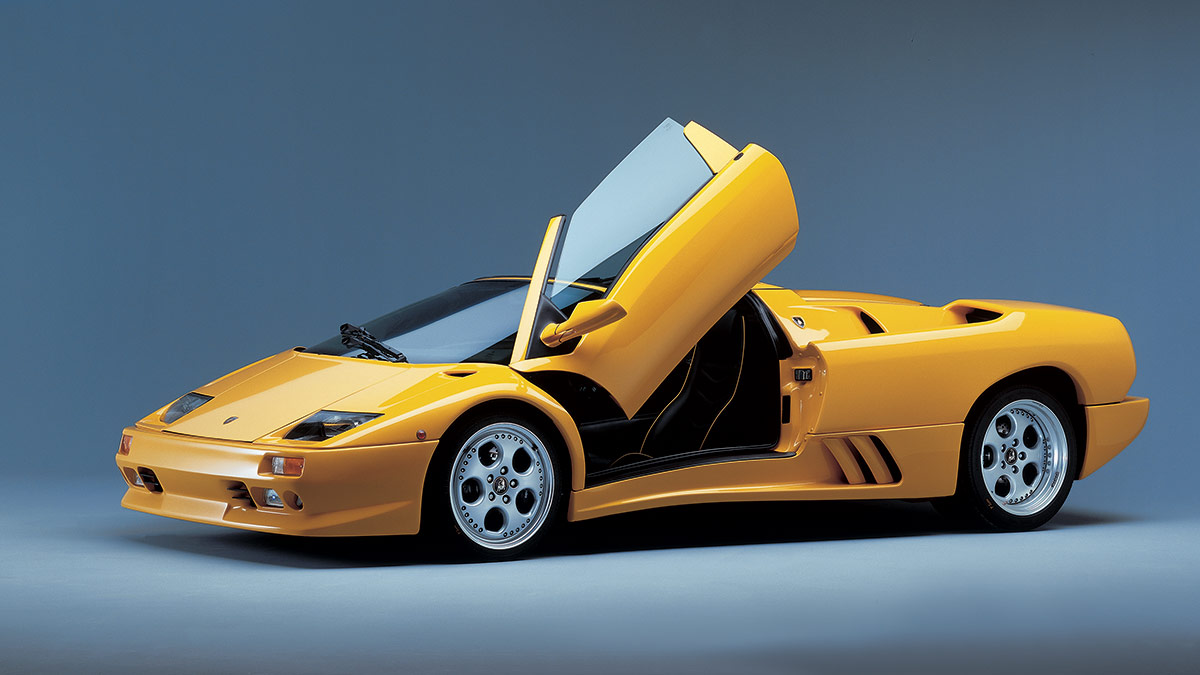 Like the Diablo SV, the VT and VT Roadster models also got a major update in 1998. The new cars produced 529 hp and now came with an Anti-lock Braking System as standard. Such a significant bump in power also increased the top speed to 208 mph. Other changes were similar to all second-generation cars, like the permanent headlamps and larger 18″ wheels to make room for larger brakes.

With the Diablo, Lamborghini seems to have been carried away by the potential monetary benefits of creating special editions or one-off models. Sure, the Countach also had its fair share, but nearly 20 special projects were derived from the Diablo (of course, it’s impossible to cover them all in a single article, so don’t hesitate to let us know in the comments which one you’d like us to cover next).

While the Diablo may not have been as instrumental as the Countach in Lamborghini’s history, it certainly deserves to be acknowledged. No need to say that it begs the question, “Was Chrysler’s softened design to blame for the Diablo failing to get the public’s attention it deserved?” In any case, nobody can deny its role in establishing the Lamborghini brand as a maker of hardcore supercars with monstrous V12 engines attached to the back — and it was just the beginning.

Huracán Tecnica – The Making Of