I woke this morning, at site 74, feeling rather cold.

I checked the weather app and the surrounding area was reporting low to mid 30s!

It was then I remembered the fact that cold settles to the lowest point.  I’d forgotten that, and had camped next to an old stream bed which of course makes it the low point for the surrounding terrain of the campsite!  Doh.

I decided to do a hasty displacement to site 73 before someone else occupied it. (It is apparently popular with day users and their trailered ATVs)

Got everything packed up but couldn’t get Scarlett started!  To make matters worse, the starter decided that today was the day it would quit even working intermittently.  The starter had been going downhill over the last few weeks and I’d been meaning to unmount it to clean it.  I was now paying the price.

I couldn’t get Scarlett started through the kick starter either!  I’m thinking it was just too cold, and apparently fuel-injected engines don’t start as easy in the cold as do carbureted engines.  (This was a comment made by RichardM when I later discussed things with him).

So, I was burning daylight, and decided to leave the rig and take everything else over to the new site.  It’s good that I did because as soon as I put it into park within site 73, a truck came by dragging a trailer with two ATVs on it!  The driver gave me a long look as he was forced to go find somewhere else.  Hah!

Leaving the rig, I walked the two miles back to Site 74, the exercise serving to warm me up.  More kick starting and attempts to get the starter to work via wishful thinking failed.  Then I decided to try and bump start the rig by pushing her up to speed in a very slight downhill grade just off the entrance to the campsite.

Well, it took four attempts, each time with me dragging the rig back up to the top of the hill, before the engine caught!  Once started, I rode her the two miles to site 73 and shut her down. (Definitely got my cardio workout this morning!)

Got camp set up and ate breakfast, then tackled the cleaning of the starter.

Unmounting the starter wasn’t a big deal, taking it apart was a bit dicey the first time but no real issues.  As you can see, it was a bit dirty. 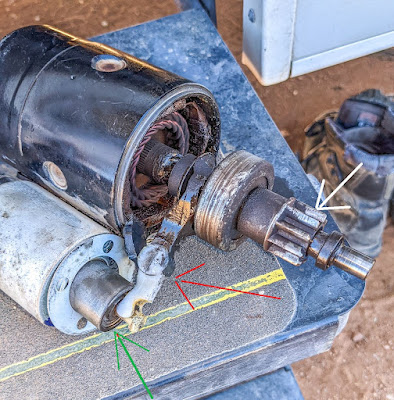 After I cleaned things up, I mounted the starter back up and got nothing.  Just spinning noise from the starter motor.  Dammit.  Took it back off, cleaned some more and then realized I’d installed the white plastic lever above upside down. (red arrow above)

So, got it back together, and hooked up the starter to the VRRV’s coach battery and tested it.  I could see the Bendix Pinion Gear  (white arrow above) spinning up to the top as designed before dropping back down.  Yay I thought.

Got it mounted again.  It rattled the first time, like when the pinion gear wasn’t going up to engage the flywheel’s teeth.  The second attempt resulted in engagement and start!  Yay, I again thought.

Buttoned things up, went to test and got nothing, just the death rattle.  Dammit.

Did more research, thought some more, and saw that sometimes a weak battery can cause the solenoid (green arrow above) to not push strongly enough on the plastic lever which pushes the Bendix Pinion gear assembly up to meet the flywheel’s teeth.  The voltmeter I put on the battery reported 11.89 volts so it was dead from all the previous cranking attempts.

So, a couple of hours later, I had recharged the battery via the small generator I carry with the VRRV and damn if it didn’t start working more reliably!  There’s a pattern emerging (I went for a test ride with multiple stops), first I hear the starter motor spinning but no engagement.  Second button push results in a clean start!  It did this each of the times I shut it off then started it back up again after a short interval.  Weird.  But, it’s enough for me to declare victory and see how things go.

So, that’s how I spent Super Bowl Sunday.  I will say, the new site is much nicer in terms of views eh?  I hope, it being at a higher elevation than site 74, that I’ll wake to expected low temperature not something almost 10 degrees colder!

Happy V.D.!  Valentine’s Day that is.

Another great warm day here in southern Arizona, the temperature got up to 78°F (25.5°C) and it felt pretty good.

I went riding on Scarlett, just to check out the roads to the west and north of my present campsite.  Found a couple of campsites, noted them in google maps for future reference.

The towering presence that is Baboquivari Peak made itself known as I rode along:

Here’s shots of the couple of campsites I found on state land (possibly private land which has granted public access, kind of like parts of the Santa Margarita Ranch where I camped last week).

Before I took the above shot, I encountered an issue with Scarlett when I went to start her up.  No power, nothing, nada, no lights, no fuel pump….dammit.

I of course went down the wrong rabbit hole, thinking it was a problem with the ignition lock assembly.  It’s been giving me issues for quite a while now, I really should get around to installing the replacement unit I bought oh so long ago.

I had removed the seat, thinking perhaps to check the three relays underneath when I realized I left the multimeter in the VRRV!  Then I thought to hotwire the rig to get it going but attaching a wire with alligator clips on both ends to the battery and what I thought was the ignition wire at the lock failed.  Hmmm.

I called up RichardM, and he patiently (as always) walked me through the troubleshooting process. He keyed on the fact I wasn’t getting a spark when using the alligator clipped lead wire….he had me check the cables at the battery.

I found both connected as expected but a tad loose, especially the negative side.  Hmmm.  I tightened them both down and damn if that didn’t restore power.  Doesn’t take much looseness apparently!  Yay.  I thanked RichardM and proceeded to button up the rig.

Got back to the VRRV and spent the rest of the afternoon, resting and reading….with some minor chores thrown in.

Here’s a pic of the two arrows I found at each of the two campsites that I recorded on google maps.  Weird that people left them in the fire circles eh? 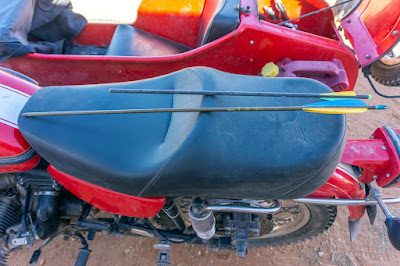 Towards late afternoon, I packed all the outside items to include both motorcycles.  The plan is to move towards Why, AZ tomorrow.  Its forecast to be a windy day so a good time to move, especially since a little rain is expected for the BANWR on Wednesday.

14 nights here in the BANWR area, and my onboard fresh water tank lasted me till yesterday!  Not bad.