India has one of the largest railroad networks in the world. Naturally, there are hundreds of crossings spread across the country and only a few of them are unmanned. But the number of accidents on these railway crossings remain alarming. Why so? Well, the CCTV footage below shows a perfect example.

The CCTV footage is posted by Sonu Pujari in HVK Forum. In the video, we can see that the barricades are down but there are still plenty of people moving on the crossing.

A person enters the crossing on his bike and darted across trying to cross before the train. However, the biker slips and falls on the track. The rider somehow managed to get away from the motorcycle. The high-speed train crashed the two-wheeler completely. The man got from the spot and walked away without any sign of injuries.

The train seems to be a high-speed Rajdhani, which is one of the fastest trains in the country. Maybe that is why the man could not judge the speed of the train. However, it is criminal to enter a crossing after the barricades are down.

Losing patience on the road is one of the primary reasons for accidents. The video shows many trying to reach the other side of the track before the train arrives. There are bikers and pedestrians who are equally enthusiastic to cross the railway track and reach the opposite side.

The video shows that the train takes exactly a few seconds to pass through the crossing. Only for a matter of a few seconds, the person put himself and many around him in danger. 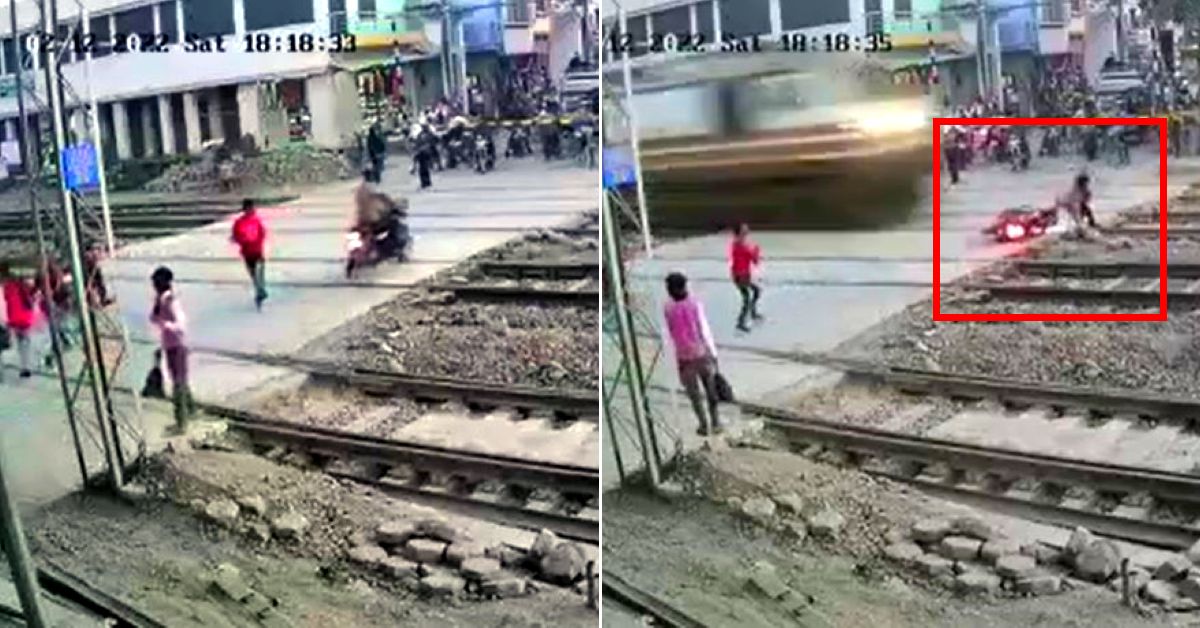 It means almost all the crossings have a person who raises and lowers the barricades whenever a train is on its way. However, it is not enough as people still try to cross the track even after the gates close down. Since trains are extremely heavy and take a long distance to slow down, they simply cannot reduce speeds when they see an obstacle or a person on the track ahead.

This is why it is always advisable to stop and let the train pass. Most of them take less than a minute. If you lose balance and fall down or get stuck in front of a speeding train, there are almost no chances of you getting away from the situation. The government and the railway authorities have made many overbridges to overcome this problem. However, it does not seem enough at the moment.