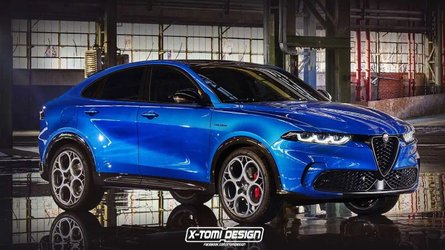 It’s only been a few days since Alfa Romeo launched the Tonale. But that hasn’t stopped automotive renderers from firing up their Photoshop and coming up with different styles for the compact crossover. For instance, X-Tomi Design made an unofficial (and convincing) version of the Tonale GTA the day after the baby Alfa crossover made its global premiere.

X-Tomi Design is at it again with the Tonale. But this time, it’s the back end that gets digitally altered. For this render, the Tonale transformed into a crossover coupe. The digital designer did more than pinch the D-pillar and called it a day. The treatment is similar to BMW’s style for X4 or Mercedes-Benz for the GLC Coupe.

The rear section is more rakishly angled compared to similarly-sized coupe crossovers such as the BMW X2 and Mercedes-Benz GLA. Its rear windows go downwards instead of kicking upwards, and a neat little tail suggests an outline that looks more car-like than a crossover. Whether it’s a good-looking piece of design or not is up to the viewer, but it’s an interesting take nonetheless.

These days, nearly every luxury automaker has a coupe crossover in its line-up. What started as a niche has become strong sellers for some of these brands. That’s despite the criticism leveled towards these vehicles. It also reached the point wherein the manufacturers have one for almost every class.

With that in mind, does this mean Alfa Romeo will consider a coupe version of the Tonale? At the moment, the Italian automaker did not mention plans for any model expansions for its latest product. That said, it did confirm that a high-performance Quadrifoglio version is under consideration. Alfa Romeo says it will announce its decision before the end of the year.