While eating breakfast I saw what looked like fog initially off in the distance; a closer look said it was part of the local prairie on fire!

It turned out to be a series of controlled burns conduced under the auspices of the US Fish and Wildlife service I believe.  I saw the fire crews along the side of Highway 286 when I later on rode Scarlett to Arivaca.

The errand in Arivaca was the retrieval of two packages from Amazon.  They’d been shipped via UPS but the postal clerk gave me no hassle when I picked them up.  I’ve run into a couple of postmasters/clerks you see, in other towns and other times, who had minor issues with me using General Delivery services for non-USPS packages.

On the way back to the campsite, after filling up the spare gas can at the Arivaca General Store’s gas station, I stopped Scarlett for this view of the controlled burns: 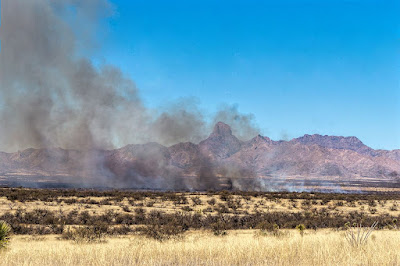 Quite a lot of smoke eh?  Glad the fire crews were around to manage the fires.

I cruised on down to Sasabe again, this time on Yagi, my Yamaha TW200 Dual Sport.  The objective was to get to that steep looking hill I’d seen to the west of the Border Patrol/Customs Station and see if it was climbable by Yagi.

It “looked” doable as I neared it.  Here was a view of it on the last flat spot before the actual hill: 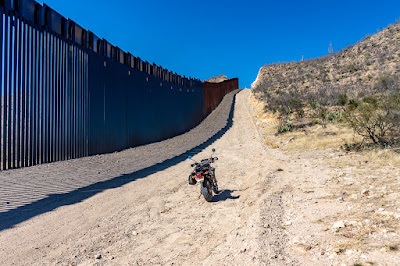 I made sure Yagi was in first gear and slowly headed up.  I could feel the rear tire wanting to kick loose when I rode over the larger stones on the road but nothing major.  I did slide up a bit on the seat to put more pressure on the front tire, but not sure that made any difference really.

Got to the top with no problems!  I had though it was just one hill and then one would descend onto the Tohono O’odham Reservation but no, there were two more steep hills that I could see: 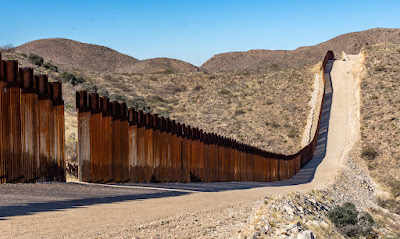 I stopped, turned around and parked Yagi for pictures.  As I did, a K9 Unit Border Patrol truck cruised by me, the driver waved, and kept going.  You can see him at the top of the next westward hill, monitoring me apparently.

Here’s what it looked like going back the way I’d come: 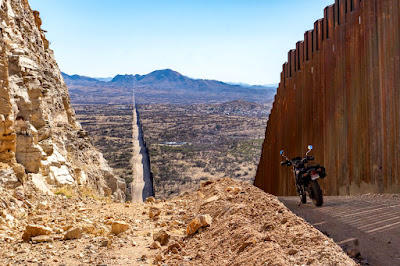 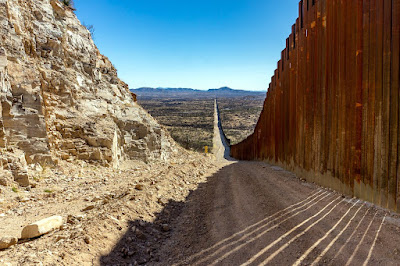 First gear of course, and with some ever so slight one-fingered action on the front brake initially.  Once I got over my nervousness, I quit using even that little bit of braking action and just relied on Yagi’s engine braking to get me down safely!

The eastward Border Patrol agent then came up to me as I stopped for pictures.  We had a nice conversation after he ascertained why I was there.  “We don’t get too many motorcycles around here” he said.  🙂

He also mentioned it was good that I turned around when I did, apparently the hill climb two hills over was difficult even for their trucks!

It was a broad range of topics, and he was courteous and professional throughout, a very good experience!  I asked him about the big gaps in the wall.  His theory, nothing official you see, was that those particular gaps I’d seen before had required the approval of the Army Corps of Engineers due to their being on top of creek beds.  Apparently, according to the agent, the COE didn’t get around to it and then another administration came into office and funds went away.  Not surprising eh?

Anyways, after a rather lengthy chat, I shook his hand and we parted ways.  I rode a bit on the dirt trails near the Rancho de la Osa trying to find the back way to the ranch.  I failed to do so and kept running into some rather steep and very rocky paths; and since I’d pushed my luck today about as far as I wanted to, gave up on that and headed back north. 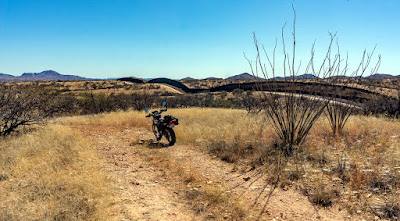 I stopped by the BANWR visitor center, then rode on over to Lake Aguirre only to find it dry since Winter is the dry season around here.  On the way, I spotted this Buenos Aires sign and assume it shows where the cattle stock yards were located back when the whole area was a private ranch.

I rode forest roads away from the Visitor Center, eventually finding my way to Arivaca Road.  A brief bit on the highway and then I detoured back onto another forest road: 232.  I explored this road, found another campsite candidate that I marked on Google Maps and then headed on back to camp.

Got back to camp just short of 3PM and would spend the rest of the afternoon just resting under the shade of my lounge chair umbrella, reading a book.  My coccyx is still a bit sore from the fall I had on the Baboquivari Peak Ranch trail the other day and all the riding probably didn’t help.