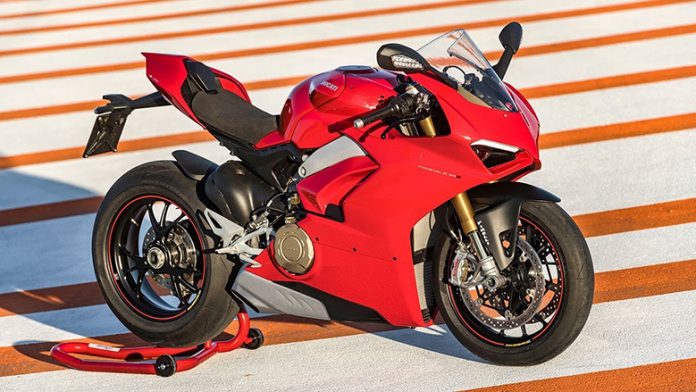 Top-of-the-line components like aluminium forged wheels and lithium-ion batteries are included in the S version’s upgraded suspension. Panigale V4 is a new chapter in Ducati’s history, a “Symphony of Performance and Emotions” that is 100% Italian. First mass-produced Ducati motorcycle with 4-cylinder engine, closely adapted from MotoGP’s Desmosedici.

A fresh “symphony” of all-Italian performance and passion starts with this bike, a new thrilling chapter in the Ducati saga. An engine adapted straight from MotoGP’s Desmosedici four-cylinder engine powers the Panigale V4. Ducati technology, aesthetics, and performance all come together in a single package here. New for 2019, the Corse livery is inspired by the colors used in MotoGP and has a power-to-weight ratio of 1.1 hp/kg. At 1,103 cm3, this motorcycle establishes a new milestone in the super sport production bike market.

The 90-degree V4 arrangement is considered by Ducati to be the pinnacle of motorcycle engine sporting performance. It’s no accident that Desmosedici MotoGP engines use the same solution. The 90-degree V arrangement automatically balances first order forces without the need for a balancing counter shaft to prevent vibration, a solution that, as is well known, adds weight and decreases power consumption. This advantage is only one of several that make this Ducat-selected configuration the most technically sophisticated feasible for an engine that can rev as high as 14,000 rpm.

For improved mass distribution and reduced frontal cross-sectional area, the V layout is more lateral compact than a traditional in-line 4. In addition, the gyroscopic effect is reduced by the shorter crankshaft. All of these factors contribute to the motorcycle’s overall performance, making it seem lighter and respond quicker to steering inputs. The Desmosedici Stradale can breathe easier because to the airbox’s 12.8-liter capacity and the water pump’s ample area within the V. 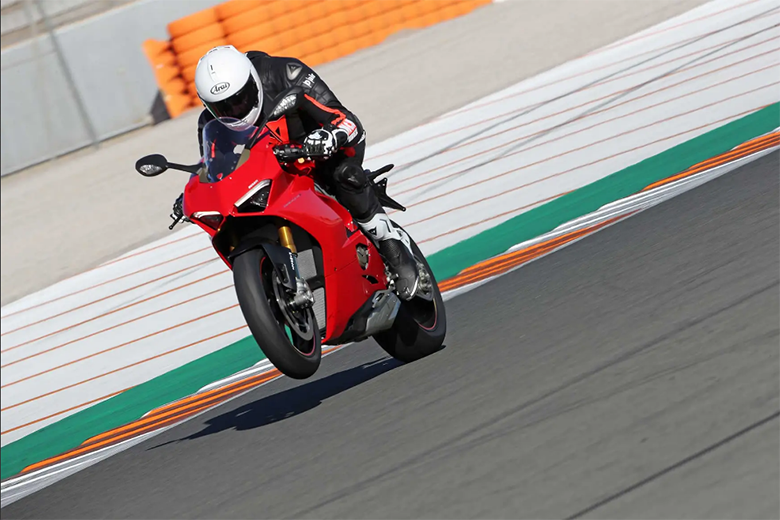 Ducati’s basis is built on seamless engine and chassis connection. Desmosedici Stradale is meant to bank back 42 degrees, much as the MotoGP engines used by Ducati. The weight distribution is improved, radiators may be made bigger, and the swing arm pivot is positioned as far forward as practicable.

Furthermore, the Desmosedici Stradale is a structural component of the chassis. Front and rear cylinder bank heads have been placed into the upper crankcase half to serve as the primary connection points for the main chassis structure. In addition, the crankcase serves as a swing arm connection point for the rear suspension and the crankshaft itself.

With the help of Ducati Corse, a tiny, light, and high-performance engine was created. Ducati’s engine team has meticulously designed and developed a power delivery that maximizes road riding enjoyment and provides top track performance.

Despite being 2.2 kg heavier than the 1,285cc Superquadro twin, the Desmosedici Stradale demonstrates the commitment to lightness that is at the core of every Ducati product.

Gravity-die-cast aluminium engine cases are linked horizontally and constructed as a single unit. The four Nikasil-coated aluminium cylinder liners are housed in the top portion of the crankcase. Oil rings and low-attrition compression rings adorn the 81-mm pistons that slip within the lines. The pistons are made of aluminium and include “box in box” technology, which reduces attrition and inertial stresses while keeping the essential strength and rigidity, all of which are important for a piston.

In addition to its racing-inspired appearance, this engine has a compression ratio of 14:1. Forged steel con rods with a center-to-center measurement of 101.8 mm connect the pistons.

With nitrated steel crankshaft pins ground twice over and offset at 70 degrees, the Desmosedici engines that compete in MotoGP have the same crankshaft design. A “Twin Pulse” ignition sequence is possible because of the V engine’s unique shaft shape.

Die cast magnesium is used for all engine casings in an effort to keep the engines light. The cam covers, oil sump, alternator cover, and two-piece clutch cover all utilize the same material.

The water pump in the engine ‘V’ is powered by a gear train that drives a shaft. Minimizing circuit size, increasing efficiency, and reducing engine weight are all goals of this positioning strategy.

To guarantee that Ducati Quick Shift (DQS) up and down works properly, the 6-speed gearbox has a rotating gear sensor that may be shifted up or down.

To guarantee correct gear selection, the sensor precisely measures the position of the gear shift drum and, as a result, the gear shift forks. In this method, a plan may be devised to only restore torque transmission once the gear change is complete, minimizing unnecessary stress on the gear mesh and ensuring that gear changes are always accurate and quick.

With 11 driving plates and a progressive self-servo mechanism, the hydraulically operated wet clutch is able to compress the friction plates without needing additional effort from the rider. 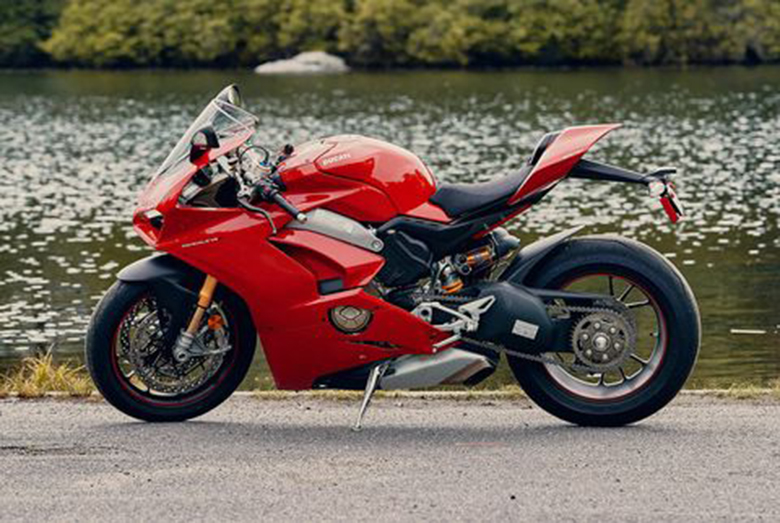 This improves frictional efficiency while also making the clutch lever “feel” more pleasant to the rider. The same mechanism minimizes the pressure on the friction plates, allowing a pure racing “slipper” action and lowering the destabilization of the rear end during forceful downshifting, with the additional advantage of a super-responsive lever under sport riding circumstances.

General Service intervals remain unaltered at 12 months/12,000 kilometers, despite the car’s performance surpassing even that of the Superquadro. The valve clearance examination and adjustment (Desmo Service) frequency continues at 24,000 kilometers (15,000 miles) (7,500 miles).

When it comes to technical specs, the new Panigale V4’s racing spirit is evident, with kerb weights of 195 kg for “S” and “Speciale” models (only 5.5 kg more than the 1299 Panigale S). Traditional perimeter frames would not be able to meet these standards. “Front Frame” has been built, employing the Desmosedici Stradale engine as a load-bearing component, for this reason An improvement on the monocoque design that was created with MotoGP in mind.

By keeping torsional and lateral stiffness distinct, the “Front Frame” design improves the frame’s capacity to respond to stress and to better absorb road surface roughness during cornering, both of which are essential for handling stability. All of this contributes to the Panigale V4’s rider’s comfort and control by making the bike more agile and precise.

The engine is used as a structural element of the frame, which is a significant departure from the layout of standard perimeter frames. Compact and lightweight, the “Front Frame” is attached directly to the top half crankcase of the front cylinder head and the V4 rear cylinder head, which also serves as a fulcrum point for the single-sided swing arm. At only 4 kilogrammes, it is one of the lightest frontal structures on a motorcycle.

A major feature of the Ducati “Front Frame” is that it uses the Desmosedici Stradale engine to produce stiffness, allowing the main frame to be greatly reduced in weight, resulting in a greater rigidity/weight ratio than would otherwise be achievable. In addition, the shorter pillars flanking the engine have resulted in a more compact motorbike, particularly in the region of the rider’s seat.

Magnesium front sub-frames and shell-cast aluminium seat sub-frames attach to the “Front-Frame” at the top and the “Rear-Frame” at the bottom of the frame, making it lightweight. Rising-rate linkage mechanisms are used to connect the Desmosedici Stradale engine to the rear suspension through forged aluminium. An industry-leading 600 mm long, highly triangulated aluminium swing arm with a single-sided cast design controls the linkage’s response to provide optimal cornering performance. 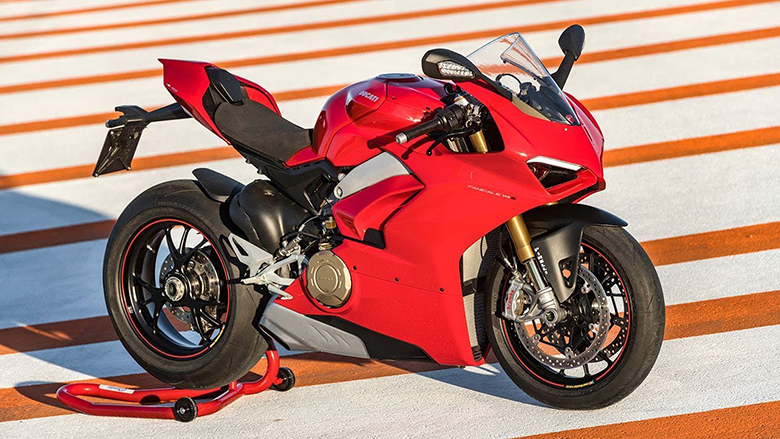