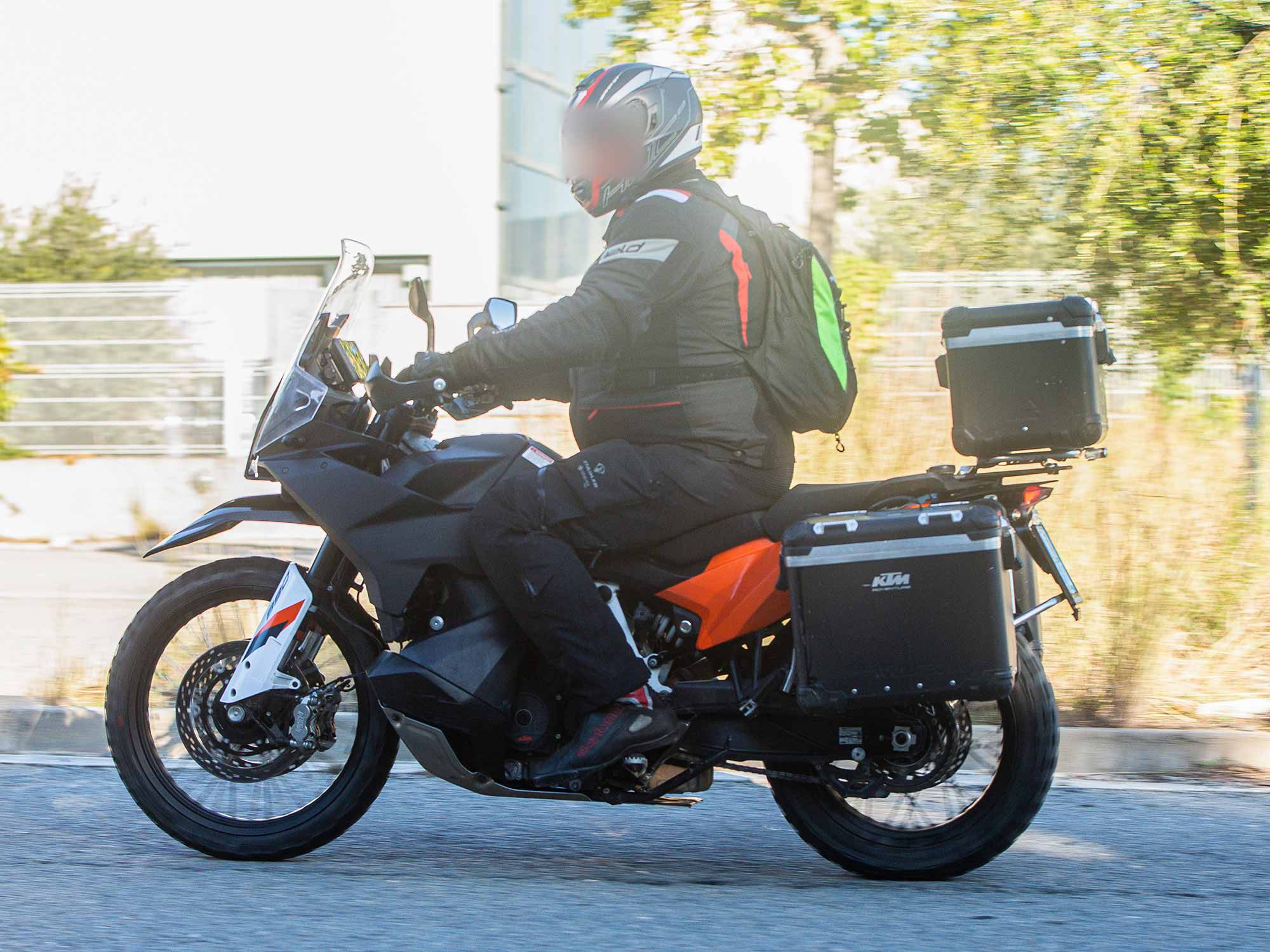 Prototypes spotted in testing suggest KTM will have three models in the range for 2023, including the 890 Adventure R. (Benhard M. Hohne/BMH-Images/) 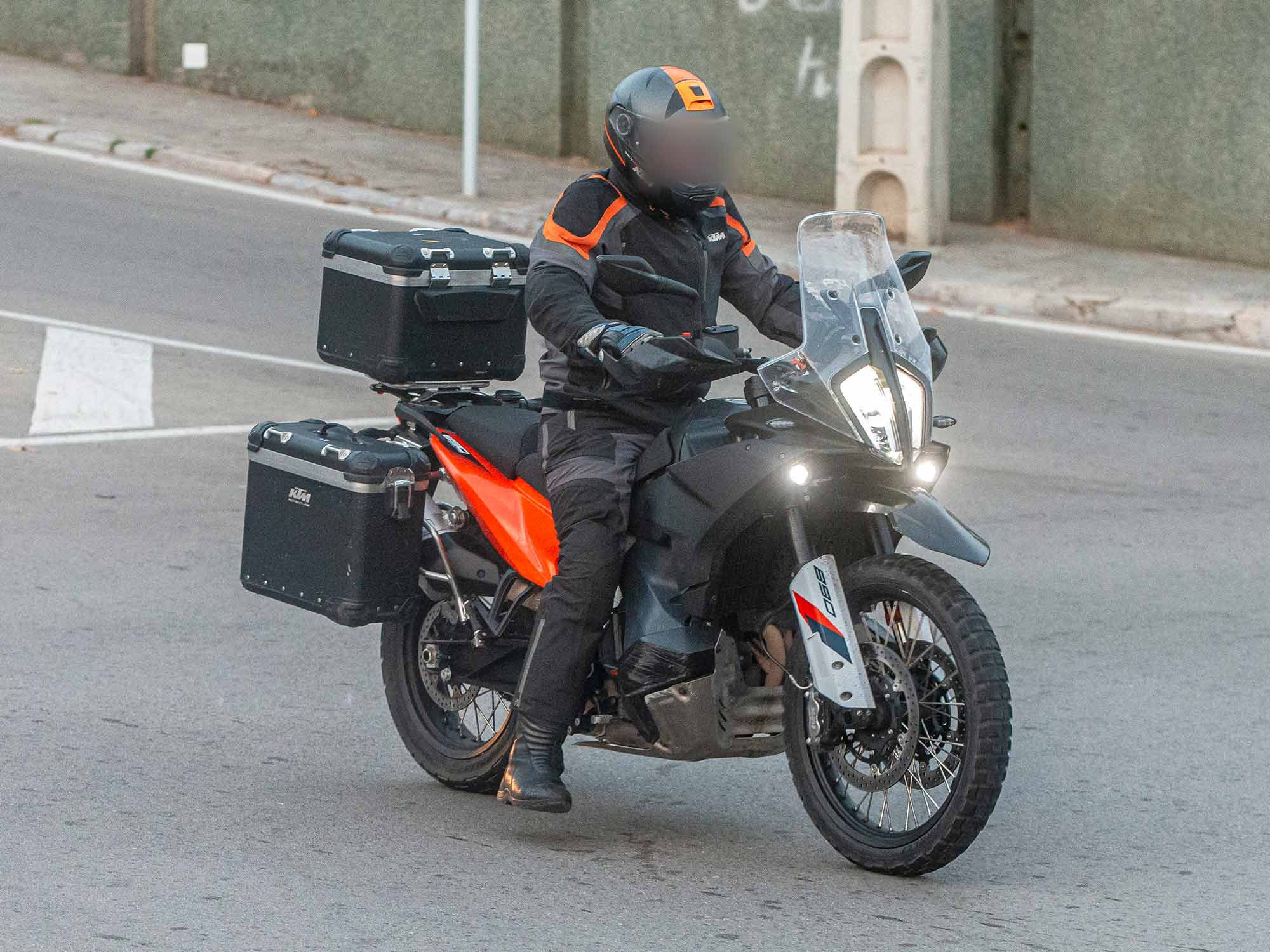 Updates for all models include a new fairing that’s more integrated into the sides and the tank. (Bernhard M. Hohne/BMH-Images/)

The updates shared by all three versions will focus on a new fairing. Where the current bike’s headlight and screen stand alone, the new model has side panels that connect the nose to the distinctive fuel tank, which remains similar to the current model, with two side-mounted tank sections carried low down on the flanks, connected to a shared filler ahead of the rider. This large plastic molding is largely unaltered, other than small tweaks to suit the new fairing. The lowest parts of the tank are shielded by a bash plate made of plastic and alloy that extends around the front of the engine to protect the exhaust, but it’s redesigned for the new version, while the R model gets a more aggressive-looking version made entirely from aluminum. 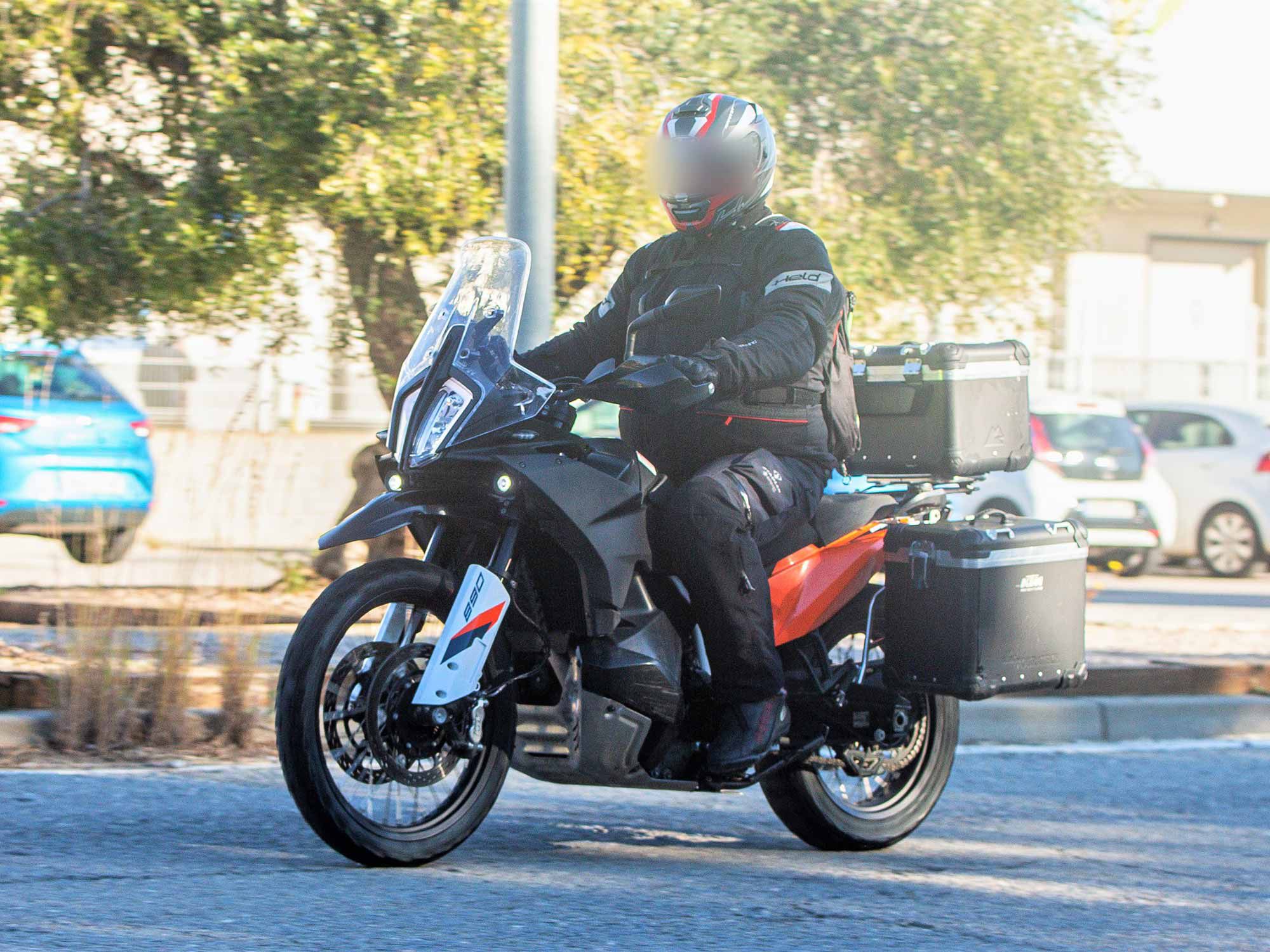 Up front, the headlight is carried over from the current model but is surrounded by a redesigned windshield that extends to the sides as well as upward. As on the current model, the R’s screen is lower than the base model, while the prototype for the new, road-biased S version seen here is lacking its screen entirely. Behind the light, the prototypes appear to have a new instrument panel made up of a single, large TFT screen.

Below the light, the base version of the 890 Adventure, which retains the 21-inch front, 18-inch rear wire wheels of the current model, gains the same high-mounted, motocross-style fender that was previously reserved for the R version, giving it a more off-road look. The prototype in the images was fitted with Pirelli Scorpion Rally tires with more aggressive tread than we see on the current 890 Adventure’s standard-fit Avon AV54 Trailrider rubber, while the prototype for the next-gen R version appears to have Metzeler Karoo 3 tires fitted. 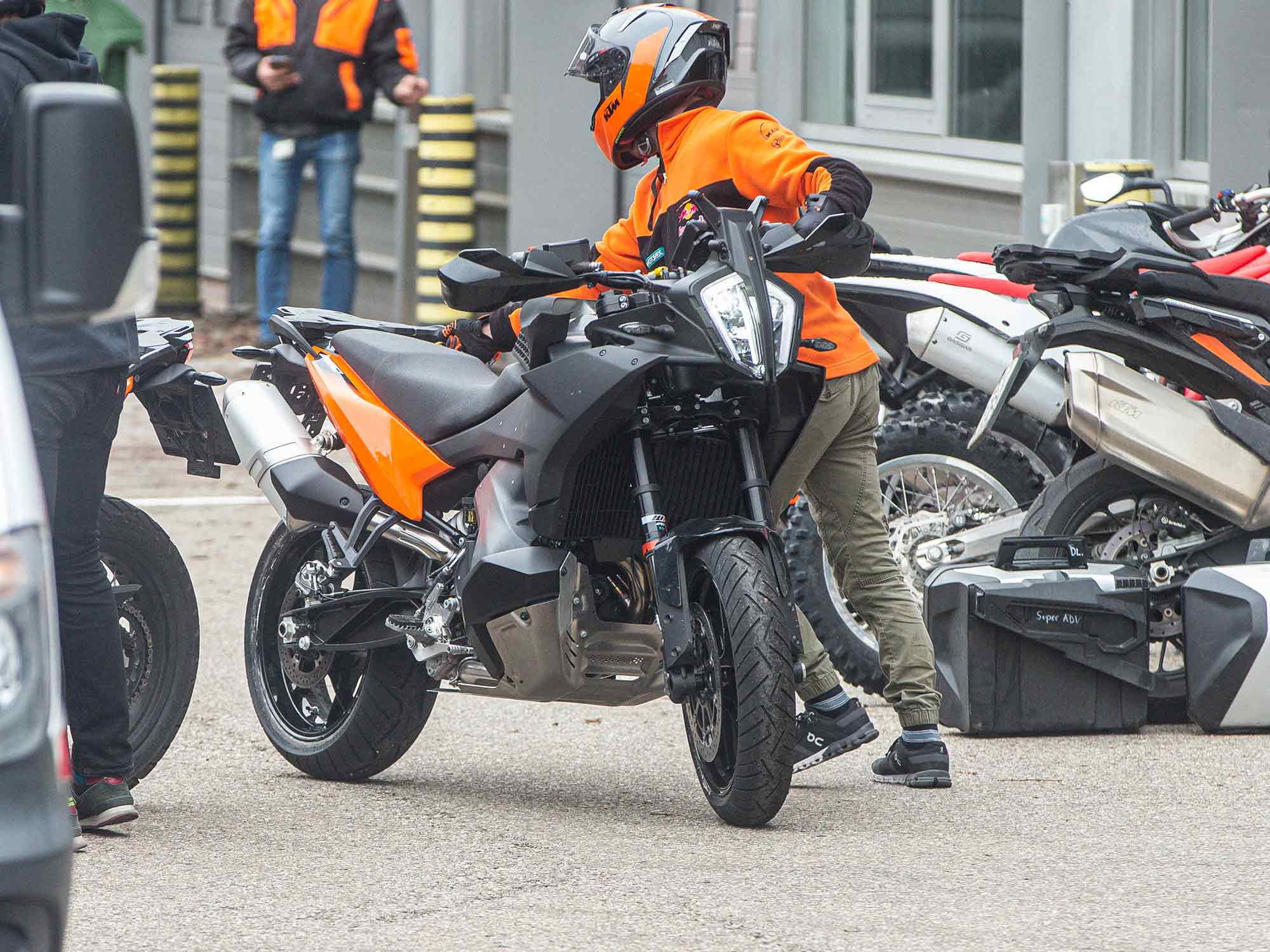 The road-going version ditches the windscreen and appears to wear 17-inch alloy hoops borrowed from the 890 Duke. (Bernhard M. Hohne/BMH-Images/)

The shift to a more off-road look for the standard 890 Adventure is possible thanks to the new, road-biased version spied on test, which is likely to be called the 890 Adventure S to reflect its equivalent model in the larger 1290 Super Adventure range.

It ditches the 21-inch front and 18-inch rear wheels of the other two models in favor of 17-inch alloy rims at both ends, borrowed directly from the 890 Duke and fitted with Continental ContiRoadAttack 3 tires, 180/55-17 at the back, 120/70-17 at the front. The Duke also donates its close-fitting front fender, and the result is a road-only sport-tourer that has an adventure bike riding position, but no real intention to be used away from the asphalt. Like the base version of the 890 Adventure, the new S model appears to be fitted with WP Apex suspension, while the R model—like the current version—has higher-spec WP Xplor kit. 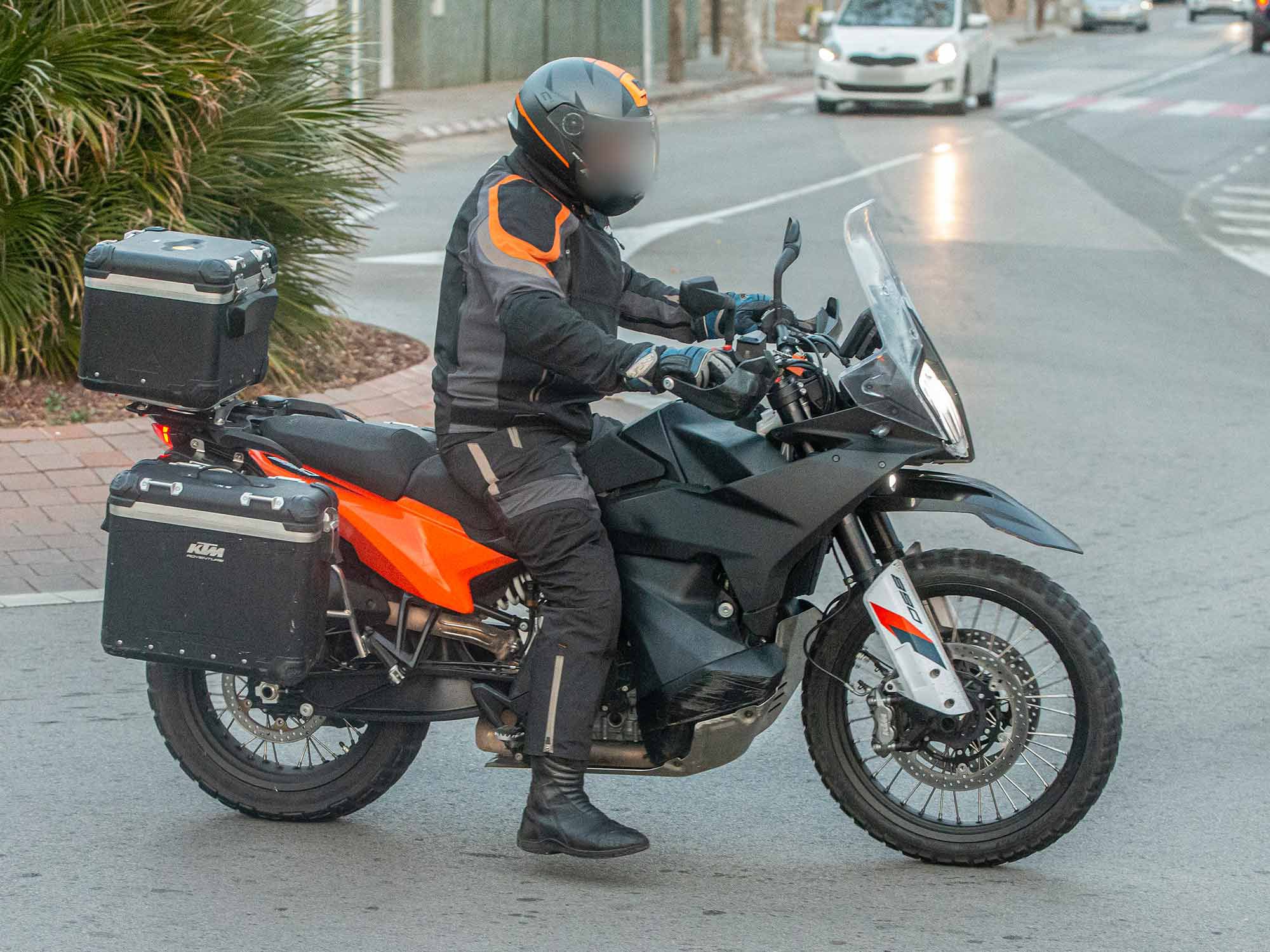 All three models also look to carry over the same exhausts and frame, which suggests the engine will also likely be unchanged for the new 890s. (Bernhard M. Hohne/BMH-Images/)

The three bikes all appear to have the same exhausts as the current 890 Adventure, as well as carrying over the existing frame and the same seat and tail unit. The implication of the unchanged pipe is that the engine is also in the same spec as today’s bike, rather than being the enlarged “990″ version of the LC8c parallel twin that has been widely rumored. That engine, if real, is likely to appear first in the completely redesigned Duke model that has already been seen under test, as well as the enticing “RC 990″ sportbike that shares the same redesigned frame and suspension as the next-gen Duke, while gaining a MotoGP-inspired full fairing. 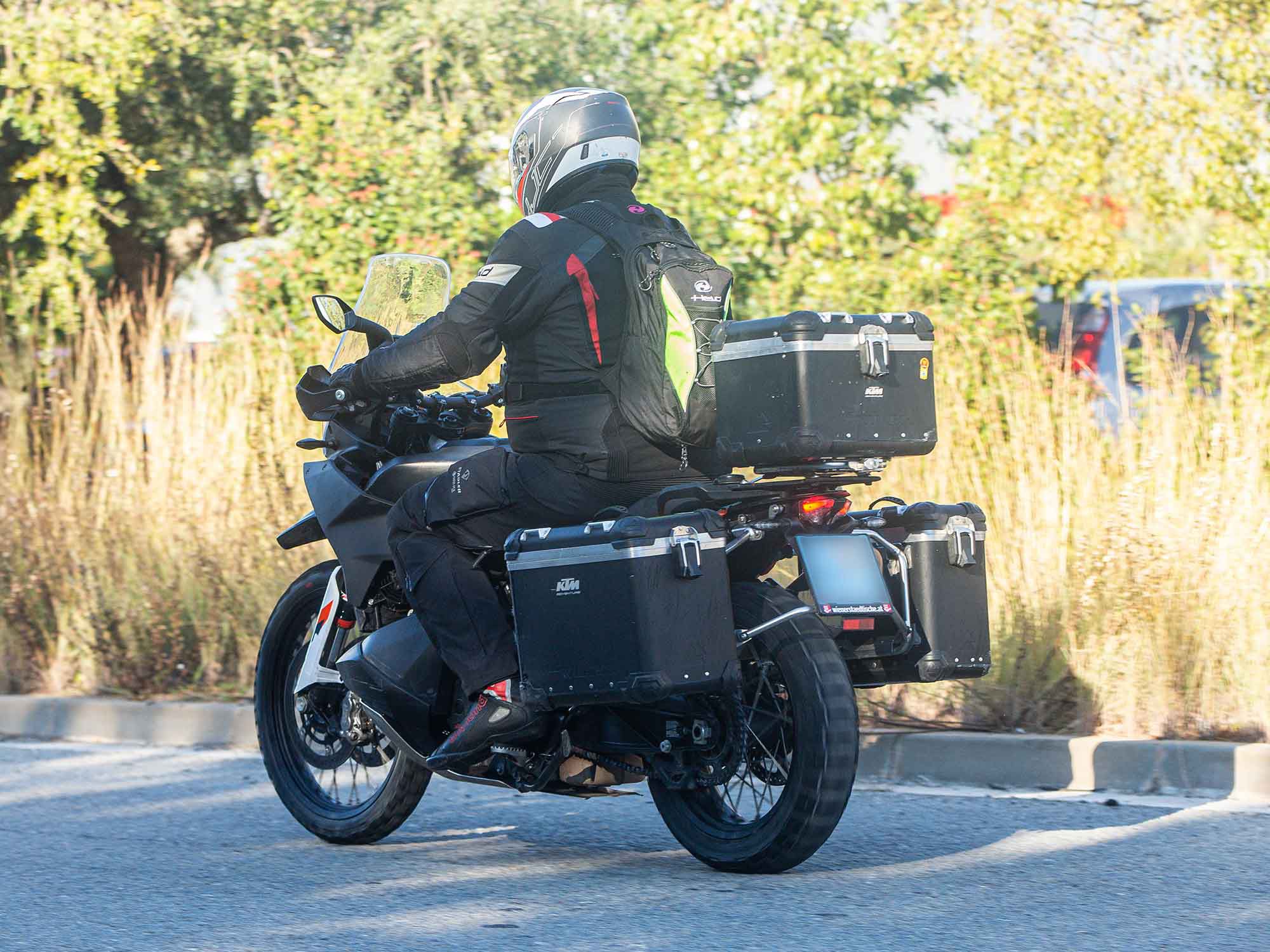 The saddle and tail unit on the prototypes also look unchanged, with an 18-inch wheel likewise bringing up the rear. (Bernhard M. Hohne/BMH-Images/)

With the redesigned Duke, the sportbike, and the new Adventure all looking to join the KTM range for 2023, and further prototypes under test showing a completely new single-cylinder Duke range from 125cc to 390cc, KTM looks like it’s got a busy few months ahead.