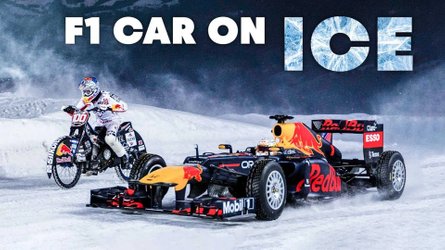 Are you familiar with Speedway racing? If you aren’t, it’s a particularly insane form of motorcycle racing that’s all gas, no brakes, and a whole lot of rider skill at mad speeds. Regular Speedway racing is done on dirt, but if you want to move to a whole other level of insanity, there’s Ice Speedway. That’s Austrian racer Franky Zorn’s specialty—and something he’s won well over 250 trophies in over his decades long career. That’s why, in Red Bull’s infinite wisdom, it brought Zorn together with newly-crowned Formula One champion Max Verstappen for an ice racing meeting in Austria in January, 2022.

It’s the first time that Verstappen has been out and about sporting the #1 on his championship-winning RB8 Formula One car since controversially taking the 2021 championship win. (Side note: We’re not F1Apart, and plenty of digital ink has already been spilled about the controversy, such as this post-season finale analysis by our colleagues at Motorsport.com.)

As many have pointed out, lots of teams would stick such an important race car in a vault somewhere for safekeeping. Instead, Red Bull said let’s stick some studded Pirellis on it and go ice racing at the Zell Am See airport in Austria, and let’s invite Franky Zorn out to show Verstappen how it’s done.

It’s an interesting challenge, to be sure. Ice speedway bikes, as Zorn has explained in the past, are completely different from other types of motorcycles. They don’t just have studs—they can have as many spikes as you want embedded in their tires. Only certain patterns work, and the more spikes you add, the more unsprung weight you have to contend with, as well. Handling on ice speedway bikes is much different than other bikes, simply because there’s so much more weight in the wheels.

If you live in a climate where you get serious amounts of snow and ice, it can be disheartening to have to park your bike for long periods of time—but there are alternatives, if you have the opportunity to explore them. Of course, there’s danger in any form of racing, and any part of your body coming in contact with the spikes in ice speedway tires adds an extra element that’s not present in other riding forms. In a separate video from 2016, Zorn gave some great insight into both ice speedway machinery and racing, so we’ll include a link in our Sources if you want to learn more.