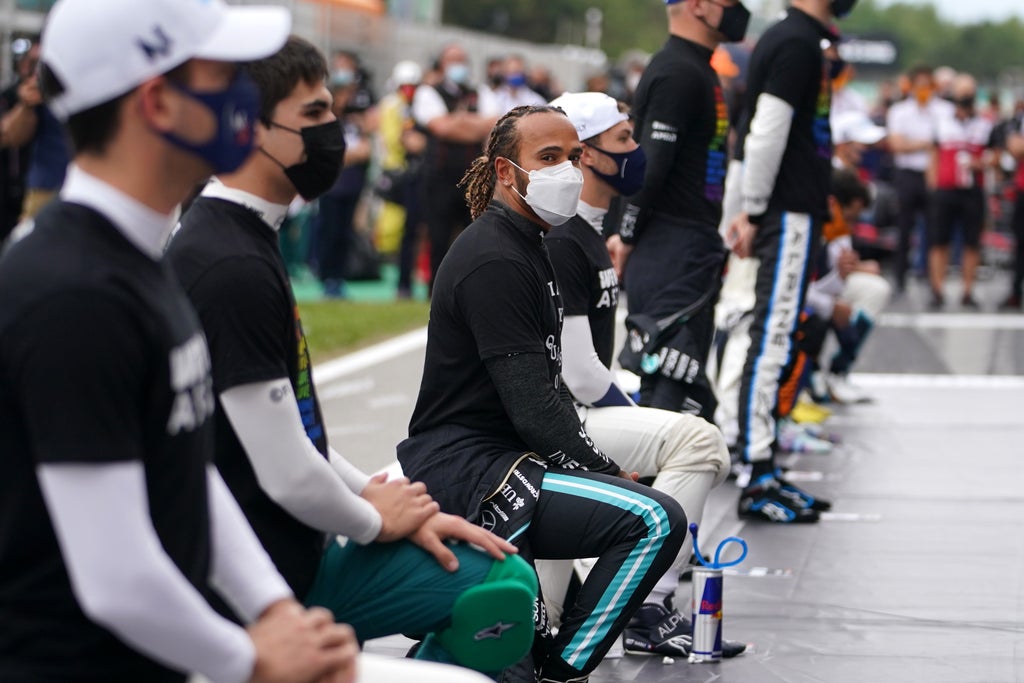 Lewis Hamilton will stop taking a knee at the front of the grid after Formula One bosses revealed they are removing the gesture.

Hamilton – and a number of his fellow drivers – have knelt ahead of every race for the past two seasons in a show of solidarity against racism.

But F1 is set to pull the allocated slot from its pre-race schedule for the new season which starts in Bahrain next month.

The sport has instead vowed to build on the impact of the gesture – announcing on Tuesday that it will extend its funding commitment to the Formula One Engineering Scholarship programme for underrepresented groups until 2025 – and will carry on screening an anti-racism message ahead of every race.

F1’s ‘We Race As One’ branding will also be visible at each round.

“The [knee] gesture was important for the ones that believed that was an important gesture, because we need to respect everyone,” F1 CEO Stefano Domenicali told Sky Sports.

“But now is the time to move on and take some other action. The action is the focus on the diversity of our community, and this is the first step.”

Hamilton, the sport’s sole black driver, has been outspoken on the importance of taking a knee in the fight for equality

It is understood that the 37-year-old – who all but confirmed he will return to the grid after recently ending his social media silence following last year’s controversial decider in Abu Dhabi – will still be allowed to kneel at another stage before the start of the race, possibly by his car.

Hamilton was a driving force in persuading Mercedes to paint his car black in a powerful anti-racism stance.

But it is anticipated that the eight-time constructors’ champions will revert to its traditional silver colours in 2022.

Hamilton is set to be at the team’s car launch alongside his new team-mate George Russell at Silverstone a week on Friday.

But he tweeted on Saturday evening: “I’ve been gone, now I’m back.”

Domenicali said: “There was a total respect on his choice to be silent. I think his battery will be fully charged for the start of the season.

“That is important because Lewis is an incredible asset not only for our sport but for the world.

“Lewis has in front of him a possibility to be an eight-time world champion. So I’m pretty sure he is totally focused on these objectives.”

The Formula One Engineering Scholarships programme – launched following a 1million US Dollar investment from non-executive chairman Chase Carey – has enabled 10 students to begin engineering degrees at universities in the UK and Italy.

Domenicali added: “We are committed to increasing diversity and opportunity within this incredible sport.”