The national police service of Nairobi the capital of Kenya has been officially handed over 100 units of Mahindra Scorpio Single Cab pickup trucks. The news was shared by the Mahindra Group chairperson and Padma Shree awardee Anand Mahindra as he retweeted the original Twitter thread from the Nairobi-based integrated business group Simba Corp.

Mr Mahindra tweeted, “Nairobi, Kenya. We’re delighted to be a part of the Police Service team. The ‘Beast’ under the bonnet of the Scorpio is at their service!” While the original Twitter thread stated, “We are happy to announce that we have officially handed over 100 units of Mahindra Scorpio Single Cab Pik up to the National Police Service. #Mahindra #MahindraGariYaNguvu.”

Mr David Njagi, Chief of the Transport Office of Nairobi also stated his gratefulness by commenting, “We’re delighted with the acquisition of a new fleet of vehicles. Mahindra is a sturdy vehicle and we look forward to serving the nation in these vehicles.”

The vehicles were distributed by the Simba Corp of Kenya which is a Nairobi-based integrated business group that has subsidiaries in motor sales and service, assembly, hospitality, finance and real estate ventures. The Simba Corp Group MD Motors, Naresh Leekha said, “Mahindra is a global brand operational in over 100 countries, we are proud to be the sole distributors in Kenya and inline with the Buy Kenya Build Kenya initiative we began local assembly of the Scorpio Pikups early in 2020.” 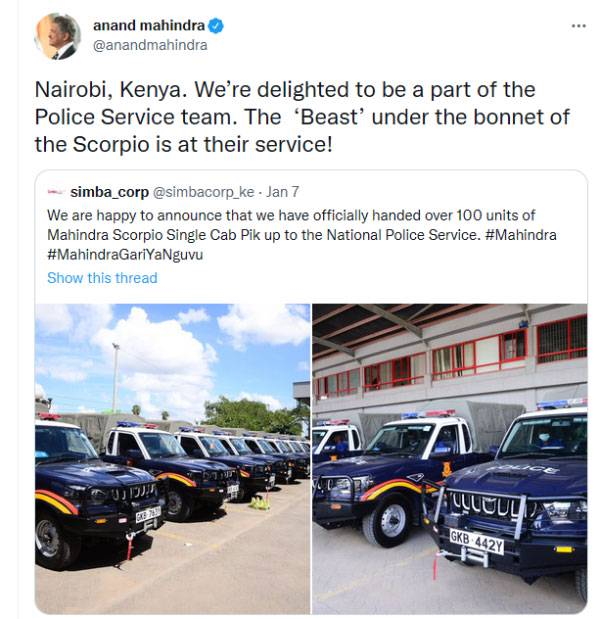 The Nairobian police officers will use the single cab Mahindra Scorpio pickup truck which is painted in the local police vehicle colours of deep blue along with red and yellow stripes on the sides. Additionally, the top half of the cab is painted and it also features a retractable soft cover for carrying people. Powering this pickup truck is Mahindra’s time tested 2.2-litre turbo-diesel mHawk diesel engine which comes paired with a six-speed transmission. The engine churns out 140 PS of power at 3,750 rpm and 320 Nm of torque between 1,500-2,800 rpm. The pickup truck comes available in both 4×2 and 4×4 configurations.

Simba corp has leased the vehicles to the National Police Service and the company head of Government Sales & Leasing Simba Corp Mr. Nixon Oduor has stated, “We’re the 1st Automotive company to start leasing in Kenya, our partnership with the GOK leasing program saw the opportunity for us to lease our Scorpio Pik-ups to the NPS to offer a reliable solution.”

The Scorpio is one of the most important vehicles in Mahindra’s portfolio in India and the fourth generation of this popular SUV which has been long delayed because of the global semiconductor shortage is right around the corner. In addition, Mahindra has also revealed that it might not be discontinuing the current generation Scorpio and will be selling it along the new iteration. The upcoming generation of the Scorpio will be powered by the 2.2L diesel engine that currently powers the XUV700 and the Thar. And it will come mated to a 6-speed MT or an optional 6-speed AT along with the options of rear-wheel-drive and four-wheel-drive configurations.