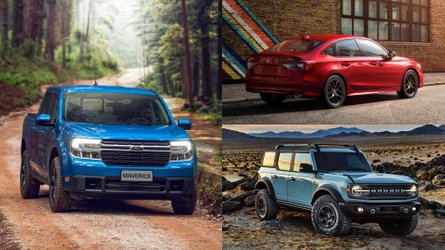 It’s that time of year again. The 2022 North American Car, Truck, and Utility of the Year (NACTOY) awards begin with a field of dozens of vehicles, ultimately picking three winners for car, truck, and SUV. This year, each segment included an electric vehicle among the finalists, including the Rivian R1T, Lucid Air, and Hyundai Ioniq 5. Will electricity win the day?

The answer to that question is a resounding no. The Honda Civic beat the Lucid Air and Volkswagen Golf to claim the car of the year win. The new Ford Maverick was named truck of the year, topping its compact rival, the Hyundai Santa Cruz, as well as the first electric truck to market, the Rivian R1T to claim a victory. In the SUV segment, it probably comes as no surprise that the Ford Bronco walked away with top honors, beating the Hyundai Ioniq 5 and Genesis GV70.

If there’s an air of familiarity in these winners, it’s because this is the second year in a row that Ford claimed two of the three categories with Hyundai in the hunt as a finalist. For 2021, the Mustang Mach-E and F-150 were crowned best SUV and best truck, while the Hyundai Elantra won for car of the year. And though no battery-electric vehicles won an award this year, having one as a finalist in each category is certainly a sign of the changing times in the motoring world.

For 2022, 38 vehicles were initially considered across all three segments. That field was narrowed to 23 semifinalists before the nine finalists – three in each group – were announced in November.

“2021 has been a highly significant year in automotive history,” said NACTOY President Gary Witzenburg. “We have seen groundbreaking and appealing new electric vehicles from almost every brand along with the emergence of new vehicle segments and impressive redesigns of familiar models. Meanwhile, a number of all-new start-up manufacturers are proving they are capable of competing with established automakers even with their first product offerings. Today’s winners represent our collective opinion of the best of what’s available to customers right now, and we sincerely congratulate the automotive industry on a very impressive year.”

The NACTOY awards were first presented in 1994. Winners are selected by a jury of automotive journalists from the US and Canada, representing all sectors of the industry including print media, television, and the internet.