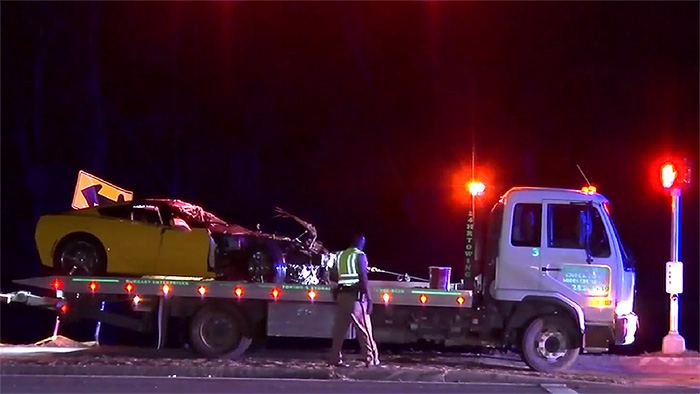 A dive team in Florida found the body of a missing man inside a yellow C6 Corvette submerged in a pond in Clay County near Jacksonville on Monday evening.

The 58-year-old driver, a resident of Cove Springs, Florida, apparently was headed west on Russell Road when he failed to stop at an intersection, jumped a curb, and eventually drove into a pond.

The identity of the man has not been released by police, but they say he had been missing for 24 hours and family members went looking for him, noticed damaged signs near the intersection, and notified authorities.

The Clay County Sheriff’s Office Dive Team responded to the scene near Russell and Henry roads, searching the water for several hours before eventually locating the car with the man’s body still inside. Video from the scene shows the Corvette, which suffered major front-end damage, loaded onto a truck after being pulled from the pond.

Authorities say the crash happened about 2 a.m. Sunday, and a Florida Highway Patrol report noted that the man was not wearing a seatbelt.

UPDATE: A crash report from FHP states the driver of this Corvette was a 58 y.o. man from Green Cove Springs. The report says he did not stop at the intersection here at Russell Road, jumped a curb and drove into a pond just past this traffic light: https://t.co/8Z6MrmNZ4Q @wjxt4 pic.twitter.com/fJ68T4XcWg