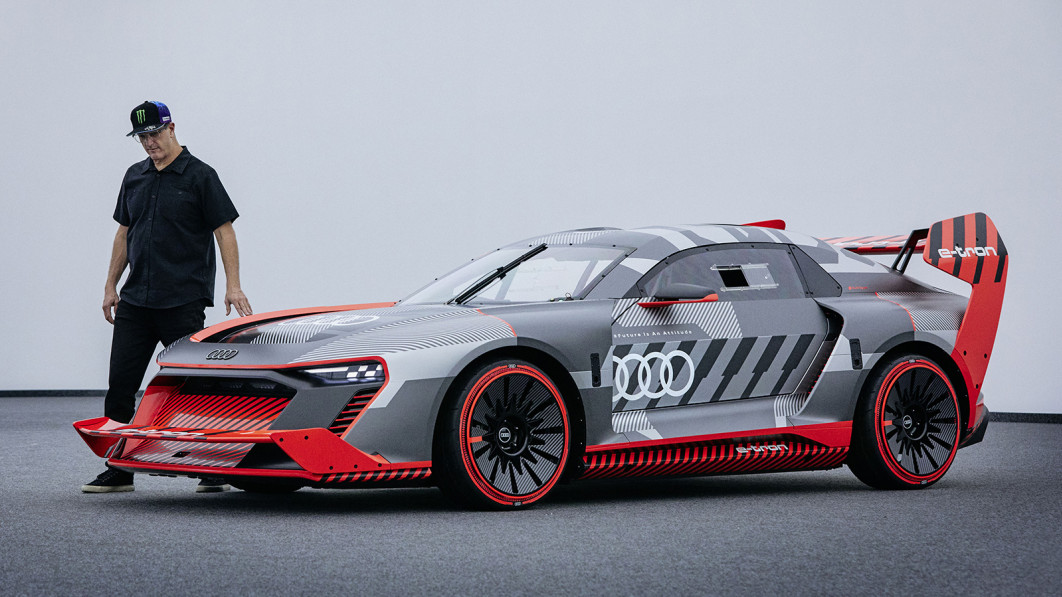 Ken Block may be known for hooning Fords, but for his next video, he’s changing things up. Instead of Ford, he’ll be driving an Audi. Not only that, it’s a custom one-off Audi that’s all-electric. It’s called the S1 E-Tron Quattro Hoonitron, or just S1 Hoonitron for short, and it’s an amazing retro race car.

It’s very obvious that the Hoonitron is based on the Sport Quattro S1 Pikes Peak race car from the 1980s. It’s a two-door coupe with a short wheelbase and outrageous aerodynamic body work from the front spoiler to the rear wing. It also has rally-inspired headlights hidden in the grille and turbofan-style wheels. But there are hints of modern Audi, too, including the large grille, angry headlights, checkered-flag LED running lights and elaborate taillights. Amazingly, Audi went from sketches to full-size model in just four weeks for this project. You can see designers talking with Block about the project in the video below.

Besides the design process, the Hoonitron itself should be quite fast, though we don’t have a clear idea of just how fast. That’s because Audi hasn’t given any specifications about the car. All we know is that it uses two motors and is all-wheel drive. We wouldn’t be surprised if it borrows parts from the RS E-Tron GT, which makes 637 horsepower from its dual motors.

Ken Block will be putting the Hoonitron through its paces in a new stunt video. It will be called “Elektrikhana,” and it should release in the next few months.