The Yamaha Yardbuilt series will soon be celebrating its 10 year anniversary. Originally the brainchild of Yamaha Project Manager, Shun Miyazawa, the initiative has seen builders from all over the globe transforming bone stock, factory fresh Yamahas into all manner of custom creations. In recent years the number of builds being commissioned by Yamaha Europe seems to have slowed, but over in Indonesia, we’re seeing the complete opposite.

The most recent spate of Indonesian Yamaha Yardbuilt bikes was based on a Sport Heritage model most western countries won’t ever see, the Yamaha XSR155. As its name suggests, the XSR155 is a 155cc iteration of the Japanese brands hugely successful neo-retro models. Producing a touch over 14kw of power and 15Nm of torque its performance figures pale in comparison to those of its XSR700 and XSR900 siblings, but in Asia, small capacity motorcycles like this rule the streets. 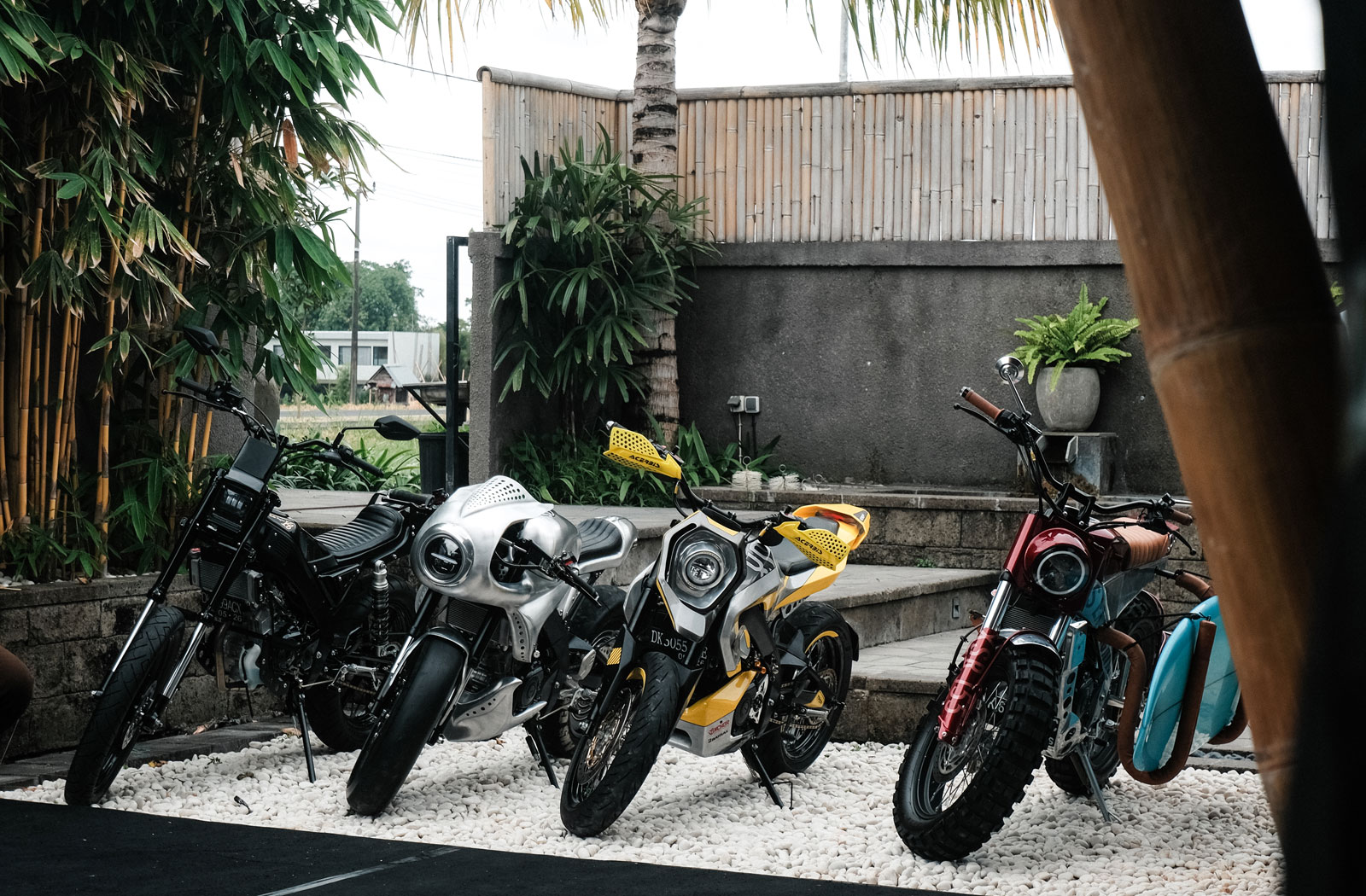 Despite its diminutive size, the XSR155 has a lot going for it. The bike is based on Yamaha’s MT-15 which is powered by a peppy little 155cc liquid-cooled SOHC single. The XSR also benefits from a modern-retro styling package that includes a round LED headlight, classic round gauge with a full digital display, ABS, a slipper clutch and modern suspension.

These custom XSR155s were pieced together for a Yamaha Yardbuilt event named XSR Motoride. We caught up with Yamaha Bali’s marketing manager Fikri to learn more about the project.

How many Yamaha Yardbuilt custom events has Indonesia hosted?

Yamaha Yardbuilt Indonesia was first presented in Jakarta as a project pilot. After that, it was held in Bandung, and now Yardbuilt Indonesia is present in Bali. In each city, we choose different builders with the hope that the character of each bike built is varied.

So far we have collaborated with 12 Indonesian builders, 4 in Jakarta, 4 in Bandung and 4 in Bali. In Indonesia custom bike culture is widespread in almost every city, that’s why we collaborate with several builders in different cities to give a new colour to the Indonesian custom culture. 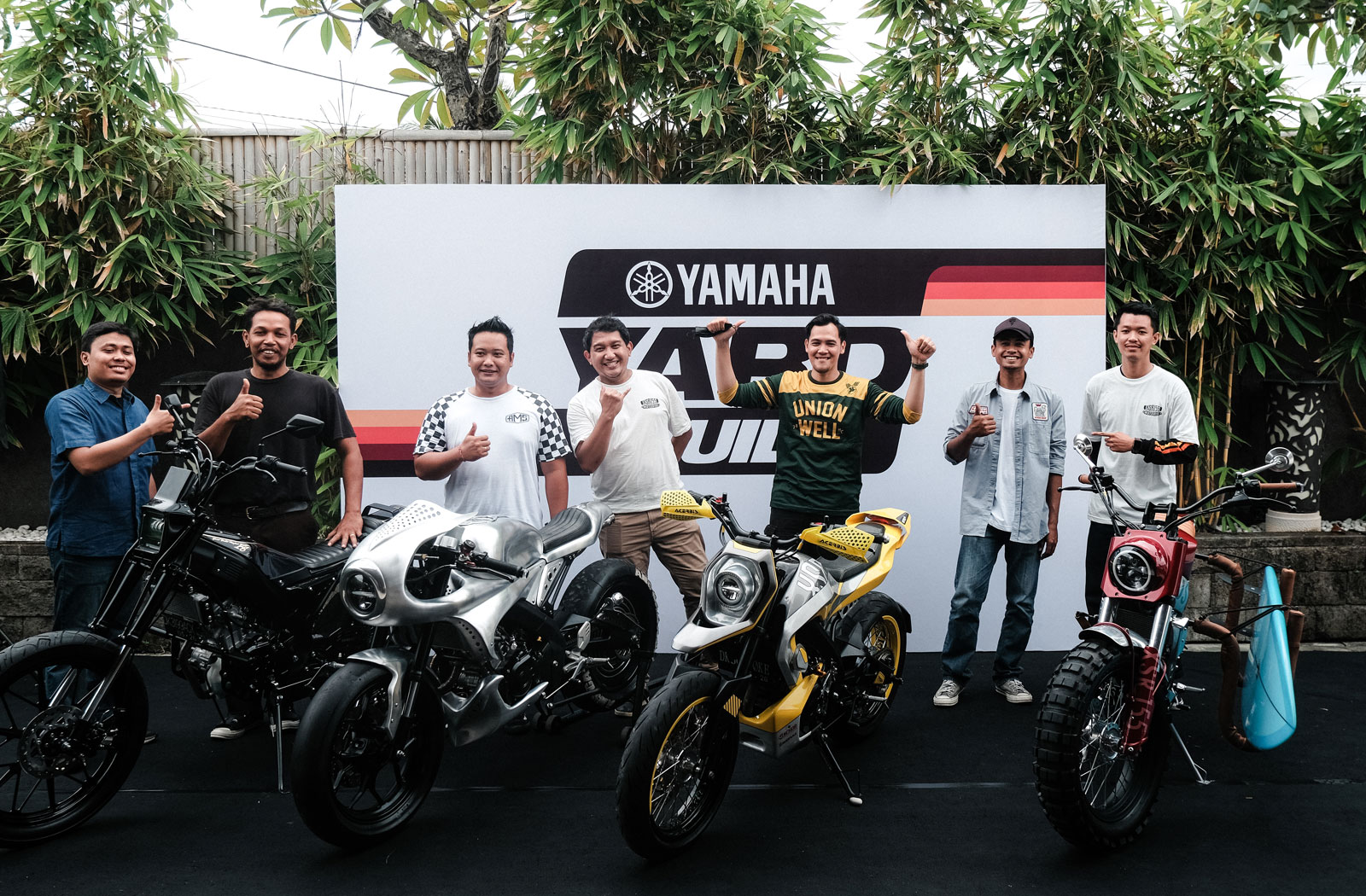 What builders were invited to take part in the Bali Yardbuilt event?

For the launch event of the customized XSR155 in Bali, only local builders were invited. They were the Deus Ex Machina Temple, Treasure Garage, AMS Garage and Kedux Garage. We also invited several Yamaha XSR155 owners to join the event.

The project was named “XSR Motoride” and we invited the builders, the general public and media partners to come and enjoy the beauty of the “island of the gods”. There were at least 20 other participants with their XSR155s on the day.

A press conference with the media opened the event. Yamaha explained the concept of its activities before the builders each presented their custom XSR155 and highlighted the unique characteristics of each bike. After that, consumers, builders and the media went on a group XSR155 ride.

One invited XSR Motoride builder whose work our readers are sure to recognise is Ajus Mulyawarman of the workshop AMS Garage. Like the events other participants, Ajus was given a basic set of rules to adhere to. They were that neither the bike’s frame nor engine could be messed with. Outside of those 2 limitations, they had free reign to rework the Yamaha XSR155 however they saw fit. 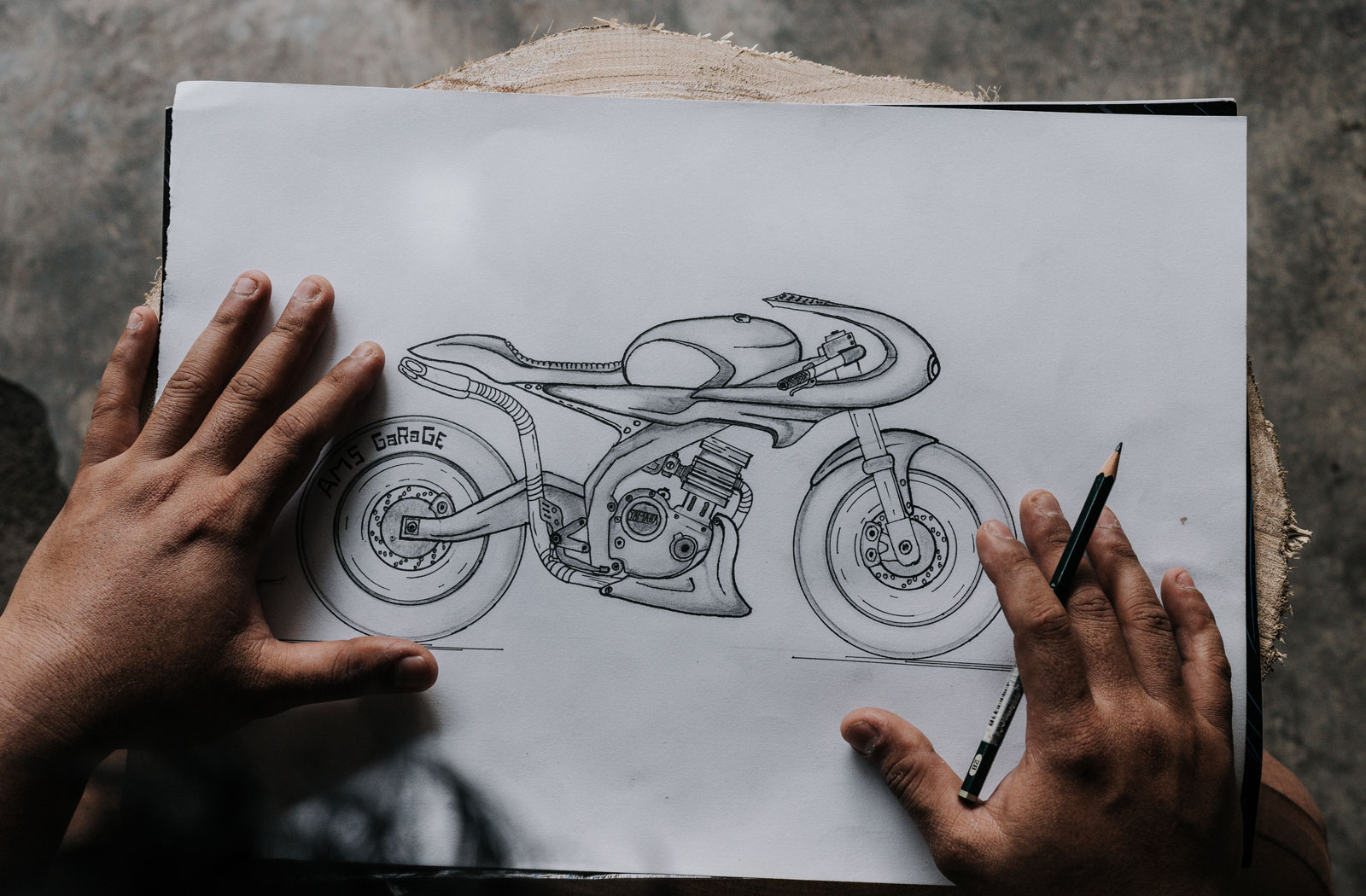 “The philosophy of the build was to create a silhouette that looks fierce like a tiger.” – Ajus Mulyawarman 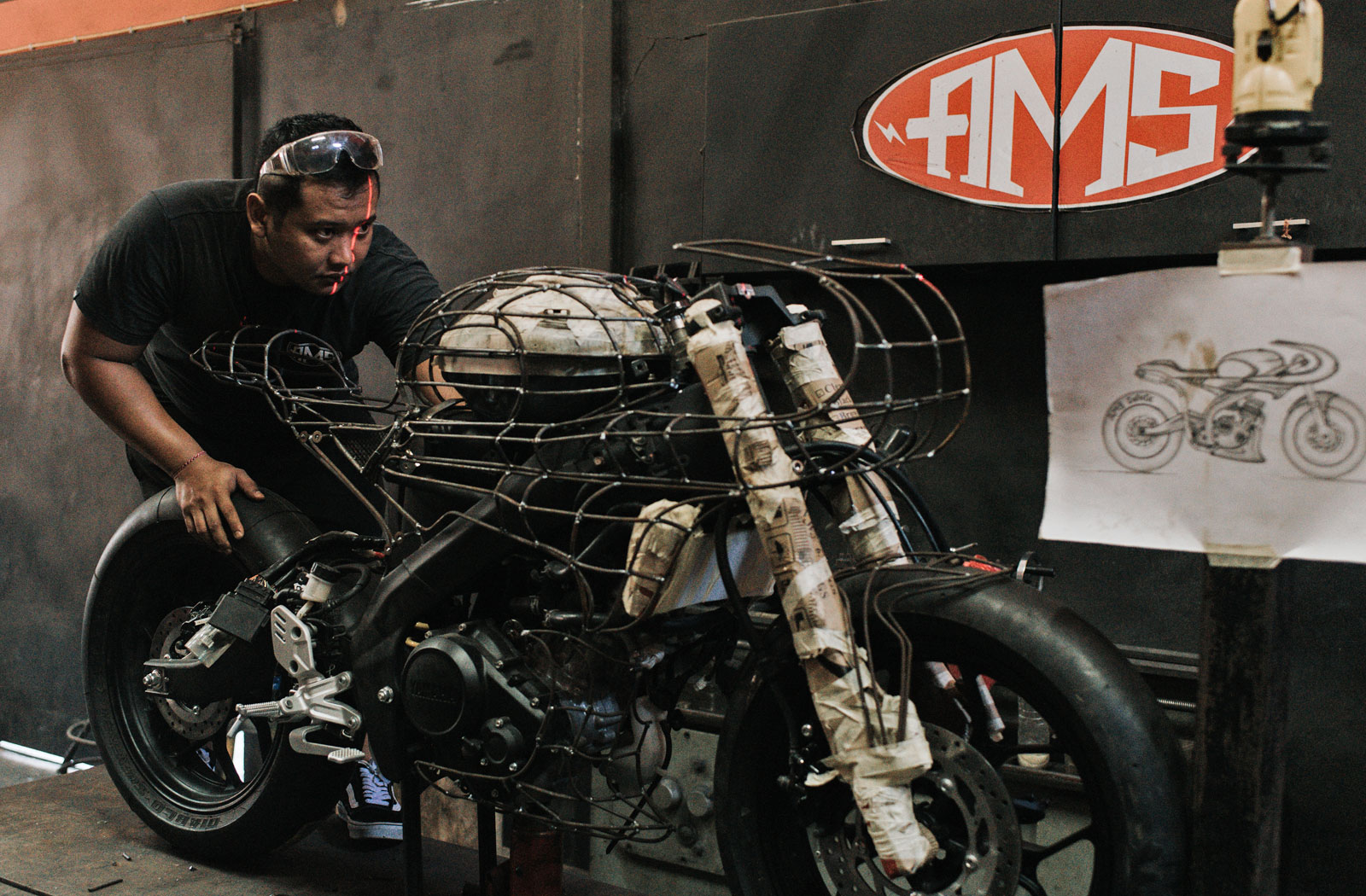 Ajus began the project by sketching a design that transformed the naked UJM into a sleek road racer with entirely bespoke bodywork. As per the brief, the frame and engine remained untouched but very little of the rest of the bike escaped some form of modification. Yamaha allotted each builder a strict 3 month build time, so after the sketch was finalised the AMS team wasted no time tearing into the XSR.

After removing all of the bikes standard bodywork AMS built a buck directly onto their donor bike. Using laser sights and countless hours of measuring, adjusting and rewelding, they built a perfectly proportioned wireframe version of the concept drawing. With the buck complete they then began the arduous task of hand shaping aluminium to form their XSR’s new bodywork. 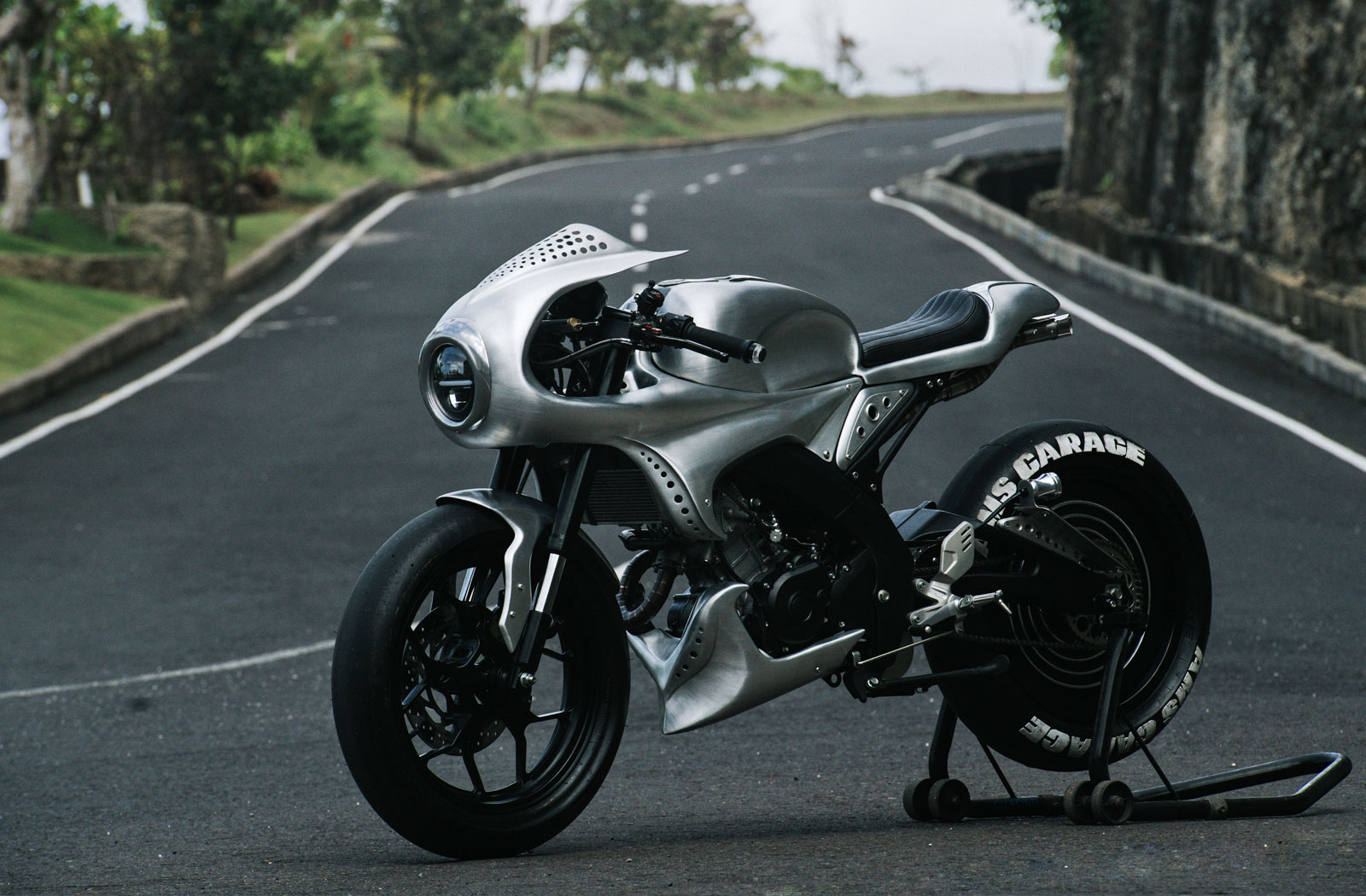 Another trademark feature of AMS projects is a lack of hard edges or sharp lines. This approach adds to the complexity and difficulty of shaping the metal, but as they’ve demonstrated with this XSR155, the extra effort is worth every second.

The Macan’s bodywork was formed in 4 parts. The front cowl is the largest single piece of bodywork. The unit houses the LED headlight, forms the cockpit and frames the radiator, but it doesn’t finish there. From the sides of the radiator, the cowl stretches back to cover both sides of the bike where it serves both a visual and functional purpose. Channels within the bodywork draw air into the bikes airbox while the outer shell hides the XSR’s chunky Deltabox frame from view.

The second bodywork component is the all-alloy fuel tank, seat and tail unit. AMS has constructed the 3 sections as a single monocoque unit. It sits level on the frame and forms the XRS’s bone line. Then, to tie the lower half of the bike to the upper and to add some visual weight, AMS installed a custom alloy belly pan. The final piece of bodywork came in the form of side covers featuring a cross-drilled pattern similar that the ones Yamaha use on the stock XSR155.

In keeping with the rules, the AMS Garage XSR155 engine remains stock. The exhaust however needed to change. For the solution, AMS once again went with the harder option. The new exhaust is an intricate pie cut unit that snakes around the engine before tucking up beneath the tail unit.

The most impressive thing at play here is how the XSR’s new bodywork has been finished, or should we say not finished. To showcase their hard work the Macan bodywork has been left raw. AMS use a mix of brushed and polished finishes to draw attention to key design features and on this bike, there’s no shortage of them.

All of the Yamahas built for the Bali XSR Motoride event are impressive, but the Macan pulls on our heartstrings like no other. This makes it yet another reason why Ajus and his AMS Garage are one of our favourite Indonesian builders. 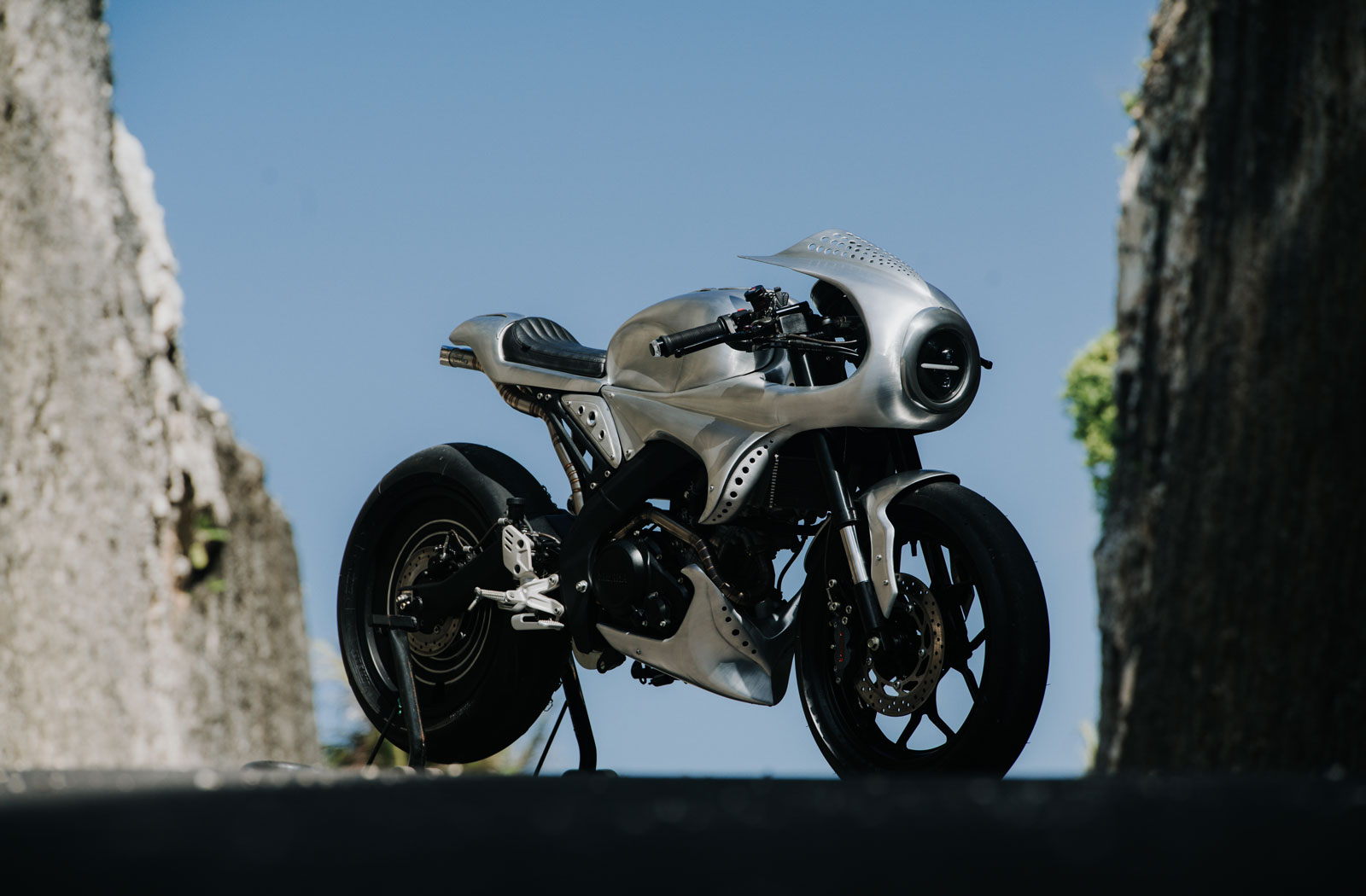