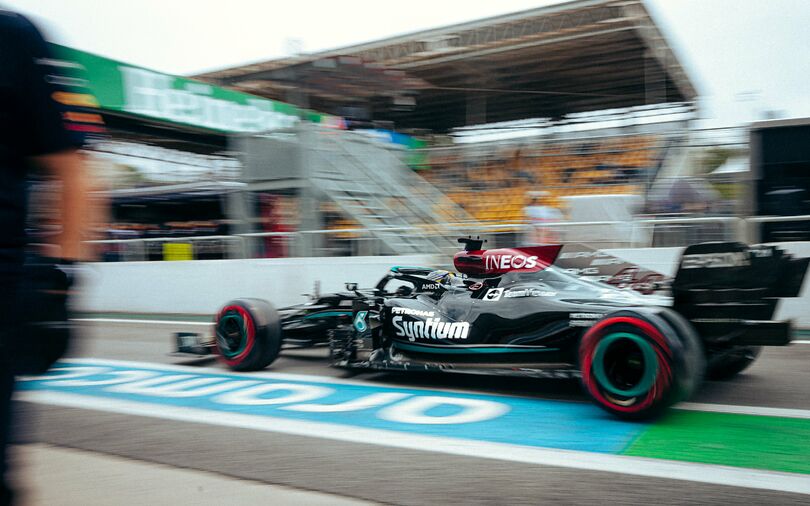 Reigning world champion Lewis Hamilton has been excluded from the qualifying session after the FIA detected a technical infringement with the drag reduction system of his car during the usual post-qualifying inspection.

Hamilton dominantly topped the qualifying session yesterday with a comfortable margin of four tenths of a second ahead of his championship rival Max Verstappen. The regining champion’s eye-catching advantage was explained by his fresh internal combustion engine which he received for the Sao Paulo Grand Prix.

However, during the usual post-qualifying technical inspection, Mercedes was found to be in trouble for an alleged rules breach with his DRS. The lengthy investigation, which was adjourned until Saturday morning, found that Hamilton’s car had indeed broken technical regulations and the seven-time world champion has been excluded from the results of qualifying. The Briton will now start the Sprint race from the back of the grid.

The FIA statement read: „At the end of the first hearing on Friday, amateur video emerged of driver Max Verstappen touching car 44 in Parc Fermé. The Stewards took the time to gather all the available video footage of this incident and finally reviewed in car footage from car 14, car 77, car 33 and car 44 as well as CCTV footage from the FIA’s pit lane cameras, in addition to the amateur footage. The Stewards held a separate hearing in relation to this incident and incorporate the text of that decision herein.

„However, in summary the Competitor of car 44 also agreed that it was unlikely that Verstappen’s actions caused the fault, however they felt that it was an open question.

„The Stewards, however, were fully satisfied, having extensively reviewed the totality of the evidence regarding that incident, that it has no bearing on this case. Finally, therefore, the Stewards decide that car 44 failed the test indicated in TD/011- 19 and is therefore in breach of Art 3.6.3 of the FIA Formula 1 Technical Regulations.

„The Stewards agree with the Competitor that this is something gone wrong, rather than an intentional act or design but did not find there to be mitigating circumstances. Further, Art 1.3.3 of the International Sporting Code states that “it shall be no defence to claim that no performance advantage was obtained”. Therefore, the Stewards order the usual penalty for technical non-compliance of Disqualification from the qualifying session.”

– WADE CONTINUES HIS WINNING STREAK AT THE MOTUL ROOF OF AFRICA